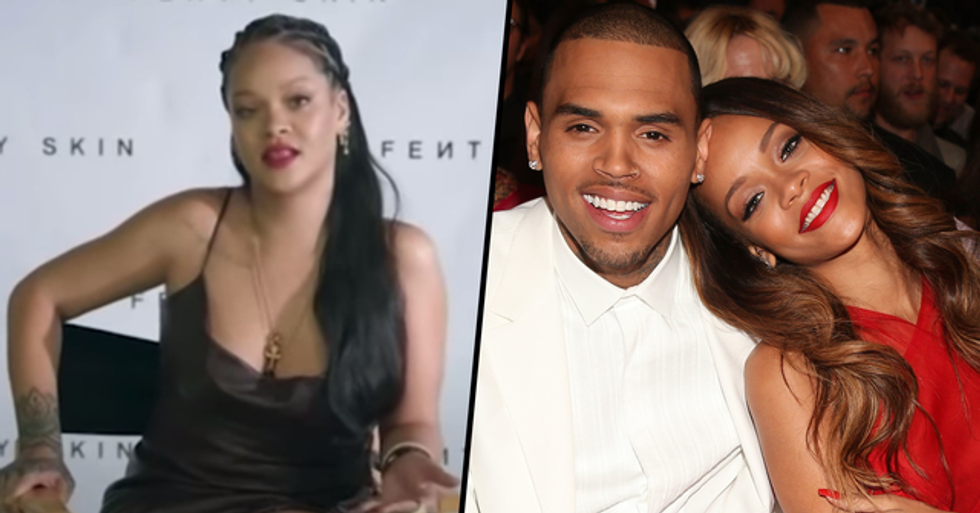 If there's one person that comes to mind when thinking of a celebrity with a controversial past, it's surely Chris Brown - although, maybe controversial is a little bit of a kind way of putting it. This is the man who put his girlfriend in the hospital, after all.

But for a man who's already got a pretty low standard when it comes to respecting others, Brown has still managed to shock the internet on more than one occasion. His latest string of escapades, though less violent, is still indicative of his incredibly problematic view of women.

But in spite of all of this, it seems Rihanna still has a place in her heart for Brown...

Rihanna and Chris Brown had a tumultuous relationship.

Which is sort of a polite way of putting it.

Since their eventual split, many have watched their every move.

The exes still interact with each other a surprising amount.

She can't quite seem to quit him.

Which for many Rihanna fans feels like a real shame.

It seems as though Brown will always have a place in RiRi's heart.

A fact she confirmed today.

Rihanna spoke to Oprah on her "Supersoul Conversations" podcast...

And her revelations about her relationship with Brown were quite shocking...

Chris Maurice Brown is an American singer, just in case you didn't know.

Born in Tappahannock, Virginia, in 1989, he made a big name for himself with a selection of catchy R&B hits such as "No Air," "With You," and "Forever." They were iconic... Not anymore.

He's had a pretty illustrious career.

Brown's been the recipient of many awards, including four Billboard Music Awards and a Grammy. He also holds the seventh place for most entries in the Billboard Hot 100, with ninety-one. Impressive... Not anymore.

But that's not all he's famous for.

Brown managed to hugely up his profile through dating pop superstar, Rihanna. Here, they're pictured in happy times - but their relationship has been marred by one major incident.

In 2009, Brown and Rihanna got into an argument which escalated to incredibly physical violence.

This left Rihanna with severe injuries, which ended up requiring hospitalization. The news of this incident blew up, leaving many fearing for Rihanna and disgusted by Brown.

The pictures of the incident are difficult to look at.

And for many once-Brown fans, this was the final nail in the coffin; in spite of his clear musical talent, he just wasn't the kind of person that you'd want to show support to.

And many pointed out this fact.

@MajorBae @Mo_Cain It’s interesting that this is your take. How many other abusive relationships has Rihanna been i… https://t.co/meRaTfI4rx
— Meech (@Meech)1560271427.0

Even though there's one overriding incident that people point to as proof of Brown's violent behavior, it's clear that it exists as a part of a much wider (and more frightening) pattern.

He seems to love toying with his ex-girlfriends.

And publicly. There must be something about driving fans crazy that he lusts after. Let me fill you in. It all started a couple of weeks ago...

Apart from Rihanna, Brown was also in a relationship with Karrauche Tran.

She's an American actress and model, best known for her roles in web series, The Bay and TNT series, Claws.

The pair met in 2011 and quickly began dating.

They had a very tumultuous, on-off relationship that spanned over the next 3 years - with plenty of incredibly poor behavior on Brown's part.

The pair eventually ended it for good in 2014.

Alongside numerous acts of infidelity, there were yet more allegations of violence and abuse lobbied against Brown after the two parted ways. Surprising? Not really. Disappointing? Very.

And it seems as if Brown doesn't seem to know when to quit.

And by "quit," we, of course, mean, leave his ex-girlfriends (and the entire internet) alone forever.

And he quickly came under fire for leaving some pretty bizarre comments on a few Instagram photos. The account that he's been stalking? Why it's his ex's new boyfriend, Cruz's, of course! It seems as if Brown loves taking the position of a crazy ex. It's not a good look, I can assure you.

But it's the content of these comments that's super weird.

Brown wrote, "No shade boo,, BUT PLEAS STYLE HIM . He look like he shopping of the manikin and trying to bargain wit the sales manager. Retired wrestler spanks. IM F--KING AROUND ... good bless."

Essentially, he's using the comments to try to contact his ex.

And the way that he's attempting to do so? By pointing out some "flaws" that he sees in her new flame's appearance - presumably to try to break the new couple up...

Things got even weirder.

His next comment read, "Nothing bad or major . UPGRADE HIM SIS. I'll take him around to style him. NOT HATE. He just need some game spirit. Peace love and joy. JUST PLEASE UPGRADE YA MAN BOO." It's clear that Brown can't shake Tran from his mind. He posted an Insta story saying, "Is it a sucka move to think about your ex?"

It is, Chris, it really is.

And it doesn't seem like the singer has learned his lesson as he has now set his sights back on Rihanna. Just leave her alone already!

After a breathtakingly beautiful Savage x Fenty fashion show, Chris felt like he needed more than just to watch the show on Amazon Prime. He took to Instagram to comment a smirking face emoji on her picture.

You know that voice we all have in our heads that stops us from doing stupid sh*t? Well, it seems as if Chris doesn't have one of those. Instead, he continued after posting that emoji...

Those were the words he left on the picture. No wonder fans jumped on the attack. After their previous history, even I'm ready to throw hands with this psycho ex-boyfriend. It really did leave a bitter taste in all of our mouths. "Block" buttons were made for trash like Chris Brown.

But it seems Rihanna disagrees.

As she revealed to Oprah this week, "We've built up a trust again, and that's ... we love each other and we probably always will."

What do you make of her confession? Want more from Rihanna? Read on...