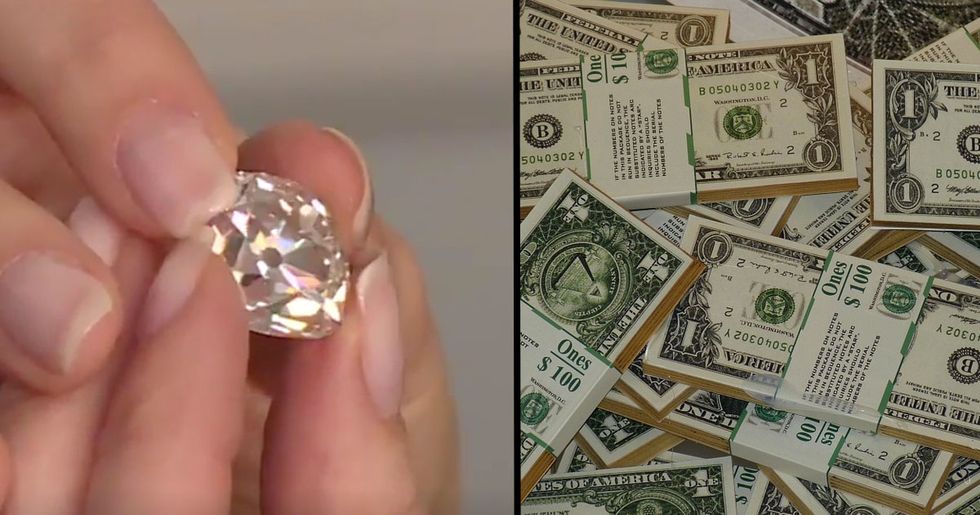 Diamonds have been hanging down celebrity necks since the day humans found out they existed. Naturally then, every other living person on the planet started dreaming of owning one themselves. "Diamond is a girl's best friend," they say.

But recently the natural diamond industry has experienced a hiccup. Natural resources are drying up. Plus, environment-conscious millennials don't want to contribute to the human exploitation that's going on behind the scenes of the industry.

So now diamonds grown in labs are gaining more and more popularity. Young couples and fashion icons are also attracted to their affordable prices. At the moment they're worth half the price of a natural diamond.

Given that natural diamonds might soon be a rarity, Debra Goddard's surprise diamond ring, which she didn't know she had for 33 years, and which showed itself in her most desperate moment, seemed like a true gift from Mother Nature.

You would think after years of associating diamonds with money, and so vanity, the demand for them would decrease.

But it turns out it's only becoming true for the smaller stones. People now are more interested in the large ones.

City A.M. reports that De Beers has recently experienced a drop in diamond sales because of reduced demand for their smaller products.

De Beers reports their sales by splitting the year into 10 cycles.

Even their final cycle of 2018, i.e. the Christmas period, the company sold less than had been expected for the busiest time of the year.

“Rough diamond sales during the first sales cycle of 2019 were lower than those for the equivalent period last year, reflecting higher than normal sales in the previous cycle and the slow movement of lower value rough diamonds through the pipeline."

He also said that for 2018 they had increased their production to 35.3m carats, or by 6 per cent.

But for 2019 they had to reduce production slightly to between 31m and 33m carats.

But this need for larger diamonds can't last forever.

Financial Times, after talking to an industry veteran, reports that natural diamond reserves are likely to run dry before the middle of the century.

Therefore Patrick Evans, former chief executive of Canada’s Dominion Diamond, is about to launch his own company that sells lab-grown diamonds.

He plans to have the diamonds produced in a sunny part of the US with cheap access to solar power, and focus mostly on engagement jewelry, Financial Times says.

Evans made his decision after the industry's giant De Beers announced in September they would now start selling lab-grown diamonds.

Financial Times says De Beers has already acquired a plant in Oregon that costs them $94m and uses cheap hydropower. However, the company's main focus is fashion jewelry rather than engagement.

This new move in the industry has caused lab-grown diamonds to fall in price, compared to naturally mined ones.

But Evans is going to sell high quality engagement jewelry and larger than one carat.

He hopes this plan will help him bring the prices back up, from a 43 per cent discount to only 15-20 per cent.

“We don’t think it’s necessary to discount the product heavily," Evans said. “We think that we’ll be able to achieve natural pricing."

He also added that natural diamond sources will soon be completely empty since no new diamond mines have been discovered.

According to The Daily Beast, lab-grown diamonds are produced using chemical vapor deposition.

What this means is that "scientists fill a low-pressure vacuum with gases, which ultimately react to each other and form a diamond."

Jessica Warch, co-founder of the sustainable jewelry line Kimai which Meghan Markle is a fan of, says the process takes only 6-12 weeks instead of millions of years, as it is with natural diamonds.

Another reason natural diamond sales might soon plummet is the industry’s corrupted "backstage."

The Daily Beast talked to several recently engaged couples who chose to go with lab-grown diamonds.

One such couple was Zach Bass, 32, and Sam Wannemacher, 30. “Zach told me, ‘You understand that the diamond industry is a complete corrupt sham, right?’" Sam told The Daily Beast.

It seems that millennials are not going to let "the darker side of mining" pass by unnoticed.

“There are a lot of ugly practices around diamond mining in Africa, and I didn’t want to buy into that artificial, marketing-created need to buy a diamond," Zach said.

Sam did her own research and completely agreed with Zach.

“I think it’s awful that people are conned into believing they have to get diamonds from the ground," she said.

Apart from equality and environmental benefits, lab-grown diamonds also great because of their much lower price.

As The Daily Beast noted, middle-class couples can instead use the money they saved up "to put down a mortgage, buy a car, splurge on a honeymoon, or just get a bigger ring."

“If we went with a regular diamond, I probably would have only got a carat and a half or something," Sam said, showing off her two-carat stone.

Rush Majumder popped the question on a vacation in Iceland with his four-year girlfriend Erin Butler.

He pulled out the lab-grown diamond ring on the infamous Diamond Beach.

The couple said they had made the decision to use a lab-grown diamond together.

“We heard from a lot of friends who got engaged that [rings] can be really up-priced," Erin said.

“We did our research on the Jerrod’s and the Tiffany’s, and we weren’t into the politics of that, even though the industry has been changing for decades."

“We can tell our kids that a brand in San Francisco made the diamond. How cool is that?"

The only not-so-fun part was telling older family members.

The couple said that most of their family members and friends supported their decision and thought it was interesting.

Older generations, however, found offense with it.

“A lot of people will make a joke after I tell them, something like, ‘I guess my diamond is bloody, then," Rush shrugged.

At a time of such fast-reducing numbers of naturally found diamonds, Debra Goddard's surprise diamond ring of at least 33 years old is a rare gift from Mother Nature.

As reported by The Sun, 33 years ago Debra bought what she thought was a glass ring for $13 at a boot sale. She kept it in a box for all this time until her mom lost all her money to a relative’s fraud.

She took it to a jeweler to value it, hoping to get around $900.

Imagine her surprise when he said it was a 26.27-carat diamond, not glass.

“When I went to the jeweler he nearly fainted and said, ‘Do you know what this is? It’s a diamond,'" Debra told The Sun.

"I sat up all night looking at it, wondering what to do."

Eventually she decided to take it to Sotheby’s, an auction house, who confirmed its value.

Debra said of her luck, “It turned out to be the nearest you can get to perfection. It was like when Del Boy would tell Rodney, ‘This time next year, we’ll be millionaires’. It proved right."

“It’s karma for the bad things that happened in our lives and my mum being robbed of everything."

And what did Debra do with all that money?

She spent it on her mom June Boyle. "She’s had holidays in Barbados, seen Tom Jones, seen Celine Dion in Vegas and bought a fur coat. The money isn’t important to me."

For herself, Debra decided to open a vintage jewellery firm "that hunts car boot sale bargains and wrote a book on her exploits."

She said, “I volunteer with a runaway kids’ charity. If this book makes money, I want it go to them and youth leaders."