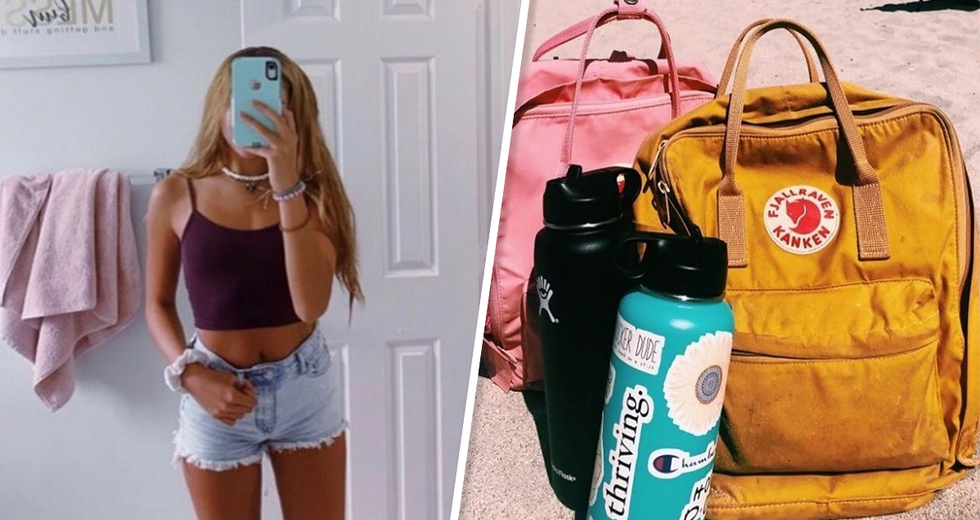 Teens have sorted themselves and each other into categories since forever. In the '50s, if you greased your hair and wore a leather jacket, you were a greaser. My dad came of age in the '70s, and he was called a "hippie" when his family moved to Kansas from California. In the '80s, the basics were called "yuppies." In the early '00s, they were called "hipsters." And now, here we are. Gen Z has come of age, and they've invented a new category: VSCO girl.

VSCO is a photo editing app with aesthetically-pleasing filters and a beachy California vibe. As such, the girls who use it have taken on some particular aesthetic hallmarks.

For decades, the defining attribute of any subculture has been art.

What do you listen to? What do you watch? What do you read? The answers to those questions have defined where you "fit in." Especially in junior high school.

Along with taste, a certain aesthetic has always been desired in order to fit in.

In the '50s, it was the greaser look. Then it was jam bands and long flowing hair through the '60s and into the '70s.

In the '70s, music became a huge factor in where you fit in.

The rock vs. disco debate features in TV show Freaks and Geeks as a throwback to the late '70s/early '80s. Even The New York Times wrote an article about it.

By the '80s, if you had money and bought a Porsche, you were a "yuppie" and played the villain in John Hughes movies.

The aesthetics that ran through the '90s, are back today. Doc Martens, Birkenstocks, sweetheart dresses, even scrunchies are all making a comeback.

The internet changed everything. Now that there's unlimited access to everything, anyone can become part of a niche subculture.

Perhaps the most derided subculture of Millenials is the hipster.

There was even an article claiming that the hipster "subculture" is defined by its lack of definition. Which, therefore, has destroyed civilization, like dividing by zero or something.

Gen Z, the generation after the Millennials, doesn't even remember life before the internet.

You've Got Mail came out in 1998 when the oldest member of Gen Z was about 5. In the movie, Meg Ryan met Tom Hanks in a chat room.

There are Gen Z kids who don't remember the world before social media. Web 2.0 means nothing to them. Friends is "classic TV."

As a result of growing up with the internet to the degree that these kids have, they sort themselves differently than generations before them.

There are fewer social media outlets than there are categories of music or TV shows or movies. So, now those social media labels are applied to girls the way music or politics was applied decades ago.

An "instathot," a portmanteau of Instagram and thot (meaning "that ho over there"), is an overly made up, Fashion Nova-wearing, Kylie Jenner-emulating girl who often poses in tracksuits with contoured cheekbones. So many beauty influencers popped up to serve the look that they became their own community online.

The Kardashians are the most infamous family of the 2010s.

Fittingly, they had a significant effect on how women thought they should look. They defined "hot" for a decade.

It did not end well for most. And, more than that, women across most reality programming and in real life started doing botox and lip injections like my grandma used cold cream.

But, now, we seem to be moving on from the world of Instagram and FaceTune.

Whenever something becomes mainstream, teens create a new thing that their parents don't understand. Millennials had AIM, and now Gen Z has, well, VSCO.

So, what is VSCO?

VSCO is a minimal photo editing and sharing app. The filters have names like J4 and the layout of the app is clean and sparse. The whole thing has the vibe of a California art gallery.

So what is the VSCO girl look, exactly?

The VSCO girl look is long, blonde unbrushed hair, a pastel-colored Hydroflask water bottle, a '90s-looking scrunchie, woven friendship bracelets, an oversized shirt over denim cutoffs or jeans, Birkenstocks or Crocs (worn unironically), Glossier products, and natural-looking makeup. Much like the "normcore" trend of a few years ago, the aesthetic here is deliberately not "try hard."

The VSCO aesthetic is pretty simple and easy to understand.

It's an amalgam of things that have come before and seems to be a direct result of mainlining '90s sitcoms like My So-Called Lifeon Netflix.

The biggest hallmark of the look is the laissez-faire attitude.

This is the polar opposite of the overdone makeup and overtly sexy clothes of the "instathot." The VSCO girl motto might as well be "dress for comfort" and "the less effort the better." The whole point seems to be the appearance of effortless beauty.

The brands associated with the VSCO look are surprising.

Birkenstocks, dad t-shirts, shorts, scrunchies, and Fjällräven backpack seem to be the corner stone of the uniform.

But, along with some retro brands, comes social awareness.

This is the generation growing up with climate change. So these girls usually promote environmentalist causes: they carry metal straws and Hydroflasks covered in stickers from Redbubble.

These girls listen to Billie Eilish, wear comfortable shoes, and pull their hair back.

Isn't this the most appropriate response to the decade of Kardashian dominance? Not dressing for men at all?

But, the subculture isn't without its problems.

As with most social groupings, race and class come into play. A lot of their internet parlance is taken from black communities, and buying all of this stuff isn't exactly cheap. Although this stuff is chill, it's still name-brand and expensive.

One of the biggest influencers in this space is Emma Chamberlain.

Her videos have minimal editing, no big hook, and the lighting is mostly natural. And, she has millions of followers.

But, she's naturally beautiful, white, and skinny, so most of the things that separate her from the old guard of influencers are rather surface level.

In one video, she talks about her "self-care" practices and how she's not going to fart as much in her videos moving forward. The ultimate idgaf move for girls: acknowledging flatulence.

There are elements of this trope that play into that: a girl who's naturally pretty but "doesn't know it," can eat whatever she wants without gaining weight, and hangs effortlessly with the guys.

The Kardashians, by contrast, are obviously "high maintenance."

The Kardashians are the kinds of girls that men claim to dislike. They openly spend time and money on their bodies and faces and clothing. The opposite of "chill."

But the VSCO girl look is just as difficult to achieve, if not more so.

Instead of announcing the work you did to get ready, the glam squad, the hour-long YouTube tutorial, and body sculpting, the VSCO girl look demands that you're already beautiful, already skinny, already have long wavy hair and that none of that took any work.

Both things take an extraordinary amount of time and money to achieve.

Somehow, the Kardashian model feels more inclusive. It doesn't demand skinny or blonde or white. There are obviously issues there, too, but it feels more honest, despite the accusations of lying through plastic surgery.

Every trend has its backlash.

Look back through the history of female beauty and fashion trends, one can see the overly done '50s, the hippie '60s, the glam '70s, the chaotic '80s, the grunge '90s.

After this wave of VSCO girls, we're bound to see another Brat Dollz phase.

Such is the cycle. But, maybe this generation can at least use their trends for good, like the reusable water bottles and metal straws.