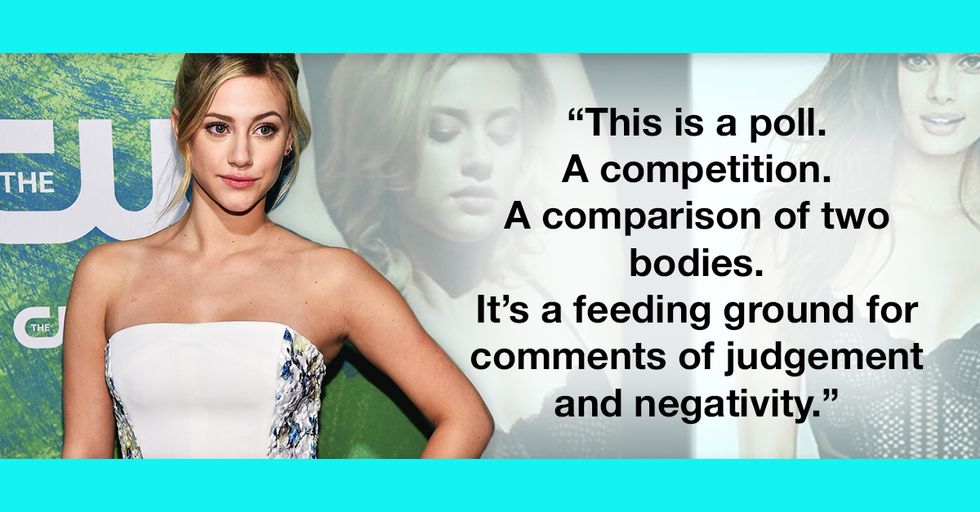 While it is the age of radical body positivity, there are still — and sadly will probably always be — pockets of the Internet where you can find body shamers galore. They are especially vocal and vile when it comes to discussing the bodies of famous women (which they shouldn't even be doing in the first place).

The latest famous female victim of online body shamers is Riverdale's own Lili Reinhart, who plays Betty Cooper. But she wasn't going to take the abuse. She used her powerful voice to fight back against the haters.

Lili Reinhart rose to the spotlight as Betty Cooper on Riverdale.

Not only is she a talented actress and a TV star, but she's an outspoken voice for women's rights, body positivity, and ending the stigma surrounding mental illness.

Now, Reinhart has joined the ranks of other famous women, including Ruby Rose, who've been harassed by body-shaming idiots.

Ruby Rose was the subject of disgusting tabloid reports that spread rumors about her weight and commented on her body. Of course, Ruby Rose is one strong woman and clapped back with strength and grace.

Our girl Rihanna has had to face her fair share of haters as well.

She's one of the most confident, beautiful women in the world no matter what size she is and she wasn't about to take crap from anybody about her body.

With body shamers, you just can't win, and that is something that superstar Mandy Moore learned firsthand.

She was raked over the coals for looking too thin in a picture she posted on Instagram. Needless to say, this goddess stayed strong and shut down her haters with one simple message that roughly translated to "GTFO."

Now, Lili Reinhart is facing body shamers much the way these other women have.

In a recent episode of Riverdale, Reinhart, as Betty Cooper, sported a set of lacy black lingerie. The body shamers of the Internet found a model wearing a very similar set and posted them side by side...

Reinhart posted the pic to her own Tumblr with a powerful statement in reaction. "So," Reinhart starts. "I’ve seen this picture all over my Instagram for the past two weeks. With captions like 'Lili vs Model,' 'who wore it better?' 'Which one is hotter?' It’s been pretty hard to avoid. And I think it’s time I finally said something about it. "It’s disappointing."
"This photo is being posted by fan accounts. The same fan accounts who love to talk about the amazing female friendships on the show, girl power, Veronica’s inspiring feminism, body positivity, etc. "And that is the most hypocritical s*** I’ve ever seen. "This is a poll. A competition. A comparison of two bodies. It’s a feeding ground for comments of judgement [sic] and negativity.— 'Betty is fat,' 'that’s not flattering,' 'the model looks way better.'
"It is a perfect way to fuel this delusional idea that it’s still okay to put women on a pedestal and compare them. "I’ve asked myself so many times… how do we actually learn to love our bodies? How do we as a society, openly and privately, accept that all bodies are truly beautiful and there shouldn’t be a specific body type that is considered 'the best' or the most beautiful? "It’s so easy to say 'embrace your curves,' 'everyone is beautiful!' — but to actually put that into practice is the hard part. It’s easy to convince others that we think this way, but it doesn’t mean anything if you don’t actually believe that. "I do not have that model’s body. I’m fully aware of this. I don’t have a thigh gap.. a 24 inch waist.. toned arms or abs.
"I am not her. And how dare anyone assume that I should look like her. "And the people who are commenting on this photo and weighing in on this poll… are the ones who are comparing themselves to the model as well. It’s so easy to point out someone else’s 'flaws,' isn’t it? Because it makes us feel better about ourselves and about our own insecurities. "It’s upsetting to see all these young women who proclaim to be feminists participate in something that represents the exact opposite. To them I say: You are the problem, don’t you get it? You are promoting the idea that this model is what all women should look like and that it’s not okay to look like anything else. "This is why we have eating disorders. This is why young teens are suicidal about their body image. This is why people have body dysmorphic disorder. This is why there aren’t nearly enough plus size models in the industry. "I hope that this makes you reconsider the next time you feel the need to comment on another woman’s weight or figure."

It's safe to say Reinhart shut down the hypocritical body shamers and came out on top.

Let this be a lesson to anyone who is even considering commenting on a body that isn't yours. Just don't do it. Be a bigger, better person than that.