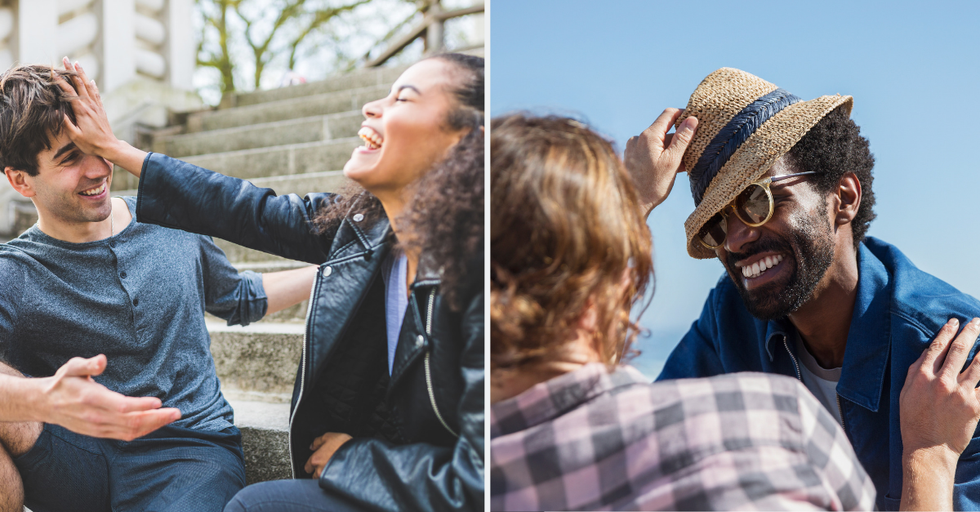 According to a Study, Making Fun of Your Significant Other Can Help Strengthen Your Relationship

Let's talk about relationships. It's a topic that comes with a lot of opinions – by people both in them and not in them. While there are many wonderful things about having a partner – on demand back rubs, someone to turn off the TV when you fall asleep during your latest Netflix binge, someone always in your corner – they are also a lot of hard work.

Having a healthy, functional and loving relationship isn't effortless. Nobody (and I mean nobody) has the perfect relationship. No one wakes up every single day in the honeymoon phase. There will, inevitably, be times when it's hard. But the beautiful thing about a relationship is that you're choosing to be in it. You choose each other every single day, despite one another's flaws.

Speaking of those flaws, there's a new study that says that it's actually healthy to roast one another. This sounds like dangerous territory, but it's science, you guys!

Yes, you did read that correctly.

It was reported that Appalachian State University conducted research which concluded that roasting your partner and having them roast you back can be good for your relationship. Rejoice! You can finally poke fun at why your S.O. wears socks with sandals!

Now listen, I'm all for teasing my partner.

But it kind of feels like people will hear this and run with it. So let's get into the nitty-gritty facts of the matter.

Why in the world would it be healthy to make fun of each other?

So how can you tell if it's all in good fun?

If you tease them about always watching the next episode of your favorite show without you, and they laugh, then it's probably in good fun. “Make sure that not only your personalities mesh, but your humors do too—so no one takes offense, feels hurt, or gets defensive," Laurel House told Cosmopolitan. House is a celeb dating coach and podcast host.

But it also apparently works, so what do I know? I'm a mere pleb.

You have to use your common sense.

Be aware of your tone and feeling. If the "harmless jibing" begins to feel tense, then maybe roasting each other isn't the best for your relationship. I'm no relationship coach, but this seems pretty obvious.

Apparently, roasting each other can yield wonderful things in your relationship.

It seems like it's worth a try. Here are some ways in which roasting can help your relationship.

For one, it allows you to talk about serious things in a lighthearted way.

“Bringing up problems in this fashion helps you to softly address the hard stuff. Often times, just by shedding light on an issue can let your partner know you’re not into it," House said.

This is a really good point when it comes to discussing the hard stuff in a relationship.

Sometimes you need a little cushion when it comes to bringing up tough subjects. Gently teasing can actually open up a very real dialogue.

It can bring you closer together.

Roasting can be done in fondness. There's something really sweet about gently teasing your partner about their quirks. All of those little things make up the person that you love, right? Teasing each other good-naturedly can be playful and fun, and actually bring you closer together.

Also, who doesn't love teasing someone?

There's a difference between being mean and teasing. When you tease your partner, there's love behind it. And if there isn't, well that's a whole other story.

This study is great news for all the people out there who love to troll their bae's.

Roasting your S.O. is like an inside joke of sorts. When you're with someone, you start to learn everything about them. It's fun to tease each other about those little specifics that only the two of you know.

Pointing out all those weird little things about one another is a great way to show you appreciate each other.

“When you roast each other’s quirks, you are effectively pointing out the little, sometimes ignored sides to your personalities," House says. "Those quirks tend to be the things that you love the most about your partner."

“If you ask the roaster what they find most attractive about their partner, there’s a good chance it could be the exact same thing that they roast them over," says House. Now isn't that interesting?

Who knew roasting could be so scientific?

Relationships are funny, aren't they? Now, before you go off and roast your bae, why not have a good laugh at some of these hilariously accurate tweets about what it's like to be in a relationship?

This sounds about right...

Relationships are mostly you apologizing for saying something hilarious
— Brian Gaar (@Brian Gaar)1352926304.0

Everyone in a relationship thinks that they're the funniest. It's just the way it is.

Why do so many boyfriends wear horrible jeans?

I can do some damage in a Target. This is totally my idea of a wild night.

My husband is on the roof - only a few inches away from an insurance claim that could completely change my life.
— Stella G. Maddox (@Stella G. Maddox)1414962050.0

Oh, sorry, what? I got carried away there.

Being in a relationship means always knowing when to restock the cheese.

Two people who take cheese very seriously are meant to be together.

Well, this is relatable.

Even if we're the person who's like, "I want you to find love if something ever happens to me!" we're all secretly thinking this tweet.

Relationships are an expensive way to watch someone slowly like you less and less.
— shelby fero (@shelby fero)1400556385.0

But also a true thought? We're just telling it like it is.

The best comfort is always anything dog-related.

This is how a healthy, functional relationship works. Take notes, people!

Phew, it's getting hot in here.

And they say it takes work to keep the spark in a relationship! Liars, all of them.

This is the perfect description of a relationship.

Relationships are a lot like sports, at first you're really excited but by the end you've eaten too many hot dogs and are too drunk to argue
— paperwash© (@paperwash©)1422117485.0

Most of us have been there.

My Girlfriend and I interpreted the dress code a little differently. It said casual?! #yesthosearemyjammies https://t.co/u26t7Hi9bg
— Cyanide (@Cyanide)1498917289.0

This couple has two very different ideas of what "casual" means.

Truly laughing at this...

You know it's serious when you apologize for the Salem Witch Trials.

It's always better to be honest.

You can't fault someone for just telling the truth!

Rent is too dang expensive nowadays. Moving in to save money? Sign me up.

Wow, no truer words were ever spoken.

This tweet is a big 2019 mood. Share this with your partner! And maybe try roasting them the next time you see them.