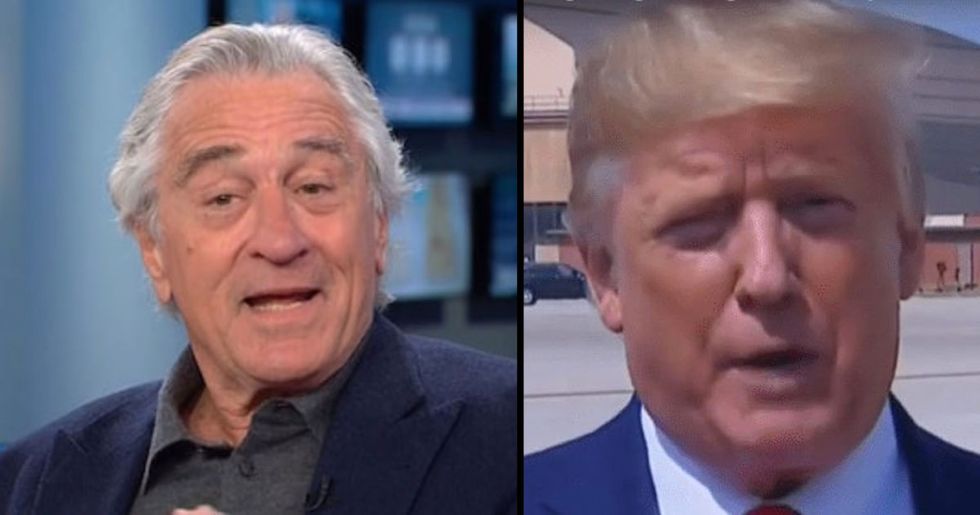 What struck me most about Robert De Niro's interview with Brian Stelter wasn't what he said about Trump or what he said about Fox News. It did not surprise me that De Niro isn't a Trump or Fox News fan. I mean, who in the liberal arts is? De Niro, just like The Simpsons, just like the guys on SNL, and just like most of the actors in Hollywood thinks that Trump is a bit of a nut-job.

What did strike me in this interview, though, was De Niro's seriousness, his passion, the frustration that lay behind his eyes. The seventy-six-year-old actor defended his use of bad language by saying: "This is a terrible... we're in a terrible situation."

I sat back and I thought, "this honestly feels like a movie." I'm sad to say that I'm not talking about the likes of Shark Tale or The Intern - the kind of De Niro movie that the country is currently embalmed in is certainly more of fedora, revolver sort of show.

Continue scrolling to read about what De Niro had to say and why he was saying it...

It all kicked off with Trump's impeachment.

Nancy Pelosi, The House Speaker, announced on Tuesday the 24th, that Congress would begin an impeachment inquiry of President Donald Trump.

Why is Trump getting impeached?

via: The White House

Well, I mean... it's unlikely that he will actually get impeached. Unless the president actually went out and committed a felony in broad daylight, it would be incredibly difficult to impeach Trump. No U.S. president has been successfully impeached before, although three have been tried. The impeachment inquiry is over a whistleblower's claim that Trump tried to get dirt on Joe Biden's son, Hunter, from the Ukrainian president. In an attempt to clear his name, The White House released a transcript of the telephone conversation in question - despite it being an edited version of the call, it's still pretty damning

Trump's politics have been dirty from the outset.

No one in the State government truly believes that Trump is an honest presidential candidate that plays by the rules. But, until now, it has been difficult to get hard proof. Although it's going to be basically impossible to make a case strong enough to convince two-thirds of the Senate to actually convict him. I mean, heck, it would be next to impossible to convince two-thirds of the Senate to go against him even with strong evidence. Politics is a messy business and it's in many of the Senators' best interests to have Trump in power.

This latest scandal to hit Trump's Office comes not long after the inquiry looking into his eldest children. Donnie and Ivanka were called into question for the interference of Russian Intelligence with Trump's inauguration. The assertion that Trump was getting Ukranian President, Volodymyr Zelensky, to look into his rival makes this look even worse.

Andrew Johnson was the first president to have a call for impeachment in 1868 but was acquitted. Then Nixon faced an impeachment inquiry in 1973 over the Watergate scandal. Richard Nixon did not fancy seeing himself getting booted out of the White House, so he resigned. In 1998, it was Bill Clinton's turn after he was accused of lying under oath and obstructing the cause of justice in a bid to keep his affair with Monica Lewinsky under wraps. Clinton was pretty popular though and the fact that he wanted to keep his private life private was excused and he got away with it too.

De Niro doesn't seem to think that Trump is going to get impeached.

When the actor was asked by CNN's Brian Steltzer whilst appearing on Reliable Source whether he was "satisfied by what the democrats are doing" in spearheading an impeachment inquiry, the actor looked unenthused. De Niro replied to Steltzer: "Yeah I think they have no choice but to have an impeachment inquiry - it just has to happen. There's no way around it." These do not sound like the words of a man that's hopeful that the impeachment will happen.

De Niro knows a dodgy character when he sees one.

I'm not sure that any actor has appeared in as many gangster movies as De Niro. Robert De Niro first appeared as a gangster in The Godfather II in 1974 and has been playing wrong 'un men that are part of America's corrupt underbelly ever since. This guy knows a thing or two about corruption.

SNL has made plenty of sketches about the corrupt nature of Trump's politics.

In the spring and summer of 2018, De Niro actually starred in a number of sketches as Robert Mueller, Mueller being the guy who wrote the Report on the Investigation into Russian Interference in the 2016 Presidential Election before retiring from the special counsel in the Department of Justice. Sadly, despite how damning the report is, hardly anyone read it. And with the media being every American's main source of knowledge, the 3.3 million people who tuned into Fox News following the report, got a very warped version of events. Perhaps it was in playing this role that De Niro started to think about how corrupt the relationship between Trump and Fox News really is...

During De Niro's interview, the actor stated: "He's worse than I could ever have imagined. This guy is crazy, we've got to get him out." Ever the careful reporter, Steltzer went on to get De Niro to be aware of the impact of his word choices...

"When you say crazy, do you mean in the medical sense?"

Steltzer seemed keen to get De Niro to clarify what he meant by "crazy," asserting that it "gets criticized pretty quickly," throwing around terms like that. An undeterred De Niro responds by considering whether he means medically crazy. He says: "Possibly medically too... I didn't think that before but actually..."

It was after witnessing Trump speak live that he began to question his sanity.

Of course, Trump's wall-promising, immigrant-hating, and general twitter-ranting would have anyone questioning his sanity. Yet it was only when De Niro saw him in the flesh that the actor thought that this guy might actually be crazy. Explaining the encounter to Steltzer, the actor said: "When I saw him out in front of the helicopter waiting to go somewhere and talking endlessly and sweating and sweating and not even [gestures wiping face,] I mean this guy is not even aware - he should at least ask someone for a handkerchief." This insentient rambling of Trump has unnerved another Hollywood actor in the past. Earlier this summer, Woody Harrelson gave an interview wherein he talked about the unbearable dinner party that he attended at Trump's house. According to Harrelson, no one could get a word in edgeways.

Having played so many dodgy gangster types in his time, Robert De Niro knows a bad egg when he sees one. And De Niro's not the only one to consider the president's behavior "strange."

Trump's recent language has been called out as being thuggish.

Following the threat of his impeachment, Trump has been firing sarcastic shots left, right, and center. This is doing nothing to prove to the general public that he is not, in fact, corrupt.

As much as De Niro thinks that Trump is mentally unwell, he also thinks he's a cunning manipulator.

When asked by Steltzer whether he thinks that Trump would get impeached or resign, the actor insisted that Trump will not go down quietly. De Niro expressed that "he'll say it's rigged. This and that, he'll find something. This guy has done everything possible. Much worse than I thought ever."

The president is not playing by the rules, he's inciting fear, and he's throwing his weight around. This is a boss that clearly does not want his employees to think that they can go and say anything they want about him. He's threatening to get Schiff done for "treason"(?) and he threatens "big consequences" for any whistleblowers. Hmm, this feels familiar...

Trump is seriously acting as though he's a character from Goodfellas.

Will a civil war will break out if Trump gets impeached?

This isn't West Side Story, Mr. President. I'm sure your supporters would sooner be sat at home watching Fox News, scrolling on their phones, and sipping Moutain Dew than start fighting in a civil war over your impeachment.

Is he the president? Is he a businessman? Is he a gangster? Or is he a seventy-three-year-old ex-TV star that has the worst fake-tan and combover wig that any of us have ever seen?

But it's no wonder that people like De Niro feel like having Trump in power is a national disgrace.

Towards the end of his interview with Steltzer, things got heated and De Niro ended up swearing. The subject of Trump and Fox News clearly incite anger in the Hollywood actor. De Niro did offer an apology, but he didn't really seem to care that he used the profanities on a live Sunday morning broadcast.

Every gangster needs a mob behind him.

In the case of Trump, this guy has certainly got Fox News eating his orange slices. This is something that De Niro seems well aware of. His anti-Trump stance has not been ignored by Fox, who often makes digs at the actor.

When asked by Steltzer about his views towards Fox, De Niro said: "F*ck 'em, f*ck 'em."

With the endless hateful spiel delivered by Trump and Fox News, it comes as no surprise that the people have started using ugly language too. This really is an ugly time for American politics and it looks as though the sleeves are just getting rolled up.

De Niro isn't messing around when he talks about Trump.

What's clear from watching the interview (watch it below!), is that De Niro is clearly deeply troubled by the actions of our current president. His final comments strike a real chord. The actor is visibly frightened as he mutters: "This is terrible, we're in a terrible situation."

See for yourself what De Niro had to say about Trump and Fox News.  Continue scrolling to read about the anti-Trump roadsign that appeared this week. I've got to say, whoever was behind this was nothing short of a genius!