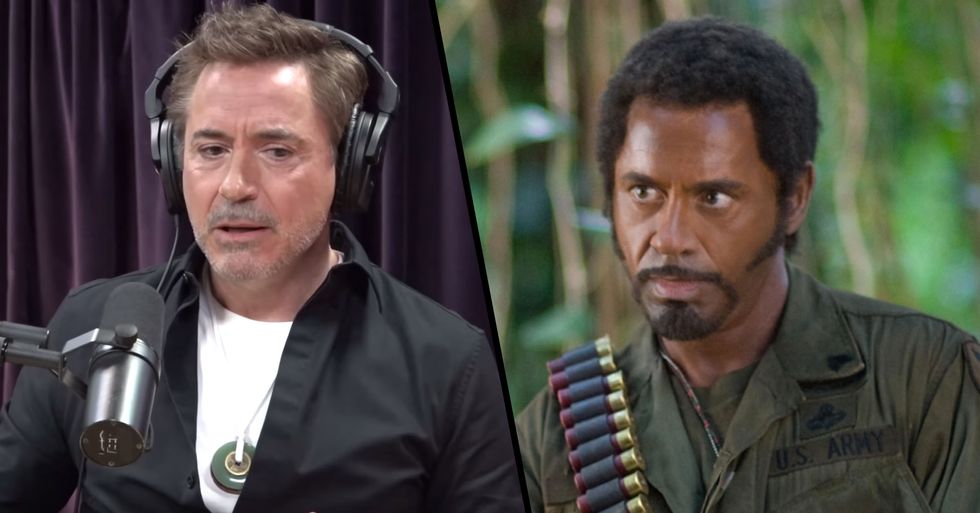 Robert Downey Jr. Has No Regrets Over ‘Tropic Thunder’ Blackface

Blackface seems to be an issue celebrities just cannot get right. From Instagram influencers to the Prime Minister of Canada, there seems to be a never-ending slew of high profile people who think changing their race for entertainment purposes is acceptable. And one prime example that still remains problematic is that of Robert Downey Jr in 2008 "comedy" Tropic Thunder.

Now the Avengers star has spoken out about his controversial choice - but people aren't too impressed over what he had to say ...

Why is blackface so problematic?

For those of you that still don't seem to understand why black/brown face is so offensive, firstly, sort yourselves out. Secondly, we've got the facts here for you.

Yet several famous people have appeared in it over the years.

The most prominent of which being Justin Trudeau, Prime Minister of Canada. Big yikes.

Because no matter how hard they seem to try ...

Celebrities just can't seem to help getting themselves into these totally unnecessary (and racist) situations.

And another celebrity who's in the firing line?

Robert Downey Jr. The actor is a beloved star - and yet in his past, there are some problematic moments.

He's best known for his role in the MCU.

Honestly, where would the Avengers be without Iron Man? (Well, we're about to find out, actually ...)

Downey Jr. starred in a movie that everyone seems to have forgotten about ...

Iron Man himself donned blackface. Yes, you read that right.

The storyline sort of attempts to poke fun at the controversial move.

But if it was aiming for satire, it falls short of the mark. TBH, it's pretty hard to make blackface funny.

But what's even weirder?

The world seemed to collectively brush it under the rug and move on.

Because he was so beloved an actor ...

Robert Downy Jr did an entire move in blackface and everyone just memory holed it because of Iron Man. That’s impressive.
— Openly 6LACK (@Openly 6LACK)1571617843.0

We all seemed to decide to collectively pretend it never happened, and continue to love him regardless.

And the movie's excuse for the racist portrayal?

Well, it seemed a little bit rubbish, to say the least.

The idea that Downey was using blackface to take down blackface?

Well, that just didn't fly with most audience members.

But now Downey Jr. has spoken out of the controversy,

And let's just say people aren't too impressed by what he had to say.

He spoke out about his decision on The Joe Rogen Experience.

"He knew exactly what the vision for this was, he executed it, it was impossible to not have it be an offensive nightmare of a movie."

"You know I think Sean Penn had passed on it or something."

"Then I started thinking, ‘This is a terrible idea, wait a minute.’ Then I thought, ‘Well hold on dude, get real here, where is your heart? My heart is … I get to be black for a summer in my mind, so there’s something in it for me." Uhm, wtf?

His justification is truly bizarre.

"The other thing is, I get to hold up to nature the insane self-involved hypocrisy of artists and what they think they’re allowed to do on occasion, just my opinion."

"I can’t disagree with [the other 10 percent], but I know where my heart lies."

"I think that it’s never an excuse to do something that’s out of place and out of its time."

"But to me, it blasted the cap on it. I think having a moral psychology is job one."

"Sometimes, you just gotta go, ‘Yeah I effed up.’"

"In my defense, ‘Tropic Thunder’ is about how wrong [blackface] is, so I take exception."

What's even weirder about his performance?

Seems like this man can basically get away with anything!

Want to see a less controversial side to the star? Scroll on to watch some truly heartwarming Downey Jr. footage.