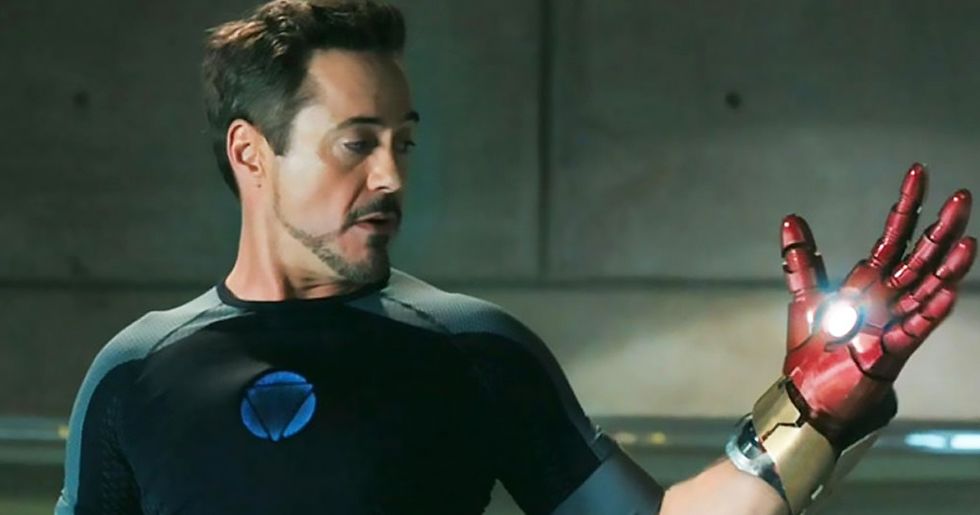 Humanity has always needed a source of hope; a central figure to rally around and keep us going, even when things are at their worst. But it's been so long since we've been able to come to a conclusion on who that person was. Maybe that's why we love Marvel movies so much. They're stories about those who provide us with hope. We like to believe some people are good and will fight for justice no matter the cost. It inspires us to fight in our own lives, as well.

The only problem is, of course, that the Avengers aren't real. But maybe now they're a little closer than they were? Robert Downey Jr., who played Tony Stark for 11 years in the Marvel Cinematic Universe, has announced he's building a company to produce Iron Man-style technology.

His goal? To save the world (for real).

Do you know any of those real-life killjoy types?

All right, we get it dudes (and to be clear, it is always dudes) — fiction is fictional. But guess what? We still like escapist entertainment anyways! What happened in your lives to make you so angry when other people have fun?

Those guys are the worst, and we must guard against their cynicism.

Every time you get someone harshing your vibe on a movie or TV show you love, you have to cut ties with them immediately. I'm sorry, but if you're going to continue to enjoy escapist entertainment, that's just the way it's got to be.

And the area of joy most vulnerable to these types? Superheroes.

This is the thing everyone who loves the Marvel and DC universes has had to reckon with. If we're being honest with ourselves, we have to acknowledge that superheroes do not make sense in the real world.

Every superhero's mission is fruitless.

These guys are putting on masks and capes to do... what exactly? Save the world? What does that mean in 2019? Are they going to start a farm and end world hunger? That'd make for one boring CW TV show.

Batman will never punch away crime.

And no matter how much Thor swings his hammer...

And boy oh boy does that man love to swing his hammer. It's kind of his entire identity. Thor really carries his self-worth in his ability to swing that hammer. (Granted, legend does state that only the worthy can wield the hammer, but it's still not super healthy, emotionally.)

This poor Asgardians dude will be swinging that mythical hammer at Frost Giants and Dark Elves until the day he dies. You think he's going to feel like he accomplished something on his deathbed? The answer is no because he will undoubtedly have been killed by a Frost Giant or Dark Elf.

Billionaire inventor Tony Stark, better known to the Marvel world as Iron Man, has never really concerned himself with the petty quibbles of bank robbers and mad scientists. He's got bigger fish to fry.

Tony Stark has always had his eye on the big picture.

His brilliant mind is focused on much bigger problems — the existential challenges — like cosmic threats to Earth's security, advancing mankind through technology without losing its soul, and hiding his alcoholism from Gwyneth Paltrow.

(Sometimes to his detriment.)

Tony Stark was so convinced there were all-powerful extra-terrestrials threat Earth that he built Ultron, which was... an all-powerful regular-terrestrial threat to Earth. You win some, you lose some.

A real-life Iron Man really could save the world.

Taking a mind as incredible (and, let's be honest, pocketbook as fat) as Tony Stark's and turning it towards our biggest problems? That could make a difference.

And that's exactly what Robert Downey Jr. is trying to do.

While I'm not certain his mind is as incredible, I've seen the box office totals for Avengers: Endgame and, knowing that Downey Jr. got a percentage on the back-end, he might actually be richer than his on-screen counter-part.

... and there, he announced what he's calling The Footprint Initiative.

Coming to us by way of Variety, Robert Downey Jr. spoke about what he was using some of that Avengers skrilla would be spent on: a "new organization that is committed to using advanced technologies for the good of the environment."

How lucky is that? Let me tell you, this "Wealthy actor decides to act like the superhero he portrays on-screen" story could have gone much worse. Robert Pattinson could have punched a clown.

The Footprint Initiative is set to kick-off in April 2020.

Wow, April 2020 is going to see the launch of both this initiative to literally save the planet and the super awesome-looking video game Cyberpunk 2077. Gonna be a huge month. Just huge.

And it could have a huge impact.

The issue Robert Downey Jr.'s chosen to focus on? The environment. “Between robotics and nanotechnology," Downey Jr. said at Re:Mars, "we could clean up the planet significantly, if not totally, in 10 years."

Thank god we've got Robert Downey Jr. on this.

I'm doing my best not to slobber all over the guy, but I really do feel good about having Robert Downey Jr. be the one to take on a project this huge. Between his personal struggles, his determination to get back on top, and the way he's treated the rest of the Marvel cast, Robert Downey Jr. seems like the kind of guy who works hard, overcomes obstacles, and still finds ways to be kind to the people working with him.

And like Tony, Robert Downey Jr. is pretty self-aware about his role in the environmental crisis.

Between all the jet-setting he does, getting to movie premieres around the world, Robert Downey Jr. has definitely played his part in the climate problem. “I’m a one-man carbon footprint nightmare colossus," he said at Re:Mars, probably sheepishly.

No, not that team.

A team of experts.

If you go to The Footprint Coalition's website, you can... sign up for its email newsletter. And that's it. As disappointing as that is, it's even more disappointing when you think about how old a technology email is. My god, you want to be cutting-edge, Robert Downey Jr.? Deliver your newsletter by Iron Man.

So how might all this tech work? Will nanobots clean up our forests?

Can we drive on out to the forest, pour out a sackful of nanobots — indistinguishable from chia seeds — and let them go pick up all the trash left behind over the years?

If we had advanced robotics with pass-through filters ready to be deployed, perhaps we could clean our water, making it drinkable for the thirsty, but also maybe a little less warm so our icecaps stop melting? (Let me dream here.)

Maybe the "Iron Man cleans our oceans" plan is a little far-fetched, but can't we at least send some drones after polluters? Who knows if it'll actually change the world, but it would definitely make me feel better.

But do we know anything for sure about The Footprint Collective?

Right now, of course, The Footprint Collective is just talk from a Hollywood actor. Who knows how this project's goals could shift as more experts, venture capitalists, and other interested parties come in.

One thing we do know is that Robert Downey Jr. has a ton of Avengers money.

Since he's got that Avengers back-end point, it's not unfair to suspect that Robert Downey Jr. is capable of buying and selling a small country. If something is going to happen, it will be because of that enormous fortune.

So maybe it's not the brilliant Tony Stark who can really save the world...

Although it's lovely to think about a single smart, sardonic scientist saving the world through innovation, we've got plenty of those. And they're just toiling away crafting computer algorithms and writing research reports.

... or even his mechanized, highly-armored alter ego Iron Man.

It is maybe a little less lovely to think about a single smart, sardonic war machine saving the world through blowing his enemies to hell, but we've also got a bunch of those, too.

Maybe the real power comes from those with money.

Changing the world ultimately boils down to having enough money to change the world. That means that, in the world of the Marvel Universe, the most powerful character isn't the Hulk or Thanos, but... the Kingpin. See, this is why we have to work hard to protect escapist entertainment from the killjoys — the way the real world works is a bummer.