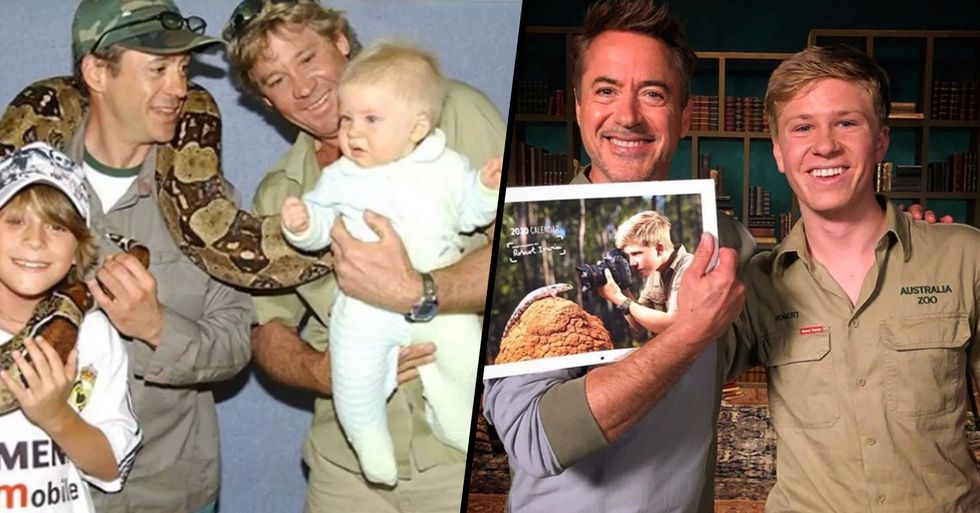 The Irwin family has been making headlines a lot in the last few months, but always for the best reasons.

Whether that's celebrating the engagement of Bindi Irwin, commemorating their late father, Steve Irwin, or discussing their hard work in conservation, the Irwin family is very much loved globally.

Robert Irwin took to Instagram recently to share the best reunion selfie with the one and only Robert Downey Jr after sixteen years.

The Irwins have become one of the most-loved families in the world.

Steve Irwin, or the Crocodile Hunter, as many of us knew and loved him as, was an Australian zookeeper and TV personality who warmed the hearts of millions of people all over the world. And his family have grown to be just as loved, as decades later they have continued working to help protect and preserve native Australian wildlife and bushland.

And she has done a remarkable job.

The surviving Irwins found a way to channel their pain into a perpetual memorial for their husband and father, and have continued his legacy to this very day.

They continue to work towards what Steve believed in...

As a family, the 3 of them continue his work at Australia Zoo and have all devoted their lives to animal conservation and bringing awareness to the causes that were close to Steve’s heart.

Bindi and Robert truly are a credit to Steve's memory.

And they continue to raise awareness for all things conservation with their own TV show, Crikey! It's The Irwins.

But Robert, in particular, is truly a chip off the old block.

The youngest of the Irwin clan, Robert, sixteen, has grown to become Steve's very own doppelganger.

Robert was only 2-years-old when Steve passed away.

Yet, despite spending the majority of his life without his father around, Robert has gone on to, not only become the spitting image of Steve but to also mirror his charisma and passion for wildlife and nature.

His likeliness to his dad is simply uncanny.

Robert appeared on The Jimmy Fallon Show last year, where his body language and overall attitude was a mirror image of Steve.

The internet exploded when Robert shared a side-by-side comparison photo of him feeding Murray the crocodile just as his Dad had done, only fifteen-years-later.

Robert has become a concrete part of Australia Zoo...

And regularly shares photos of his adventures on his Instagram account, which has now surpassed 1.8 million followers.

The teenager is also a wildlife photographer...

And, after graduating high school early, he spends his days out in the bush and embarking on adventures with various different animals all over the world - Just as his dad would have wanted.

But as any Australian can relate, the Irwins have been having a tough time recently...

Australia is currently undergoing the biggest bushfire crisis in history, and the country has been suffering immensely for the last 4 months.

But in typical Irwin fashion...

Robert and his family have worked hard at saving and preserving Australia's wildlife, with them already rescuing a total of 90,000 animals.

They are powering on through the hardships...

And Robert posted the best reunion on his Instagram yesterday.

That the one and only Robert Downey Jr goes way back with the Irwin family, and he met the late Steve several times when visiting Australia.

Robert first shared this snap with the Hollywood star...

In which the pair are stood, arm-in-arm, smiling and posing with a signed photograph.

He then shared this adorable snap...

It shows a baby Robert being held by his father along with Downey Jr, his son, and a huge python.

Perhaps the best 10-year challenge yet?

"The first time I met @robertdowneyjr was when I was just a few months old when he and his family visited @australiazoo - it was awesome getting to catch up again to chat all things #Dolittle," Robert wrote as a caption.

The throwback spurred floods of admiration...

It has racked up more than 320,000 likes on Instagram, with fans commenting, "Omg I love you both so much! You are great people and influencers," and "2 legends in one pic."

So keep scrolling to learn the extent of what the Irwin family has done for the bushfire relief efforts so far...