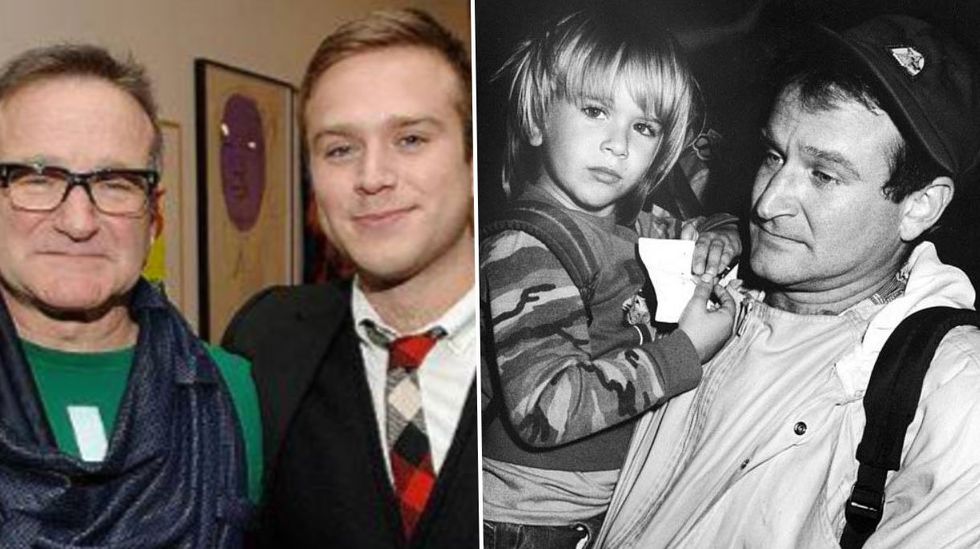 The couple has since revealed that they decided to pay homage to Zak's late father by taking one of Robin's names for the newborn. Anyone who has lost a close loved one will be able to appreciate the profound gesture in passing on a name.

Since Robin's untimely death in 2014, his son, Zak, has been very open about his mourning process.

As much as the world has missed Robin Williams since his suicide in 2014, the pain of his family is inconceivable. Speaking to People shortly after Robin's death, Zak said, "Often I see something or if I’m watching a film, I think, ‘Oh, man, he would have appreciated this’ or ‘He would have gotten a laugh out of this.'"

Robin Williams was passionate about philanthropy and this charitable ideology is something that he evidently passed on to his children. One of the ways that Zak dealt with the death of his father was by volunteering at San Quentin State Prison in California. Zak went to the prison every week and taught inmates financial literacy.

Healing is a process.

Speaking a year after Robin's death, again to People, Zak explained: "As I go through the process of healing, working with inmates and focusing on the Financial Literacy Initiative and criminal justice reform has been healing for me."

Carrying on Robin's message of humility.

Robin Williams believed in giving people a chance. This is something that his son, Zak, has clearly taken on board. Going into the prison system and teaching inmates practical maths so that they can budget better, as well as educating them on investment strategies, is a noble cause. Education is key to self-improvement and, by helping inmates learn how to manage money and occur it, Zak is offering them a powerful lifeline. Zak's program offers inmates a chance to make a new life for themselves away from crime once they leave prison.

Zak has found a partner that his dad would be proud of.

Because they're a couple who values their personal privacy, it is uncertain when Zak met his soon-to-be-wife, Olivia. Whether or not Robin Williams got the chance to meet Zak's love remains private. What we do know for sure, though, is that Robin would have certainly approved. Like Zak, Olivia appears to be passionate about putting positive energy out into the world.

Zak has found a real gem in Olivia. The new mom is also the CEO and founder of a tech startup called VINA; their whole bag is supporting female friendships. On the company's website, Olivia explains: "I created Hey! VINA on the simple premise that it only takes one friend to change our entire lives, and that nothing makes us feel more confident, secure, happy, and free than a supportive group of friends! When women have the tools to connect, support, and empower each other, we can truly change the world for the better... together."

Hey! Vina is an app that brings people together.

We all know how difficult it can be to make friends as adults and Vina hopes to make that easier for everyone. Speaking at a health conference in LA, June explains that, "loneliness is the number one health epidemic in the world." Following his father's suicide in 2014, Zak has been vocal about mental health and it's clear that his fiancee is also passionate about making the world a more connected and happier place.

Having a partner that's open about mental health is good for Zak.

We're happy that Zak has found someone that is open and vocal about mental health. Olivia June's Instagram is littered with supportive and encouraging messages about destigmatizing the conversation around mental health. Anyone who has lost a friend or family member to suicide will know that surrounding yourself with people that you can talk to is crucial to get through the mourning process.

Following the suicide of Robin Williams, there was a dispute over his estate between his children and the actor's third wife, Susan Schnieder.

Susan Schneider accused Zak, Zelda, and Cody of removing items from her home without permission.

In January 2015, it was reported that Robin's third wife, Susan Schneider, a graphic designer, filed papers accusing the late actor's children of removing property from her home without permission. The Williams children in response accused Schnieder of attempting to change the terms of their trust agreement and that the items that they took were only things that their late father would have wanted them to have.

The Williams brood decided to settle out of court.

The late actor's children were apparently distressed by the public battle.  Their Trustee Attorney, Andrew Bassak, released a statement on their behalf stating: "They are disturbed that this petition has been filed and that we're here because as an intensely private person, Mr. Williams would not have wanted this."

I don't think that there was really any real malice between Robin's children and his widow, but grieving is never easy. Following the settlement, Susan released a statement saying: "While it was painful to have truckloads of his belongings removed from our home—it's the few sentimental items I get to hold onto that means everything to me."

With the birth of the late Robin Williams' first grandchild, the Williams brood has something to celebrate. After a difficult number of years, things are looking up. Nothing quite brings joy and laughter back into the world like a newborn baby (and, of course, not forgetting the sleepless nights and constant worry!).

Family was important to Robin Williams.

Family anchored Robin Williams and kept him sober for twenty years. Before the birth of Zak in 1983, Robin was a heavy drinker and cocaine addict. He got clean before Zak's birth but relapsed again in 2003. On the subject of addiction, he spoke to the Guardian. During the interview, it was suggested that his children got him back on track. "In the end it was a family intervention that put him into residential rehab."

Family is a wonderful thing.

When speaking to Guardian interviewer, Decca Aitkenhead, in 2010, Williams interrupted to ask whether Aitkenhead had children. The reporter told him "yes" and his response was, "Congrats. Good luck. It's a pretty wonderful thing." It's clear that Williams always saw his children as his pride and joy.

Zak will be able to show his son all of his granddad's wonderful movies.

Although, of course, it is horribly sad that Robin won't be around to meet his grandchild, there is a solace to be had in that he will still be able to bring him laughter and joy through the legacy of his movies.

There is no doubt that Zak will ensure that his son knows what a wonderful guy his granddad was.

Speaking publicly about grieving his late-father a year on, Zak stated, on behalf of all three of Robin's children, "we try to focus on the joyful moments and memories."

Choosing to pay tribute to his late father is a sweet thing.

Five years on from Robin Williams' death, Zak has become a father himself. The newborn baby, according to People, came into the world weighing a healthy 8 lbs. and measuring 20½ inches.

Zak and Olivia decided to name their newborn "McLaurin Clement Williams." McLaurin is the late Robin Williams' middle name. On Olivia's Instagram account she confirmed that their son will go by the nickname "Mickey."

Do you that think it's been long enough since "Hey Mickey, you're so fine"?

"Hey Mickey, you're so fine, you blow my mind, hey Mickey" was the anthem of the playground when I was at school, but I've got a feeling that song, and its catchiness, may have ceased. Young Mickey Williams will be free to roam the schoolyard without that classic being chanted over and over. The exciting thing about newborn babies is what they represent. Babies represent the future and the endless possibilities of that. Who knows what will become of baby Mickey Williams? Perhaps he will have inherited his granddad's funny bone as well as his middle name. Watch out future! There may well be a new comedian/actor in town.