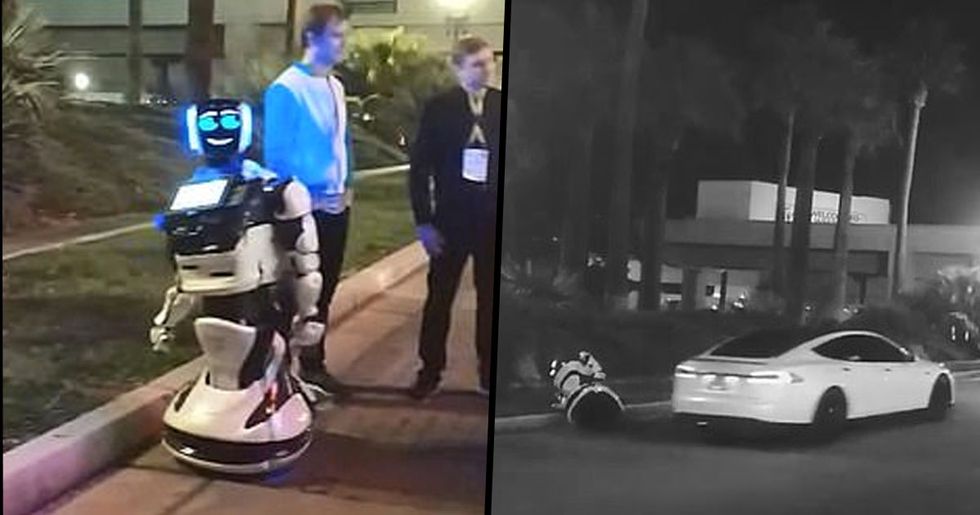 Our world is now a beacon of unique and astounding technology, from smart phones to 3D televisions, things that people only thirty years ago could never imagined seeing. There are now cars that practically drive themselves, houses that do everything for you and yes, there are even robots in this world. But what happens when these great feats of technology interact? Well sometimes they learn to make contact with each other, furthering fears of robotic revolution. Sometimes they don’t recognise each other than anything but objects and sometimes a Tesla pulls a hit and run on a poor, unsuspecting robot. No, we are not making this up.

It was just another day.

It was just another day in Las Vegas.

And the robots were out.

In preparation for CES, a group of Promobots had been brought to Sin City.

And they weren’t cheap.

Although each Promobot may look like they belong in a sci-fi b-movie, they actually cost $2,000 to rent for the day.

They were to be the stars of the show.

Seeing as CES is a celebration of technology and it’s advancements, it’s no surprise that the Promobots were to take centre stage at the event.

And they had to be ready.

Because of this, a number of the robotic characters were being transported into the venue at around 7pm.

I’m sure each robot was very nervous about the next day’s proceedings. They were the stars after all.

But then tragedy struck.

However, not all the robots would make it to the event.

Sadly one robot was not so lucky.

During the transport, one robot fell out of line.

Something robots should never do.

This proved to be the robot’s final mistake.

Because then something weird happened.

As the robot was left stranded, something happened.

And the robot was the casualty.

Left alone on the road, the robot was then hit by a Tesla Model S.

A robot got hit by a Tesla.

I guess the Tesla was jealous?

I mean, at this point Teslas basically have a mind of their own.

The car was driving itself.

For those of you who don’t know, Teslas can actually drive themselves when they are placed on autonomous mode.

Admittedly the idea of a self-driving car isn’t a comfortable one, but that is the world we live in.

But what happened next?

Well the robot fell on its side and was severely damaged by the fall.

Meaning it could not be put on display.

The robot’s damage made it impossible to showcase it at CES.

I’m sure the robot was very upset to hear that.

And Promobot were not happy either.

Oleg Kivokurtsev, the Development Director, was very upset to learn that one of the robots had been so badly damaged.

Here’s what he said:

"We brought this robot here from Philadelphia to participate at CES. Now it neither cannot participate in the event or be recovered.We will conduct an internal investigation and find out why the robot went to the roadway."

Although the stunt has led to some questions.

Because of the bizarre nature of the story, many people have questioned the event, some even labelling it as a PR stunt.

But I’m not so sure…

I mean, those robots are expensive to make and Teslas are also expensive, that’s a lot of money being thrown away for attention.

But it is bizarre.

However, even I have to admit the story sounds dodgy – a robot getting hit by a car, like, what?

Maybe it is real.

If the event was not a PR stunt, then I’m sure Tesla are shaking in their tyres.

This is not the first time Tesla have been involved in an accident.

It appears that the self-driving cars are prone to hitting objects in the road – such as people.

So it’s another strike.

Seeing as they have already been a topic of discussion, I’m sure Tesla are hoping the whole thing blows over.

The driver was definitely apologetic.

Although the Tesla has been self-driving, it did contain a single passenger.

Who was clearly upset over the event.

The passenger stated that he was very sorry and that he thought the robot was cute.

I guess it is.

Was this a PR stunt? Or is this bizarre story the truth?