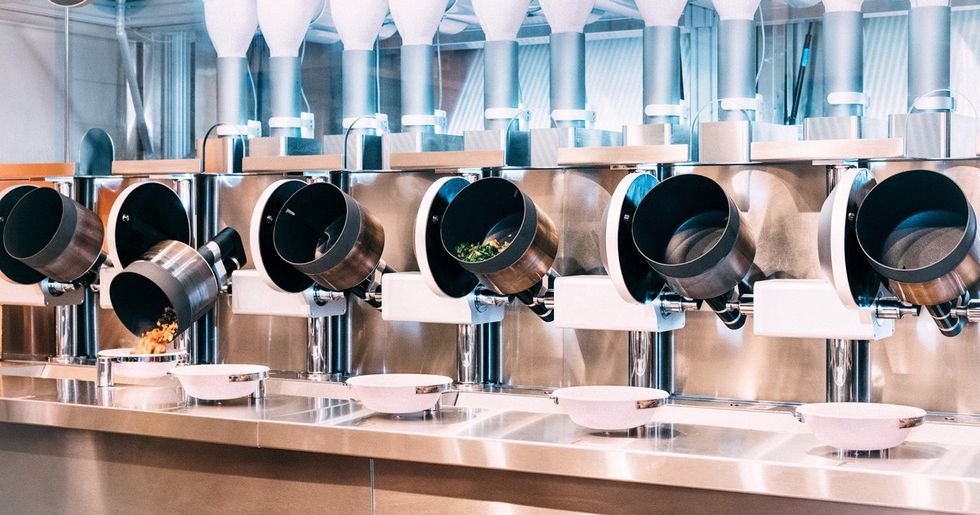 As I child, I imagined the future to behold great possibilities. There would be hover cars, robot dogs, jetpacks and holographs of the Jonas Brothers to keep in my room. That's pretty reasonable, right?

Some of those dreams have come true (except how do I get a JoBro holograph?) but the reality isn't as glamorous as I imagined. Apparently, other millennials had similar goals but made their dreams a reality. Four MIT students have created a futuristic restaurant where the chefs are all robots.

These robots aren't just using microwaves to heat up TV dinners, they are cooking only the freshest meals with the best ingredients because you are in control of what you want in your meal. With food this fresh and technology this advanced, you'd think it was only for the richest folks, but turns out it's actually quite affordable.

These robochefs are catering to your every tastebud and it truly does feel like we are living in the future.

Is this the future you imagined?

What did you think of when you picture what the year 2019 would look like? The possibilities seemed endless when you let your imagination run wild about the future.

I really had all my bets on hover cars.

I thought by the time I was going to get my license I'd have the option of testing with a hover car. It's safe to say that I am a little disappointed.

All we have is hover boards.

They were cool at first but once they started blowing up on people and causing some serious injuries, it seemed like the trend died as soon as it started.

We basically have robots in our pockets, so that's pretty cool.

Don't get me wrong, I'm not entirely disappointed in the future. We've got amazing technology that still blows me away and sometimes freaks me out about how advanced it can be.

But have you ever pictured robots cooking your food?

Maybe that was your first thought when you wondered what the future looked like. Robochefs seem practical and would be very impressive.

These guys are living in the future.

It all started in a fraternity basement.

That usually isn't how an amazing story starts, but in this case, it is. The four students and fellow water polo teammates were studying mechanical engineering and realized they all had a common issue: the combination of studying hard and being on a water polo team lead to intense hunger, like all the time. But, they were broke college students.

These hungry dudes ate out a lot.

They were sick of spending too much money on takeout from local restaurants but still valued a healthy, quality meal. If you've ever been in college, you know it's hard to balance eating healthy on a college budget. Sometimes you have to choose between saving a few bucks or eating a quality meal.

There had to be a better way.

The guys huddled in their basement and discussed how they could create something that would appease their hunger and not break their budget.

"We dreamed of an alternative: a robot that cooked tasty and nutritious meals, served them, and cleaned up after," Michael Farid, one of the founders, explained on the Spyce website.

It was a long process.

"We were all robotics-obsessed engineers, so we quit yapping and built one in our fraternity basement," Farid shared. "Two years and many burns, bruises, and brussels sprouts later, we’re opening our first restaurant and we couldn’t be more excited."

The restaurant is located in downtown Boston and is already making waves, not just in the technology world, but in the culinary world as well.

The robots cook only the best food.

"First, everything has to taste great, so our recipes are inspired by the most delicious spices, flavors, and textures from around the world," their website explains.

Every kind of taste palette will be satisfied.

Do you have dietary restrictions or specific eating habits? Spyce has got you covered. "Each one of our bowls can be customized to your taste and we have vegetarian, pescatarian, gluten-free and vegan options," they proudly explain. As you peruse through their online menu, you see that they aren't messing around when it comes to flavor.

It's not basic at all.

From Latin to Thai, to Indian cuisine, Spyce makes sure that their flavors are diverse and their ingredients are fresh.

Look at all those colors. This is the most beautiful plate I think I've ever seen.

Seriously considering booking a flight to Boston just to taste this.

Renowned chef Daniel Boulud was asked by the Spyce Guys to invest in this business, along with the other $24.8 million in funding that Spyce has received so far – but Boulud had a better idea.

"When Michael and his three classmates emailed me about a robotic kitchen that could elevate fast food, I was impressed," Boulud said on their website. "So, in addition to becoming an investor, I accepted the position of Culinary Director at Spyce."

Chef Boulud oversees all the flavors.

As the Culinary Director, Boulud is responsible for menu direction and training the staff, the actual humans that work there, not the robots. He was previously a Michelin judge, so you know his taste buds are exquisite.

What are the robots actually responsible for?

The robots are responsible for cooking in a stir-fry manner, using a wok to mix and heat all your selected ingredients. They are also on clean-up duty, rinsing and washing every wok after use. "It has seven cooking woks, all heated using induction, a technology invented by Nicola Tesla," Spyce explains on their website. "It is efficient and accurate and uses less energy than other heating methods."

Are the robots stealing our jobs?

It's easy to think that robots are out to abolish all of the human race, starting first with those who are in the work force. But Spyce wants to reassure its customers that they aren't trying to get rid of human employees.

We definitely don't want robots taking over the world.

Spyce is aware that people aren't always super pumped to see robots because it means fewer jobs for people. But they addressed this question on their site: "Our restaurant does have fewer employees than your typical quick service restaurant. The employees that we do have, we pay well. The aim of this venture was to make tasty nutritious food affordable, and we do that by being as efficient as possible."

The robots don't do all the work.

Spyce does employ actual humans, or "garde managers," as Spyce officially calls them. Their other title is "garnish employee" which means they are responsible for putting the final touches on your dish.

They add that final touch to your dish to not only make sure it looks amazing but that it gets all the love and attention it deserves, something only a human can do.

At first, it seems a little crazy.

Can we trust robots to make great quality food and care about our food experience?

Change can be scary.

Trying out the bowls from Spyce in downtown Boston tonight. The food is made by robots, designed by MIT students. B… https://t.co/4d4zVa3Oo8
— Karlsen Brandt (@Karlsen Brandt)1528288167.0

After initial hesitations, people were still pretty excited to try these exotic and fresh dishes.

We've got a happy customer!

Nothing better than a full and satisfied customer.

Go for the experience, stay for the flavor.

Here's one of the 500 customers that Spyce serves everyday, pleased with their delicious food choice.

You can't fake this kind of happiness. Clearly, people are leaving Spyce very satisfied and excited to share with others about their experience.

It's even vlog worthy!

This guy wanted to film his experience to show others what Spyce is like and how he was clearly excited about his food.

We welcome our new robot friends!

Robots are our friends, not our enemies. Unless they try to take over the world, then they are definitely our enemies. But chef robots are friendly and we like them. For now.

With an overall 4 Star standing on Yelp, customers overall seem to be very pleased not only with the experience but with the actual flavor and quality of the food.

You won't find beef at Spyce, and for good reason.

"Beef production isn’t sustainable," they explain on their website. "While we are all about flavor, we understand that our choices have an impact on the world around us."

There's just so many reasons to be excited about Spyce.

Besides the fact that it's affordable (the average price of a bowl is $7.50) the company prides itself on being eco-friendly and environmentally conscious in its food sourcing methods.

So it's delicious and has an ethical food philosophy?

Yes. It is all that and more. They use the phrase "appropriately sourced" to describe their food philosophy: "For our Thai dish for example, our  sweet potatoes and kale are locally grown right here in New England. We source organic where it makes sense, always with a thought towards sustainability and protecting our planet."

Maybe the future is way cooler than I imagined.

If the future involves amazing flavor, supports environmental sustainability and saves me some money, then I am all for it.

It really does keep getting better. If a member of the Smith family loves it, then we all love it.

You'll have to taste it to believe it!

If you ever make it out to Boston, don't be afraid of the robochefs – embrace their expertise and efficiency. Share this article with your fellow foodies to get excited about the future of flavor!