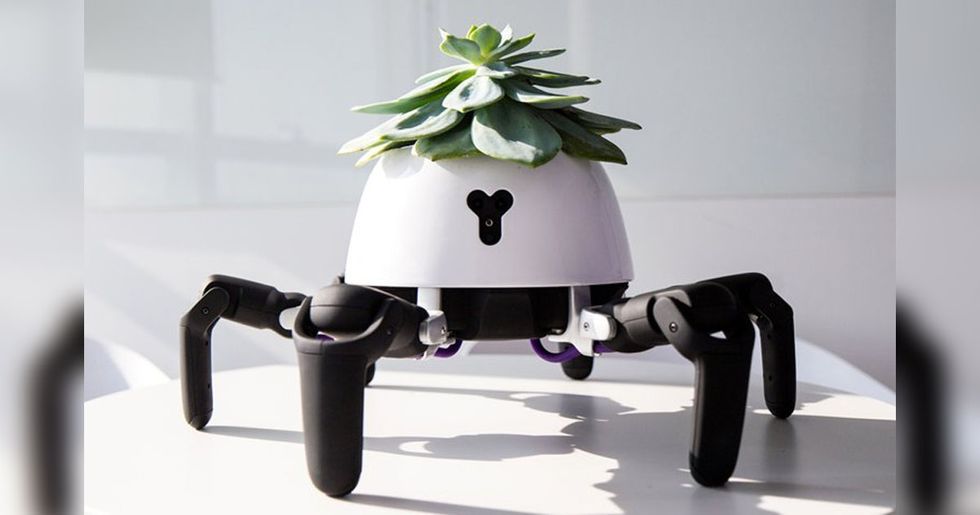 Whether they’re busy firing deadly rockets from behind the clouds, building cars, or even playing football, the robots of tomorrow are marching awkwardly into today.

With the ever-expanding field of robotics seeping into every category of modern living, robots, it seems, are just something that we’re going to have to get used to. Many can be used to perform vital services, otherwise impossible or dangerous for their human counterparts - like fixing deep-sea pipelines, or defusing potential IEDs.

However, some, such as Vincross’ new Hexa Robot, can be used for more domestic labour - like making sure that your succulents get enough sunlight.

Now, with the new Hexa Robot, no belated birthday present from an ex-partner need die in some dingy corner of the room - unless, of course, you want it to.

The robots are coming whether you like it or not. Thanks to innovations in robotics and AI, robots can now learn, map environments and store more memory than ever before.

This increases the functionality of military, commercial and industrial robots ten-fold. But we’ve got some difficult questions ahead of us: what will humans do in this increasingly humanless economy? And when does a robot wield too much power?

The term "robot" was first used by the Czech playwright, Karel Čapek in his Rossum’s Universal Robots, 1920. The word hails from the Czech "robota," meaning servitude.

The first digitally controlled robot was invented in 1954 by a scientist named George Devol.

His creation was immediately set to work in General Motors. God Bless America.

And robots have taken to all walks of life.

Here are some of the frontrunners.

This is the Atlas robot. This robot can run, walk, get up from a prone position and lift half its body weight.

Atlas currently spends most of its time being harassed by its Boston Dynamics team, prompting one comedy genius to mod it with rude phrases.

This is Sophia. She’s programmed for human interaction. She can recognize faces and pick up recurring motifs in human linguistics and conversation. She’s recently become the first robot to obtain citizenship and to address the UN.

Here she is having an existential conversation with a distinctly creepy-looking bald guy.

Its development was in collaboration with Shadow Robotics, Yachtline, DYSEGNO, Sebastian Conran and Stanford University Professor Mark Cutkosky; this robot can cook essentially anything.

Here’s another Boston Dynamics product. This one is a robot substitute for a dog. Spot weighs 160lbs and can map terrain.

ASIMO is widely regarded as the world’s most advanced robot. He can run, walk, grasp objects, turn smoothly and climb stairs. Here he is playing football with Obama.

This one dances by mimicking motion capture dancers.

Not all robots are modelled on humans. This one’s modelled on bees. They can talk to each other using complex algorithms.

Here’s an Italian robot. It’s a humanoid three-foot robot. We hate that it doesn’t have a mouth.

This is of the most famous robots in the world and it's certainly the most expensive. This robot is built for a noble purpose: to explore the terrain of outer space.

But it’s not all fun and games.

Some robots have raised profound moral questions in their conception.

Military robots are a difficult one. Most major nations utilize robots in their military, but killing machines that have their own autonomous agency are particularly scary.

What if one goes rogue? And who’s morally responsible for their "choices"?

The Russian Foundation for Advanced Research Projects has recently built their own robot soldier.

The US military pack mule.

Other than their widespread utilization of remote warfare via drone technology, the US military has built a robotic pack mule, capable of traversing the battlefield.

Sex robots are equally morally dubious. What happens if you literally take the soul out of sex? And how will these new sex robots objectify women in particular?

This technology must be approached with caution, having a sexual partner over which you have no moral responsibility is dangerous.

Back to the lighter side of life.

Let’s talk about the titular robot.

There are no moral complications, no scary quasi-humans, just a very healthy succulents.

It’s called the Hexa. You put your potted plant in it and it chases the sun.

Here’s what inspired the inventor.

He said, “Plants are passive. No matter if they are being cut, burned or pulled from the earth, they hold still and take whatever is happening to them. They have the fewest degrees of freedom among all the creatures in nature."

Well, not any more!

Now your plant can mount a robot companion and never go sun-hungry again.

I personally have never cared for plants. I don’t feel empathy for them, I don’t anthropomorphize them in any way.

Maybe robots like Hexa can help cynics such as myself take better care of plants...

"Hexa can move anywhere—in any direction and around any objects in its path."

But it isn’t particularly cheap.

Robots aren’t cheap - but they’ll only get cheaper with time!

How does it map its environment?

It uses a built-in 720p camera, an infrared sensor, and a distance sensor.

Is this what the future will look like? Will we, over the next few decades, begin to see the natural and artificial world collide?

Here’s a little video of the Hexa.

Will you consider purchasing one?