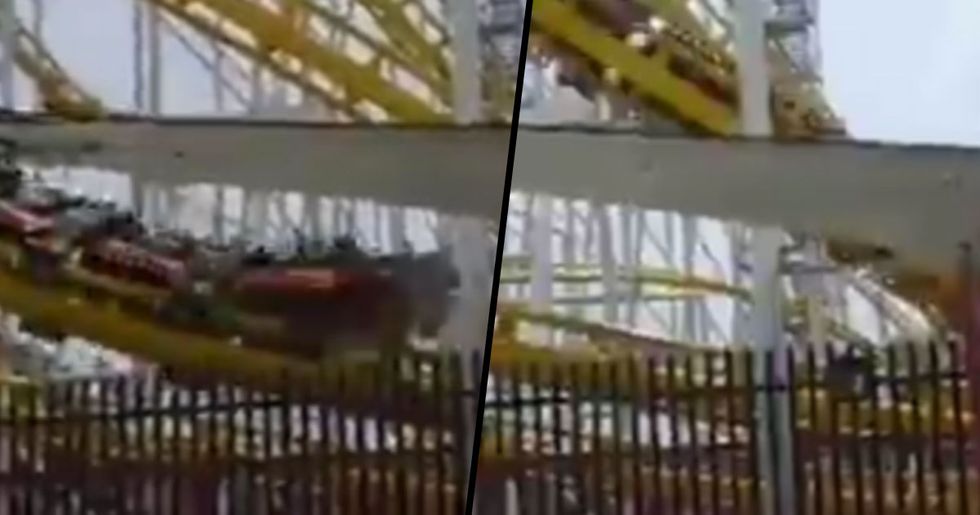 Horrific footage has been emerging from Mexico after a rollercoaster derailed, killing 2 and injuring a further 6.

A video circulating on social media shows the car, which was estimated to be carrying around 8 people, turning nearly upside down, derailing from the track, and smashing into a metal loop on the rollercoaster. The footage shows the severity of the accident, and shocking images of the aftermath have been emerging.

Keep scrolling to hear more about the tragic accident, and to see the harrowing footage first hand.

Rollercoasters are supposed to be an enjoyable experience.

Though they are quite formidable in their exterior, the overall adrenaline rush experienced while riding a rollercoaster has made us continuously brave these rides for years.

Though riding a rollercoaster is usually fun and adrenaline-packed...

They can, undeniably, be completely terrifying at the same.

And, despite most rollercoasters being perfectly safe...

There is still some part of our natural instinct which induces anxiety over climbing into a little carriage and being hurled around a track, all while being suspended hundreds of feet above the ground.

Why do we keep going on them?

There's actually a psychology behind it.

Enjoying roller coasters is linked to sensation-seeking – the tendency to enjoy varied, novel and intense physical experiences such as rock climbing and parachute jumping.

The enjoyment of rollercoasters has been linked to the visceral sensation of fear itself...

Much like the sensation experienced when watching a horror movie. Physical signs of fear such as a pounding heart, faster breathing, and an energy boost all contribute to that adrenaline rush, which ultimately leads to that euphoric feeling you get after riding a rollercoaster.

And rollercoaster accidents are incredibly rare.

As the odds of dying on a roller coaster stand-in at around 1 in 300,000,000. The U.S. Consumer Product Safety Commission stated that there are roughly 2 deaths per year attributed to a roller coaster accident here in the States.

However, this doesn't mean that these accidents are impossible.

Every now and again, rollercoasters do malfunction. And, when they do, they can cause devastating injuries and, in worst-case scenarios, death.

And this week, reports have come in about a horrific rollercoaster malfunction.

The most recent accident has involved a rollercoaster carriage becoming derailed from the track and, remarkably, the devastating incident was captured fully on camera.

This horrifying incident happened in Mexico.

The Quimera rollercoaster at the La Feria Chapultepec Magico theme park derailed while carrying passengers in a 5-car-long carriage.

This rollercoaster isn't one for the faint of heart.

The German-build stands in at 111'-tall, 3,500'-long, and features 3 loops. The coaster also hits top speeds of fifty-three mph.

And one Twitter user captured the moment the rollercoaster derailed.

In the video, which was posted to social media platforms, the rollercoaster is going around the track as usual.

However, the rear carriage suddenly derails.

In the video footage, the rollercoaster can be seen coming through a 360 loop and into one of its gentler bends. However, after the bend, the carriage at the end suddenly derails, and flys off the track.

Witnesses told El Universal that the 2 riders who were killed hit their heads on the steel support and that the coaster dragged the flailing car before it finally detached and plunged to the ground.

The fatalities are yet to be identified...

And all we know so far is that they were both male, one aged eighteen and the other aged twenty-one.

But they were taken to hospital in a "serious condition." The 6 other riders all escaped with minor injuries but were treated for shock in the aftermath.

Emergency workers can be seen tending to victims, who are seen laid out on stretchers among the rubble.

Blood is seen splattered on the walls.

Which is a devastating reminder of the severity of the accident.

Mexican authorities have closed the amusement park to carry out their investigation.

Preliminary reports indicate a mechanical failure; the accident is being treated as a case of negligent homicide, according to CBS News.

The full video can be watched below.

Click here to see the video, though be warned, it contains distressing content. R.I.P to those who lost their lives in this tragic accident.