Rome Spent $57,000 on the Most Pathetic Excuse for a Christmas Tree We've Ever Seen | 22 Words 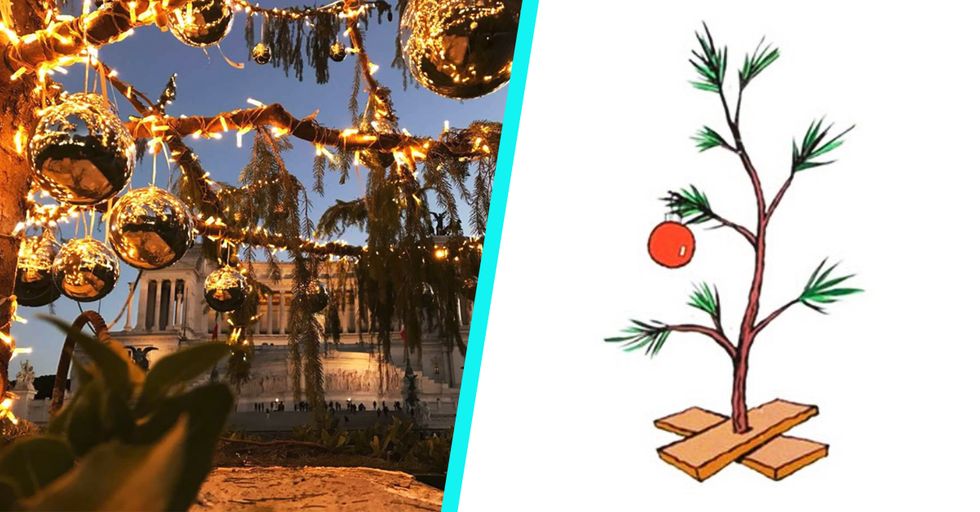 Rome Spent $57,000 on the Most Pathetic Excuse for a Christmas Tree We've Ever Seen

It's the most wonderful time of the year...unless you're in Rome.

Christmas decorations are a wonderful distraction from the awful awfulness that has been the year 2017. The bright lights, shiny tinsel, and beautiful trees are almost (almost) enough to distract you from the things that typically make you want to curl up into a ball and cry all day.

But in one particular plaza in Rome, the Christmas spirit is not alive and well. In fact, it's pretty dead.

There's really only one rule when it comes to having Christmas trees in public spaces: They've gotta be impressive.

A public Christmas tree needs big and bold. Something that will cause people to stop in their tracks and be overwhelmed with awe at its sheer majesty. Take the tree at Rockefeller Center, for instance. Every year, the tree is seriously amazing. (And after Christmas, the tree is milled into lumber to build Habitat for Humanity homes — it's beautiful and useful!)

Apparently, Rome didn't get that memo. This is the tree they got to stand in one of the city's busiest plazas:

Oooooh boy. That's a pretty rough looking tree. It's more bauble than branch! Apparently, it cost the town approximately $57,000USD to transport the tree to the plaza. Obviously, it was totally worth it.

But hey, even Rockefeller trees weren't always imposing, bountiful-branched beauties. Here's one from the 1940s:

See? It's a little sparse, too. Maybe it's just as bad as the one in Italy. Let's take another look...

Woof. No, yeah, this one is definitely way, way worse. The citizens of Rome have started calling the poor tree "Spelacchio," which roughly translates to "Mangy." Yeah. That tracks.

The response to the tree has been pretty unanimous:

It's, uh, not a great tree. Actually, officials have said that the tree is already dead. Well before Christmas! But the tree's rough appearance has some people feeling something of a kinship with the forlorn evergreen...

The comparison to Charlie Brown's Christmas tree may be a tad on the nose, but it's too perfect to pass up:

It's true. Poor Spelacchio maybe just needs a little love. And a lot of water. And maybe some superglue.

This Twitter user tried to find a silver lining by pointing out that Spelacchio looks better at night.

But here's the thing. Spelacchio is the perfect tree for the year we've been having.

After all we've gone through in 2017, we're all struggling to look and feel our best. Spelacchio gets us. He knows.

Shout out to Spelacchio, the official mascot of 2017.

At least we can say this about the tree: He tried. That's gotta count for something, right?