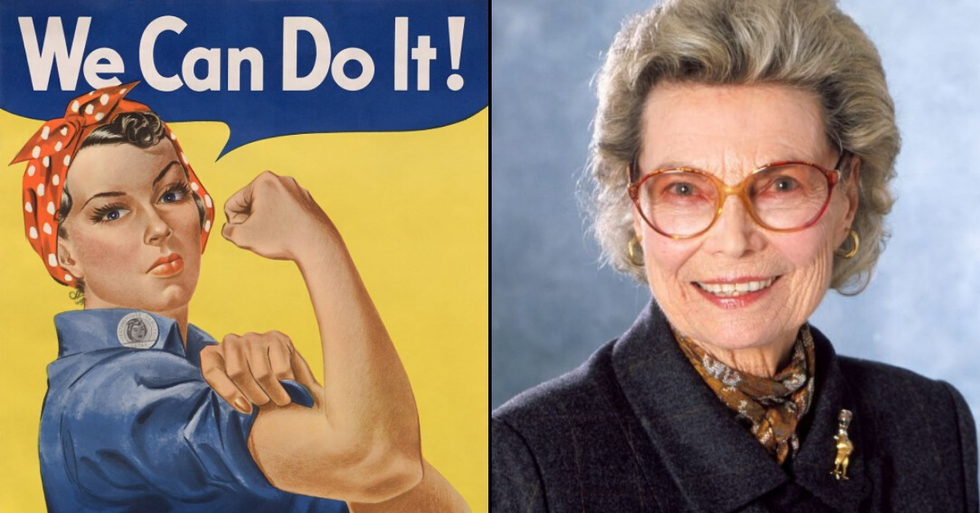 The woman behind the iconic, hard-working woman in overalls image has sadly passed away this week.

Rosalind P. Walter became the image of the 20th century's feminist movement, and many are coming together to remember her impact on women's equal rights.

Keep scrolling for the full story, and to read about the incredible life she led...

Rosalind P. Walter was the face of one of the most significant feminist movements.

Brooklyn-born Rosalind inspired the designs for a series of posters that were used to recruit women workers during World War Two.

To well-off and educated parents, Carleton and Winthrop (Bushnell) Palmer.

Though she was born in Brooklyn, Rosalind spent the majority of her childhood in Connecticut...

Where she attended the Ethel Walker School in Simsbury, one of the first college-preparatory boarding schools for upper-class women.

But, by the time Rosalind was ready to embark upon her journey to college...

World War 2 had broken out.

The 1941 attack on Pearl Harbor then spurred America to declare war on Japan, Germany, and Italy...

Thus meaning that women were required to take over the work that was typically reserved for men.

Stereotypes of women's capabilities in a "male" workplace had been circulating amongst employers for years...

But, when the majority of America's men were sent out to fight along the front lines, little choice was left but to recruit the young women left behind.

During the war, millions of women of all classes and backgrounds were employed to do "male" jobs.

This included work in agriculture, mechanics, and the armed forces.

And Rosalind was one of these women.

Despite coming from a privileged background, Rosalind decided to give up on her college ambition and join the millions of other women in the hard work to arm American troops with munitions, warships, and aircraft.

At the age of just nineteen...

Rosalind worked night shifts driving rivets into the metal bodies of Corsair fighter planes at a plant in Connecticut.

Before the war, this job had been exclusive to men only...

So the news of a nineteen-year-old, upper-class woman working in such a trade spread quickly.

A newspaper column was written about Rosalind's work...

And thus inspired a morale-boosting song that encouraged women to join the workforce.

Rosie the Riveter was born.

Built around Rosalind's story, the archetype of the muscular, hard-working woman in overalls and bandanna-tied hair was presented to the world.

Several posters were designed around the song...

But the "We Can Do It!" poster, designed by J. Howard Miller, was by far the most iconic.

The poster that was built around Rosalind remains as one of the most recognizable images from that era...

And still stands as a reminder today of the inspiration behind equal working rights for women.

And as more women were gradually beginning to work in male-dominated environments, the poster began to stand as a more feminist symbol.

Today, the poster has become a poignant symbol of feminism...

And, to this day, continues to inspire women and young girls all over the world.

But what about the real Rosie?

Despite the image of an overall-clad Rosie being known by pretty much every woman in the world, the real Rosalind has remained a little more low-key.

And believed deeply in the importance of educating the masses through broadcast media.

She spent the majority of her life working within broadcast television...

And was the largest individual supporter of WNET, the primary Public Broadcasting Service, and helped to finance 67 shows or series from 1978. She also served as a board member for several New York organizations, including the American Museum of Natural History and The Paley Center for Media.

So, it comes with great sadness to reveal that Rosalind has sadly passed away.

This week, aged ninety-five, Rosalind peacefully passed away at her home in Long Island.

Though she has died, her legacy will live on.

For more on feminist issues, keep scrolling to see how some feminists had the perfect response to online haters...