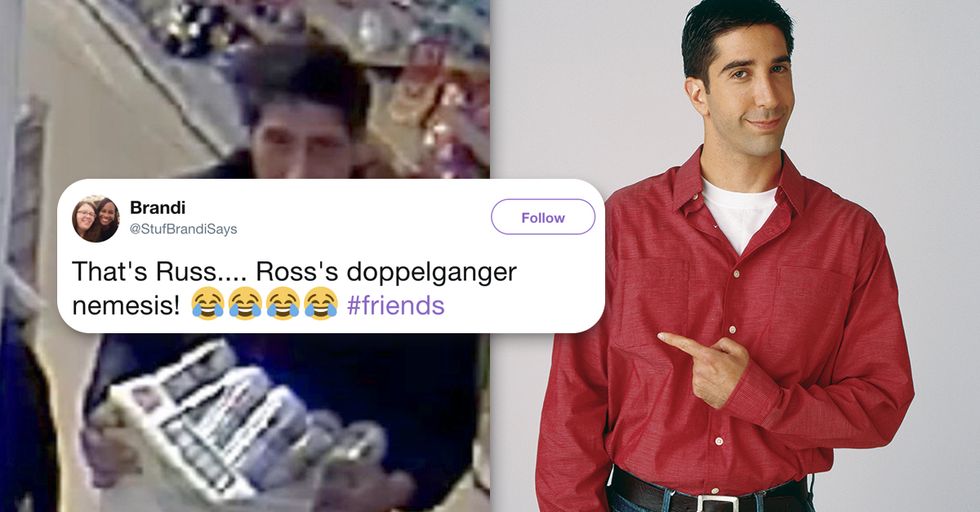 Yes, you read that right. Ross Geller from Friends was caught up in a crime. The situation came about when the Blackpool police department, in England, posted on their Facebook page about a recent restaurant robbery. A suspect was caught on the security cameras, shoplifting beer from a local restaurant. After posting the suspect's picture, responses began flooding in. Immediately, people pointed out the suspect's startling likeness to Ross Geller, a character from the hit TV show Friends. Before long, the mystery of Ross and the beer thief became an international talking point over the Internet. The Blackpool police even got in on the joke with their Facebook posts.

When you see the pictures for yourself, you'll realize that the resemblance is uncanny. And in all the craziness, David Schwimmer, who played Ross on the show has reacted to the news with a hilarious response. Good one, Ross!

The One Where Ross Became a Thief

That’s right: a suspect was caught on camera robbing a case of beer from a restaurant in Blackpool, UK. And the robber looked exactly like Ross Geller from Friends (aka David Schwimmer).

The original post read: "Do you recognize this man? We want to speak to him in relation to a theft at a Blackpool restaurant on the 20th of September."

And the culprit was quickly identified as Ross Geller.

Really, though, don’t they look alike?

And yes, people were cracking a ton of Friends jokes. Golden opportunities like this don’t happen often!

Being mistaken for a criminal... it is not that common, it doesn’t happen to every guy and it IS a big deal!!! -Louise Parker

We know that they know.

Blackpool Police think they can mess with us?  They don't know that we know they know we know it's Ross.  The messers become the messies! -Jayna Klinkebiel

One popular theory was that it wasn’t Ross at all.

It was Russ all along!

There’s a lot of Ross to go around.

Was it Ross? Was it Russ? Is there a third doppelgänger out there in the world?

No one told him life was going to be this way.

Oh, Ross. How the mighty have fallen.

Honestly, the whole song works for this.

I don’t think it’s been this guy’s day, his week, his month, or even his year…  - Nick Croston

The suspect was confirmed to be dangerous.

Please approach with caution. He is known to have studied Karate and we believe he has mastered Unagi, the state of total awareness. - Aaron Milburn

Some couldn’t help but remark on the thief’s technique.

Apparently, the police had him cornered then, he performed a pivot maneuver and escaped. - Jay Murdoch

It can't be good for his rage. He could send the police 72 long stemmed red roses so they can make potpourri. -Lisa Townsley

But the incident needed to be taken seriously.

A good support system is important.

Especially when the rain starts to fall.

I was going to read the report for this but it was 18 pages…FRONT AND BACK! It rambled on for so long that I fell asleep. - Billy Hewitt

Some people had sympathy for Ross.

How did he keep track of his stolen goods?

I wonder if he counted the cans Mississippilessly - Claire Louise

I wonder why he went for the alcohol.

Or maybe he grabbed those beers for another reason…

Needed them to wash down Rachel’s Enligsh trifle. - Siobhan Abbey

Now, why would Ross Geller be there in the first place?

Shouldn't he be at work...or is he on a break? - Joe Richardson

People began wondering what David Schwimmer himself had to say about this.

We all want to know if he’s okay, right?

And could he account for his whereabouts on September 20th?

We have to rule out as many suspects as possible, after all.

So much for that theory, though!

Eventually, Blackpool Police themselves confirmed that Schwimmer was in America at the time of the robbery.

And they had some fun with their statement:

Thank you to everyone for your speedy responses. We have investigated this matter thoroughly and have confirmed that David Schwimmer was in America on this date. We’re so sorry it has to be this way. - Blackpool Police

There you have it, folks! It definitely wasn’t him.

On Blackpool PD’s Facebook page, they shared the following comment: “Thanks for being there for us David Schwimmer ? We appreciate your support! ?"

All this attention is bad news for the robber.

Bloody brilliant. I reckon the real criminal is now in permanent hiding from pretty much everyone everywhere -Julie Harvey

As a result of all the internet’s sharing, Blackpool Police have identified their suspect!

Only time will tell if our culprit was the dreaded arch-nemesis, Russ.