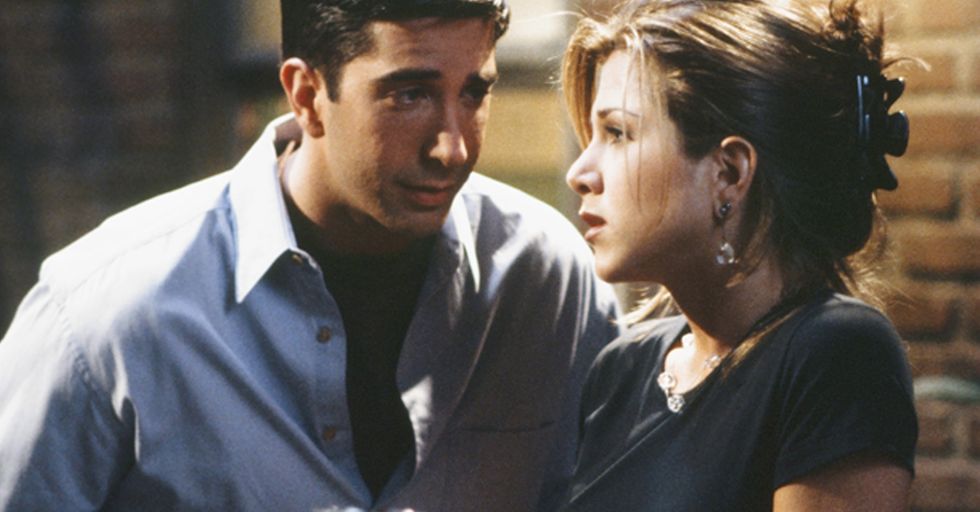 Everyone Thinks Ross from 'Friends' is Super Relatable for This Reason

Most of the time, Ross Geller is the one Friend we all roll our eyes at. He's goofy, and somehow unlucky in love while still scoring way more dates than he should. Today, however, the internet considers Ross to be the only mood that matters. Why is that, you ask?

Well, during the show's run, Ross happened to have one extremely relatable line of dialogue. And this was during an episode set just after New Years'. Yes, this episode aired years ago, but Ross's line is as timeless as it is funny. Whether it's January of 1999 (the episode's original air date) or January of 2019, we all feel like Ross sometimes. Here's the moment that has Twitter in the Ross Geller spirit!

The One With All The Resolutions

So, back in 1999, Ross Geller (and the rest of his friends) made a few New Years' resolutions. Some of those were more regrettable than others.

Ross resolved to be happy in 1999, and to do something new every day. Sounds fair, right?

Then Ross gets a date.

And when you've got a date coming up and a resolution to try new things, the preparation gets interesting.

Hey, how else would you impress a date besides a pair of skinny (and hot) leather pants?

When we say hot, we're referring to temperature.

Because while on his date, Ross realizes that the pants are highly uncomfortable and overheating his legs (it's solid leather, Ross, duh) and retreats to the bathroom.

During all of this, Chandler was pretty eager to mock Ross for getting the pants...but he'd made a bet that he wouldn't mock his friends for a week. So the leather pants stayed!

And then, the real problem:

Once Ross cools off in the bathroom (by taking his pants off), he attempts to put the pants back on. There's just one issue: he can't!

Ross made a desperate phone call.

Is Joey really the one you should call in emergencies? Well, Ross did, and it didn't end well.

Joey does have a bunch of recommendations.

Which means that Ross ends up splattering various cosmetics over his legs, trying to make it possible to slide the leather pants back on.

Alas, it was to no avail.

And Ross was forced to return, pantsless, to his date. Needless to say, she wasn't impressed.

Ross does a walk of shame back to the apartment, where he then despairs over the beginning of his 'great' year.

And says this iconic line:

Ross's declaration of feeling like a loser definitely resonated with the Internet.

And, like Ross Gellar, we shall overcome such feelings. Although, maybe forego the leather pants entirely.

Seriously, few people are as unlucky in love as Ross.

And yet, he ends up happy with Rachel. Now that's progress!

And so, for one day only, Ross Gellar became the most relatable guy on the Internet.

We all know that pain. It's one thing to talk, and another entirely to follow through.

Winter's flu season is the worst.

Nothing like getting sick on January 2nd to make you feel not so great about the new year!

Every year, this is the mood.

As long as we shake it off on January 3rd, right?

Other people just came in with some serious Ross-burns.

Depending on your settings, you might have noticed Twitter marking Ross (in all his pants-less glory) as potentially sensitive material. Well, now we know why!

And some just felt Ross's words on a spiritual level.

@benoobrown I was planning to wash and vacuum my car but I got stuck in the petrol station and the car wash prices have risen
— Jay (@Jay)1546450027.0

Even the little things can really mess with your day.

Yep, that's pretty much peak cringe. As long as you're doing better than that, we'll call it a success.

Not to mention, Ross had made plenty of goof-ups.

Who can forget Ross's desperate yells of "PIVOT?"

He also thought he knew Unagi.

Ross was pretty sure he'd mastered Unagi, a state of total awareness. But unagi is actually a Japanese freshwater eel. So, way to go, Ross!

When Mona dumped Ross, it was honestly way past due.

Ross (to Joey): "I didn't tell her I got Rachel pregnant." "I gave her a key to my apartment and then had the locks changed." "Then I lied to her about Rachel moving in with me." "In a way, I judge her for not breaking up with me sooner."

I wonder who's more done with Ross– Rachel, or the people watching the show?

And everyone was aware of his failings.

1 out of 365 is pretty bad, actually. But at least there was one day when Ross was self-aware!

All in all, people were happy to spread Ross's January 2nd message.

Apparently this is the day, without fail every year, to spread the Ross around.

If you never retweet anything else remotely related to Friends, you must at least retweet this.

@benoobrown @christinekabob i’m rewatching from the beginning (again) and landed on this episode this morning 😳
— Jess (@Jess)1546460201.0

On January 2nd, you must always somehow land on The One With All The Resolutions.

So for today, feel your Ross feels.

And then tomorrow, let the "loser" part go, as much as you can. It's okay to not meet every resolution– just do what you can! Find this story as funny (and relatable) as everyone else? Share it with your friends!