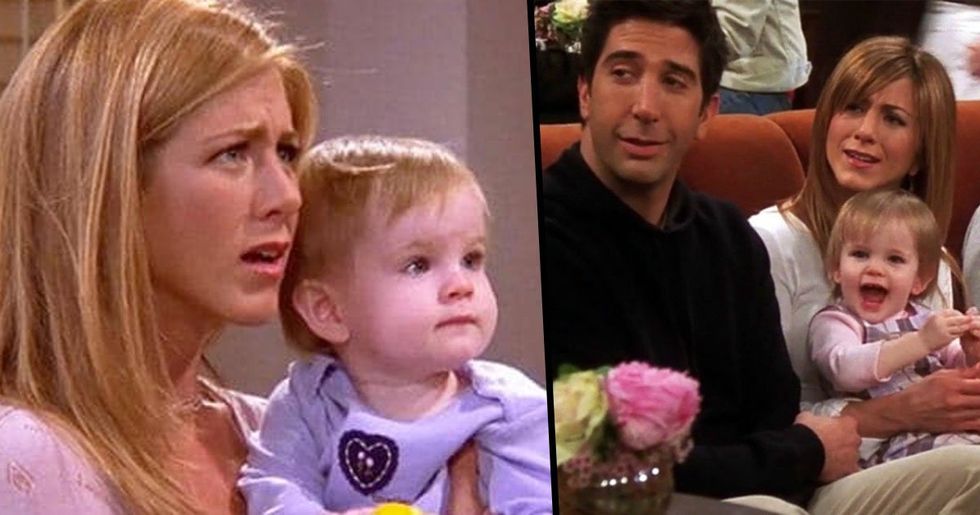 It's been a while since new episodes of Friends graced our TV screens. Of course, that hasn't stopped us from re-binging the show on Netflix! Still, Friends wrapped up its 10-year run in 2004. So when you think about it, we've been Friends-less for well over a decade!

Then, one Friends fan on Twitter made a startling realization: that Ross and Rachel's daughter would be coming up to her 18th birthday in real life. And if that doesn't make you feel old, then what will? Here's the full story, straight from its Twitter thread--and some hilarious reactions to the discovery. Because the fan reactions here are relatable as heck!

Ross and Rachel were the defining relationship of 'Friends.'

For a pair who couldn't get their act together as a couple until the show's finale, their lovelorn inconsistency was one of the most consistent things about Friends!

And way back when, baby Emma was born.

Ross and Rachel's on-again, off-again relationship manifested in a big way when Rachel became pregnant at the end of season 7.

It was then revealed in season 8.

On the day of Monica and Chandler's wedding, no less! At the time, nobody but Rachel herself was aware of the baby's father.

Emma Geller-Green is born at the end of the season.

Which means she's pretty much a baby for the remainder of the series--seasons 9 and 10.

At one point, the gang sets the timeline straight.

Some time after Emma's birth, Ross decides to make a video for her 18th birthday. And one line from Chandler has sent Friends fans reeling!

That's right: if Friends were still on the air, that cute little baby would now be a fully fledged teenager.

It's one of those things that makes you look back and realize just how long ago you were first watching the famous sitcom.

(And Lucy agreed with the reaction.)

Honestly, anyone who wasn't even a little bit shook is kidding themselves.

And who encapsulates this mood better than Chandler?

Looks like someone is still having a touch of denial!

One Twitter-user had a pretty great idea, though.

Basically, this was all of us.

Also, we completed that thought in Jamie Lee Curtis's voice: "Oh, I'm like the crypt-keeper!"

Time flies when you're not looking.

No matter how much you protest!

Because some people were a little too shook!

And they brought up another excellent point:

When Friends began, Ross was newly divorced from his wife Carol--but their son Ben had been conceived before the split.

So Ben's been around for most of the show.

He was born at the end of season 1, and had a recurring part for the remainder of the series.

We got to see Ben age throughout the show.

In seasons 1 and 2, Ben was an infant. Then he was shown as a toddler through seasons 3 to 5. Ben is a young boy in seasons 6 to 8 (played by Cole Sprouse!)

That makes him very much the big brother.

Based on the distance between their births, Ben would be more than 6 years older than Emma.

And they're not the only 'Friends' babies.

What about the triplets that Phoebe carried? Or Monica and Chandler's children? They'd have aged significantly too!

Let's look at the triplets.

Phoebe served as a surrogate for her brother's triplets. They were born on April 30th, 1998. That would make Chandler, Leslie, and Frank Jr. 20 years old now!

Monica and Chandler were parents.

And they got the surprise of their lives, getting twins instead of just one baby.

So how old would the twins be?

Basically, the kids are (figuratively) growing up.

And Cole Sprouse, who played Ben, is now 25--the same age that Jennifer Aniston was when she started playing Rachel Green.

Ben would be 23 today, right? Well, that's only two years younger than his Aunt Monica was at the start of the show (25)!

Remember? Her Dad was pretty positive it was gleba: the “fleshy, spore-bearing inner mass of a certain fungi."

Happy 25th birthday, Friends! (But also, how old do you feel now?)

Not everybody has this luxury, though!

Also, the twins who played Emma are turning 16 this summer!

So, a happy early birthday to Cali Sheldon as well!

So, yeah, we're getting old.

But we can always pop in another Friends re-run and pretend that we're not!