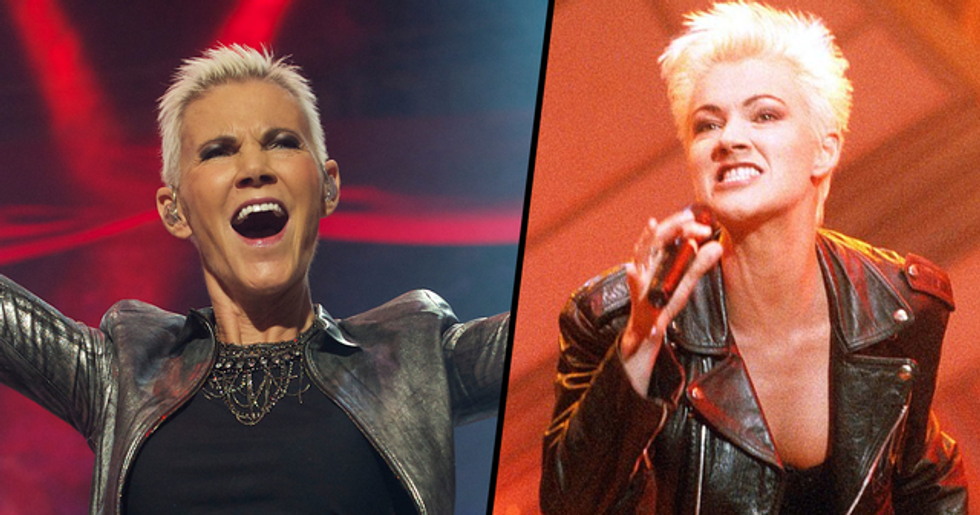 The Swedish singer and member of pop-duo, Roxette, Marie Fredriksson, has sadly passed away aged sixty-one.

Her family has just announced the heartbreaking news, informing her millions of fans that the musician had passed away.

Marie Fredriksson has left a mark on the world of music.

The Swedish singer, who formed half of the pop-duo, Roxette, and was the most famous for hits such as "It Must Have Been Love" and "The Look", has left behind a musical legacy, aged only sixty-one.

And since the news of her passing has spread, people have been taking to social media to share tributes to the singer.

Marie's music will certainly always hold a very special place in our hearts.

Roxette's music is synonymous with so many people's childhoods.

Absolutely devastated to hear about the passing of Marie Fredriksson, Roxette were my first foray into songwriting… https://t.co/X7utzitb73
— The Far North Ⓥ (@The Far North Ⓥ)1575982547.0

One Twitter user wrote: "A little piece of my heart and my youth just died hearing Marie Fredriksson has passed away."

Some have been sharing videos of the singer's iconic songs.

Reminding us all of what a wonderful talent Marie was.

It's clear that Marie touched the lives of many.

And it's a hard Winter's day.. She was Roxette for us. ❤️Rest in peace Marie Fredriksson. #musthavebeenlove… https://t.co/T4bgRyszTZ
— Priya Solomon (@Priya Solomon)1575984429.0

Marie famously had a long battle with cancer...

The singer was diagnosed with a brain tumor in 2002, where doctors gave her just a twenty percent chance of survival. However, she defied the odds and battled on.

However, years of cancer treatments left her with severe radiation damage...

And her 2004 solo album, The Change was dedicated to her experiences in and out of the hospital.

But now, her cancer got the better of her...

And she tragically succumbed to the devastating illness yesterday morning. Her family have said in a statement, "It is with great sadness that we have to announce that one of our biggest and most beloved artists is gone. Marie Fredriksson died on the morning of December 9 in the suites of her previous illness." She leaves behind a husband and 2 children.

Marie will be sorely missed.

"Marie leaves us a grand musical legacy. Her amazing voice—both strong and sensitive—and her magical live performances will be remembered by all of us who were lucky enough to witness them. But we also remember a wonderful person with a huge appetite for life, and woman with a very big heart who cared for everybody she met," said her management, Dimberg Jernberg, in a statement. Rest in peace, Marie Fredriksson. But, heartbreakingly so, Marie isn't the only tragic death this year...