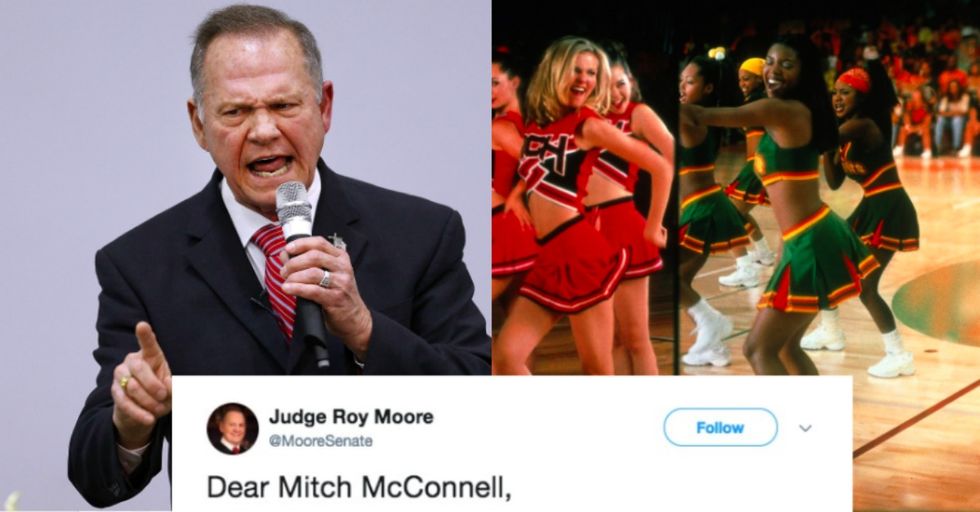 Quick catch up: Roy Moore is the Republican nominee for the Alabama U.S. Senate seat. He is also definitely a pedophile. Like 100 percent. Like, he was banned from a mall because he was so gross with teenage girls. Yes, seriously.

Mitch McConnell, the Republican Senate Majority Leader, said earlier this week that he believes the women who are accusing Roy Moore and that Moore should step aside from the race. It's the only good thing Mitch McConnell has ever said.

Roy Moore did not take too kindly to that.

Roy Moore wanted to send a "super tough guy" threat to Mitch McConnell, so he did what all fightin' men do: He turned to Twitter.

But oopsy daisy! Bring It On is the name of a (fantastic) movie from the year 2000 that is all about high school cheerleaders.

Bring It On is a movie about high school cheerleaders https://t.co/THLhYwpZSf
— Chris Hansen (@Chris Hansen)1510799061.0

Female ones. Scantily clad ones. Underage ones. Not the best movie for a child molester to invoke!

It was such a bad idea for Moore to mention this movie that Bring It On's director, Peyton Reed, even weighed in:

Please excuse the strong language. It's understandable to get upset when a "F***ING PEDOPHILE" uses your high school cheerleader movie to bully the Senate Majority Leader.

It's funny, but it's also terrible.

When you let your friend pick the movie and it’s always the one about underage high school cheerleaders https://t.co/nHYbUeAMWr
— Chris Illuminati (@Chris Illuminati)1510798555.0

While Roy Moore is still vehemently denying that he liked to prey on teenage girls when he was much older, the number of women who've accused him of doing just that has climbed to six.

Writer Parker Molloy was quick with the reactions.

She wrote her own letters to Mitch McConnell, in the same format of Roy Moore's, only with more appropriate messages/movie titles that better describe how we all feel about the Alabama judge/pedophile. While there are likely more than 10 things we all hate about Roy Moore, it's a good start...

Now this one is just hilarious.

It reads like, "Dear Mitch McConnell, mean girls are trying to say I touched them inappropriately when I was twice their age but I swear it's not true! No matter how many of them come forward, give harrowing accounts, and cry because of the lifelong trauma I've caused them, I definitely didn't do it!!!"

The hits just keep on coming.

Roy Moore, we Can't Hardly Wait until you are taken down by your unconscionable actions. It's only a matter of time.