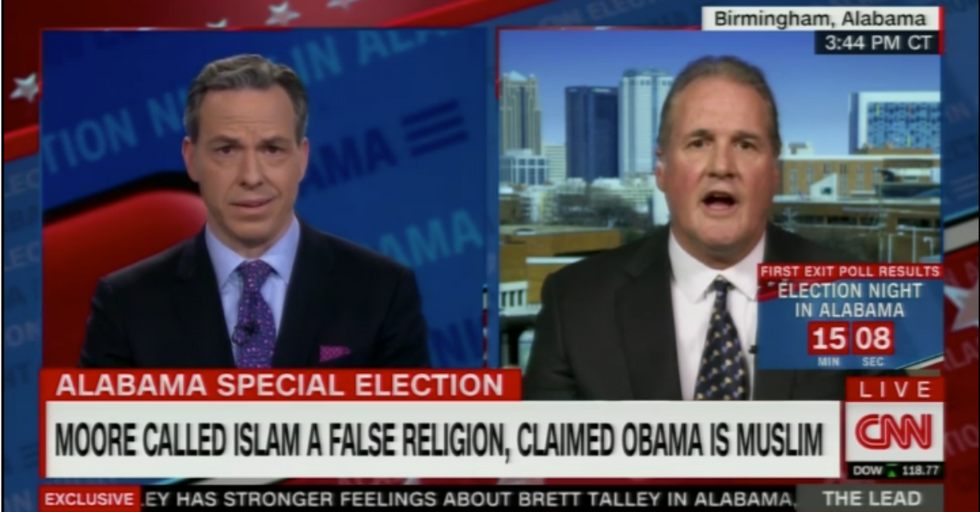 Last night, Democrat Doug Jones made history and caused a country-wide sigh of relief when he won the election for the U.S. Senate seat in Alabama, a historically fiery red state. He beat Roy Moore, the Republican candidate who's been in the news lately for multiple insane things, not the least of which is his history of pedophilia.

But let's rewind a moment and take it back to before the election results were in. Earlier in the night, Roy Moore spokesperson Ted Crockett appeared on CNN and talked with Jake Tapper about his candidate. The guy literally lost his head when he was presented with a simple fact that overturned his prejudiced views. While the election was historic, the moment Ted Crockett shorted out on national television is by far the most memorable moment of the night.

It's been decades since Alabama has elected a Democratic senator, but last night was the night!

Doug Jones defeated child molester Roy Moore by what many are saying is a too-close margin. Nevertheless, the Republican loss was a giant blow to the GOP and to Trump, who'd endorsed Moore (even though he's a pedophile) in one of, if not the most embarrassing endorsements in history made by a president and his political party.

But the GOP's and Trump's endorsement of Roy Moore wasn't even the most embarrassing thing about the race.

It's the morning after the election and Roy Moore has yet to concede because he's a delusional sore loser. Some think he will call for a recount. Though the vote was closer than it ever should have been, it wasn't recount-level close. According to USA Today, Alabama law states that a recount occurs automatically if an election is won by fewer than 0.5 percent of the votes. Early results show that Jones beat Moore by more than 1.5 percent.

But the embarrassment doesn't end there.

Before Roy Moore lost the election, he rode to the polls to vote (for himself, we assume) on a horse named Sassy. Yes, this is a thing that a pedophilic politician did in 2017. Everything about this race for the Senate seat was already beyond comprehension, and then this happened.

And while we're on the subject of embarrassments, take a look at how white people voted in this election:

It's about time America appreciate the political significance of #BlackWomen, but can someone explain why white wom… https://t.co/hQaCir8FaY
— Keith Boykin (@Keith Boykin)1513169632.0

And yet, somehow it gets worse. Because Donald Trump can never be wrong, he tweeted this following the election:

"I was right!" the President of the United States feels he has to say after he's proven wrong. This declaration, of course, came hours after he claimed not to have met the women who've accused him of sexual assault. Obviously, that's not true, and obviously, pictures of him standing right beside them surfaced. Also, one of those people was his wife. But perhaps the most precious and definitely the most rewatchable embarrassing moment on election night for the Republicans came when Roy Moore's spokesperson appeared on CNN with Jake Tapper...

Ted Crockett is a thrice-elected official and former Shelby County, Alabama Commissioner who was a spokesman for the Roy Moore campaign. He went on The Lead, a CNN program hosted by Jake Tapper, where he appeared to literally malfunction when Tapper schooled him on the law for swearing in politicians.

Roy Moore campaign spokesman responds with silence when asked if he knew people can be sworn in with a text other t… https://t.co/nEuaCU2jvh
— The Lead CNN (@The Lead CNN)1513116424.0

Tapper urged Crockett to explain some of Moore's radical views, like the one that Muslims shouldn't be allowed to serve in Congress. "Because you have to swear on the Bible," Crockett said. "You have to swear on a Bible to be an elected official in the United States of America. He alleges that a Muslim cannot do that, ethically, swearing on the Bible." Tapper calmly explained that elected officials don't have to swear on a Christian Bible at all. There's nothing in the Constitution that requires this. Crockett pathetically tried to defend his statement by saying he swore on the Bible three times. Tapper replied, "I'm sure you have. I'm sure you've picked a Bible, but the law is not that you have to swear on a Christian Bible. That is not the law." And that's when Crockett fell completely silent. For more than five seconds. You have to watch it.

Crockett was completely stunned by that fact and just sat there, slack-jawed and blinking, until Tapper asked, "You don't know that?" Oh goodness, it was a perfect moment. Go ahead, watch it again. We'll wait.

Crockett couldn't seem to recover, and Jake Tapper ended the interview almost immediately after that. He was just so silent!

You could play "Stairway to Heaven" during the time it takes this guy to process this information. https://t.co/K6gu250Or0
— WilliamThornton (@WilliamThornton)1513119476.0

There's a lady who knows, all that glitters is gold,  and she also knows you don't have to swear on a Bible. ...That's how "Stairway to Heaven" starts, right?

It actually looked like Crockett's brain blew a fuse and he couldn't compute what he'd just heard.

It was amazing. And amazingly embarrassing for Crockett and for the guy who let him represent him on television. Who was that again? Oh yeah, pedophile Roy Moore.

These are three important steps for any decent person to take:

Tapper grills Crockett throughout the whole interview – it's truly a mess that's a complete joy to watch. But then, as you're watching, you'll slowly realize that this dying robot of a man was elected to a government position three times, and your head will start to hurt. That's where the Excedrin come in. Of course, if Crockett knew his American history, he'd know that there have been several prominent politicians who did not swear in on a Bible...

Yeah, we're talking way back in the day, in 1825. Back then, when America was but a wee babe, they took "separation of church and state" very seriously.

And let's not forget Teddy Roosevelt, Franklin Pierce, and LBJ.

Teddy didn't swear on a Bible in 1901, Franklin swore in on a book of law, just like John Quincy Adams, and Lyndon B. Johnson was sworn in quickly on a Roman Catholic prayer book after JFK was assassinated in 1963. Oh, and the one that must sting the most for Crockett is Keith Ellison, who in 2007 became the first Muslim member of Congress. He swore in on Thomas Jefferson's Quran.

Of course, others imagined what they'd choose to swear on if they were ever elected to public office:

Harry Potter's a pretty good choice. TBH we definitely need more witches and wizards in Congress. It just seems like that would help a lot.

Honestly, we'd vote for anyone who loves Twin Peaks enough to actually do this. We're pretty certain you can't be a massive fan of Twin Peaks and also a monster. Please don't prove us wrong.

TV writer Jess Dweck had a fantastic idea for what Doug Jones should swear on when he's inaugurated:

You know, because Roy Moore was banned from a shopping mall in the 1980s because he liked to prey on teenage girls? Yeah, good thing he wasn't elected, huh?