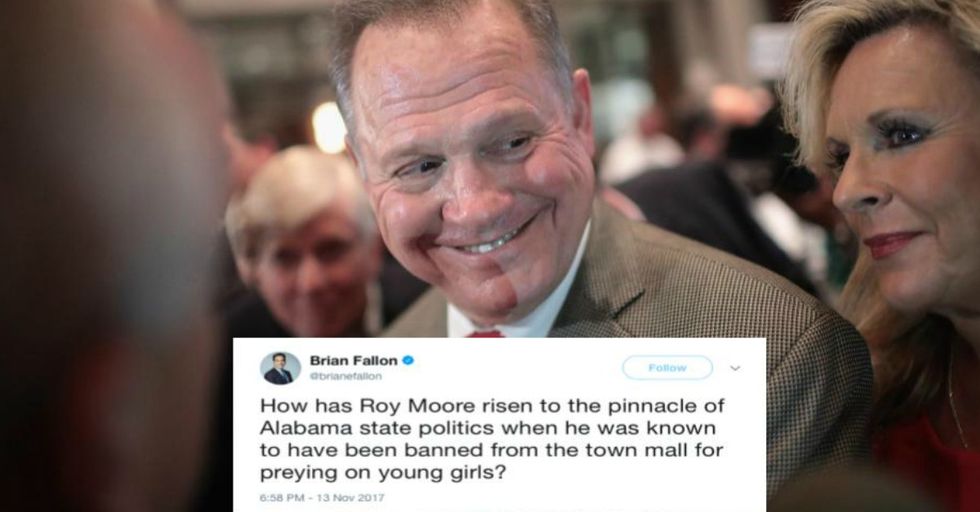 Republican Senate hopeful Roy Moore has a lot of answering to do. Last week, the Washington Post broke a story about the longtime Alabama judge molesting 14-year-old Leigh Corfman. As the week progressed, three more women came forward, each alleging Moore molested them while they were in their teens and he was in his early thirties. On Monday, another woman, Beverly Young Nelson, came forward with new accusations, as well as proof – a signature from Moore on her high school yearbook (Moore had previously denied even meeting his accusers).

In fact, he said this about Nelson. "I can tell you without hesitation, this is absolutely false. I never did what she said I did. I don't even know the woman."

Again, she has his damn signature on her school yearbook.

Now, more flames have been added to the pyre of Moore's lies.

The New Yorker revealed that Moore was informally banned from Alabama's Gadsden Mall as well as the YMCA for sexually harassing teenagers. While Moore wasn't on any formal list, several people went on the record saying that they remembered he was a frequent presence at the mall, “usually alone" and “well-dressed in slacks and a button-down shirt."

The news comes less than a week after Teresa Jones, a former deputy district attorney for Etowah County verified that people knew Moore was a pervert.

She told CNN "it was common knowledge that Roy dated high-school girls." While she couldn't verify the mall ban, she did acknowledge "It’s a rumor I’ve heard for years."

Apparently, Moore's presence was a source of concern for mall workers and security in the 1980's.

One former mall employee, Greg Legat, who worked at Gadsden from 1981 to 1985 spoke about a police officer named J. D. Thomas who worked security at the mall. "J. D. was a fixture there, when I was working at the store," Legat said. "He really looked after the kids there. He was a good guy. J. D. told me, ‘If you see Roy, let me know. He’s banned from the mall... If you see Moore here, tell me. I’ll take care of him.’"

An IT worker, Jason Nelms, who once used to frequent the mall confirmed this accounting.

"It was a joke from one of the managers/assistant managers that they couldn’t keep an eye on their theater and an eye on the kids outside. Us kids would congregate outside on the sidewalk near the theater after the mall closed on Friday and Saturday nights. Anyway, when asked why they had to keep an eye outside, they said that some older guy had been trying to pick up younger girls. They didn’t go beyond that but one of the concession workers whispered to us later that it was Roy Moore he was talking about," Nelms said.

Other people also confirmed this accounting, including two police officers, who remained unnamed.

"The general knowledge at the time when I moved here was that this guy is a lawyer cruising the mall for high-school dates," one officer said. "I was told by a girl who worked at the mall that he’d been run off from there, from a number of stores. Maybe not legally banned, but run off," another recounted, adding, "I heard from one girl who had to tell the manager of a store at the mall to get Moore to leave her alone."

The officers were disappointed by Moore's behavior.

"A friend of mine told me he was banned from there," the officer said. "I actually voted for Moore. I liked him at one time. But I’m basically disgusted now, to be honest with you. Some of the things he’s said recently, I’ve changed my tune completely about this guy." "When I heard what he said on ‘Hannity’ the other night, I almost stood straight up. The thing about how he’s never dated anybody without their mother’s permission, that appalled me. That made me want to throw up. Why would you need someone’s permission to date somebody? I’m probably gonna write in Luther Strange." Wait, what's that smell? Oh, that's Roy Moore's lies going up in flames.