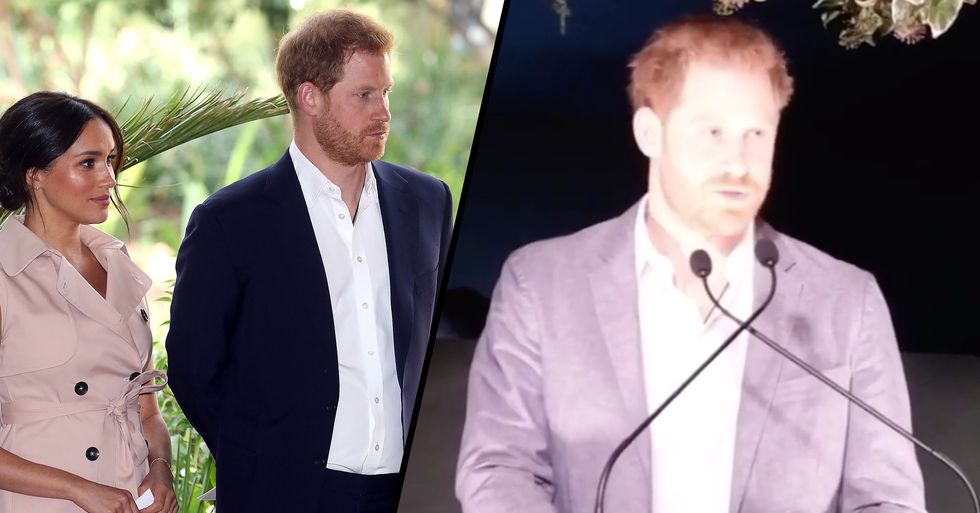 And a few days ago Prince Harry broke his silence about the controversial decision. However, someone's taken it upon themselves to analyze the speech and the explanations are actually very surprising.

Meghan hasn't had the easiest time though...

Many dedicated royalists weren't happy to see an American woman of color in the monarchy...

However, reports surfaced that senior royals were left “hurt" by the shock announcement that was made "without warning."

A family friend has made some shocking claims...

While attending a charity event, Harry delivered a heartfelt speech about their split from the royal family. Keep scrolling for the full clip.

He went on to praise those who have been supportive...

"The UK is my home and a place that I love. That will never change. I have grown up feeling support from so many of you, and I watched as you welcomed Meghan with open arms as you saw me find the love and happiness that I had hoped for all my life. Finally, the second son of Diana got hitched, hurray!" "I also know you've come to know me well enough over all these years to trust that the woman I chose as my wife upholds the same values as I do. And she does, and she's the same woman I fell in love with. We both do everything we can to fly the flag and carry out our roles for this country with pride..."

"Our hope was to continue serving the Queen, the commonwealth, and my military associations, but without public funding," he said. "Unfortunately, that wasn't possible. I've accepted this, knowing that it doesn't change who I am or how committed I am. But I hope that helps you understand what it had to come to..." It was confirmed that Meghan and Harry would no longer be using their HRH titles, and are also intending on reimbursing U.K. taxpayers for renovations made to Frogmore Cottage last year.

"I was born into this life, and it is a great honor to serve my country and the Queen. When I lost my mum 23 years ago, you took me under your wing," he continued. "You've looked out for me for so long, but the media is a powerful force, and my hope is one day our collective support for each other can be more powerful because this is so much bigger than just us."

"I will always have the utmost respect for my grandmother, my commander in chief, and I am incredibly grateful to her and the rest of my family, for the support they have shown Meghan and I over the last few months. I will continue to be the same man who holds his country dear and dedicates his life to supporting the causes, charities and military communities that are so important to me."

Rebecca English, a royal correspondent for the Daily Mail decided to delve deeper into the words.

English picked out some of what she considers to be the most important aspects of the speech and gave us thorough explanations as to what she believes his motivations were.

The first phrase she picked up on was: "You saw me find the love and happiness I'd hoped for all my life."

She referred to this as a "plea for sympathy," saying: "It's been a tough week for Harry, whose decision to step back from life as a senior royal and move to Canada has not been universally popular. Here he wants to remind us that we shouldn't begrudge him the happiness he has finally found and allow him to live "his best life" away from the royal family."

She then moved to: "defending Meghan."

When he says: "I also know you've come to know me well enough over all these years to trust the woman I chose as my wife upholds the same values I do," he is reportedly trying to defend Meghan.

English wrote that he understands that the blame is placed heavily on his wife.

So he tries to "change the narrative" hence the reference to the fact that he's been wrestling with the idea of leaving the royals long before he even met Meghan.

"I know I haven't always got it right."

She then discusses this phrase saying: "While the Queen has openly talked about her sadness and regret over what has happened, this is the first time Harry admits he has made mistakes (although he doesn't specify what) it can be taken as a reference to recent event such as being criticized for preaching about the environment while taking private jets). It is also clear that this decision has weighed heavily on his mind and he wants a far from entirely sympathetic public to understand this."

She also talks about the mention of a "compromise."

When Harry says "unfortunately that [a comprimise] wasn't possible," he is referring to the fact that they did try and work something out but it didn't end well.

English explains how "Harry cannot risk making it clear that his hand has been forced."

"After creating a website behind the backs of his family to launch his and Meghan's new vision for a royal life... Harry was firmly slapped down by his grandmother and told this would neither be acceptable or possible." Interesting analysis there, because that's not what I got from that statement.

It's all about perception...

Check out the full analysis above, but if we're being serious about this, it depends on a bunch of external factors that you decide to take from the speech. I see an exhausted man being stretched to his limits by both sides of his family forced to give his position, while English sees this as a borderline manipulative "plea" for sympathy. Just leave the poor man alone.

Check out the full clip of his below and see if you agree with English:

This marks a whole new chapter for Meghan and Harry. A clip has recently resurfaced that shows who Meghan apparently "really is," keep scrolling to take a look...