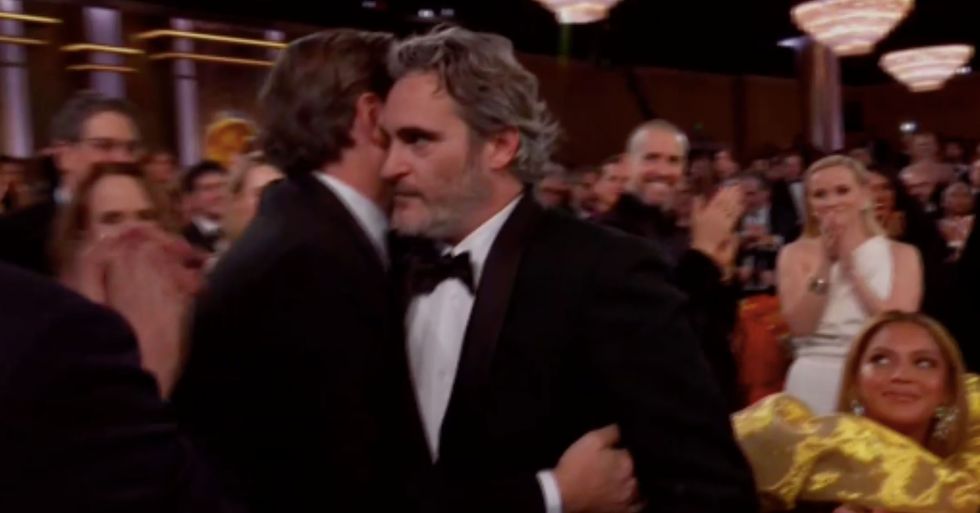 Our favorite actors from across the pond swept up some major wins but the rest of the world managed to pull it back.

While the majority of guests and nominees seemed happy for the deserving winners, Queen B, Beyonce, has been slammed for being rude during Joaquin Phoenix's win.

He has high hopes for the movie...

We wish we could say the same for Leonardo DiCaprio... But we can't.

The actor was nominated for Best Actor (in a motion picture), but was beaten by none other than Taron Egerton for his role in Rocketman. We mean, if there's one person to beat DiCaprio, it would be young, fake Elton John, wouldn't it?

And it seems as though Brad also agrees with us! He started off his speech like this, "I also have to thank my partner in crime, Leonardo DiCaprio. Before The Revenant, I used to watch year after year, his co-stars win awards and get up and thank him profusely and I now know why..."

Last night's Golden Globes host Ricky Gervais took to the stage and gave us a night to remember with some brutally hilarious jokes about "fake celebrities."

But one of the most deserving wins of the evening had to go to Joaquin Phoenix...

He also made references to climate change...

He said to his fellow A-listers, "We don't have to take private jets to Palm Springs ... I'll try to do better, and I hope you will too."

Fans have praised the actor heavily...

Joaquin Phoenix calling out the bullshit of Awards Season and celebrating the work of his fellow nominees! Plus he… https://t.co/CEWomZVnnv
— Matt Neglia (@Matt Neglia)1578283109.0

And we must say, he truly deserved his award.

Beyonce and her husband, Jay-Z, were sat a few feet away from the winning actor.

The singer is visibly seen sitting behind Phoenix as he stands up to accept his award, and she seems to be the only member of the audience who doesn't bother standing up... or even to clap her hands, for that matter!

This hasn't made the singer look good, at all.

Many have branded Beyonce as "rude" and "disrespectful" for refusing to stand for Phoenix's deserved win.

Many of her fans were disappointed in her...

@sbstryker It makes her look bad tbh. And I’m a Beyoncé fan. I thought it was because her dress would have blocked… https://t.co/DPZ5OPKcWj
— Trisha Sword (@Trisha Sword)1578286928.0

But people did point out a possible reason as to why she didn't stand.

Her dress was somewhat of a spectacle...

And some fans have put down the reason for her sitting to the inconvenience of her dress.

The jokes quickly flooded in...

And we must say, the sleeves on her dress were pretty huge.

Let's hope that this is merely the reason for her not standing up...

But either way, Phoenix made a very gracious winner and he was overall heavily applauded for his hard work and talent. For more Golden Globes, keep scrolling to see the best and the worst dressed of this year...