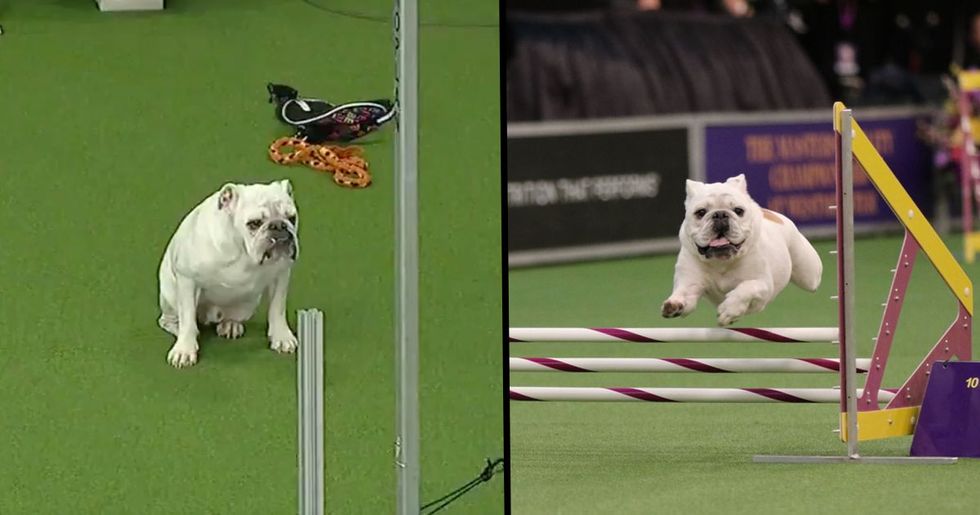 If you think of dog shows, you probably think of perfectly puffed and manicured dogs strutting around. Or perhaps you think of German shepherds running a perfect route, as if it’s been practicing all year with its sheep. But this year, there was a new dog on the scene.

In the face of huge crowds and bright lights, one dog stepped up and pulled off the performance of a lifetime. It reminded us of just how talented so many animals are. But is this bulldog the most talented of them all?

Animals can do the craziest things.

For some reason, humans have decided that we are the most impressive animals in the world. Sure, we have opposable thumbs, music festivals, pizza, football and the internet, but how can we hope to compete with the animal kingdom?

Have you ever tried to stand on a ball?

I can assure you, having accidentally done it on multiple occasions, it's not as easy as this guy makes it look. In fact, it usually results in falling on the floor. But this guy is smashing it. And he can fly. This is just an extra skill he's showing off.

This guy knows how to relax.

After a hard day out on the rivers fishing, or climbing trees in search of honey, sometimes all you need is a good sit down. This bear is showing up the rest of his species with his mastery of the chair.

Is there anything funnier than seeing animals acting like humans?

This pig must be one of the coolest animals on the planet. He's cooler than most people too. He's definitely worked out that rolling is the way to go.

Cats are known for their agility.

Life as a cat requires a lot of jumping, landing and generally fending for themselves. But no matter what tricks cats can master, they're still always going to be second best.

Man only has one best friend.

Their boundless enthusiasm, together with their unconditional love, makes dogs the quintessential partner for man on earth. And, if you can get them to pay attention, it's amazing what they can achieve.

Where better to show off than at the Westminster Dog Show?

Earlier this week it was the biggest event of the year for dogs all over the world. It was the 143rd Westminster Dog Show, and 3,000 dogs came together to compete at Madison Square Gardens, New York.

It was a show for everyone.

As the dogs competed in several different categories, it gave the audience a chance to really get into it as they started to back their favourites. It seems unlikely that this dog could ever win with legs that size.

It was the dog equivalent of fashion week.

Much as during fashion week we might see pictures of models wearing the strangest of outfits, in the name of fashion, the dog show had some crazy looks going on. This dog looks like it was in a Little Miss beauty pageant.

These poodles are really putting the other dogs to shame.

Usually, one of the main perks of being a dog is the low levels of self-maintenance that are required. But when the other dogs came across these poodles, I bet they wished they'd brushed their hair a couple more times.

This must be the most agile dog in all the land.

Okay so border collies do tend to be quick on their feet, but take a look at the pace of this dog. Verb, who won the category of Masters Agility, moves his feet quicker than Ronaldo, even though he's got twice as many.

Not all of the dogs were doing quite what they were supposed to.

This dog, Winky, took nearly triple the amount of time to complete the course, compared with the winner. It's dogs like this that remind us what we are actually watching: dogs doing an assault course.

With a name like King, how could he not win?

The Best In Show winner is King, the wire fox terrier. He certainly has a very regal moustache. This dog goes to show that standing out from the crowd can work, if you carry it out with confidence. Just look at him strut.

Is this a classic case of making it look easy?

When watching Westminster Dog Show, you’re required to say “Our dog could do that” every two minutes while petting him.
— Mary (@Mary)1549944200.0

Most dogs bark at the telephone, lie down when you tell them to roll, and go running off when you've only pretended to throw the stick. But these dogs are like a different species. Much like proud parents watching other people whose children are far more talented than their own, the dog show can be hard for some to take.

Have you ever wondered what life would be like without dogs?

The dogs might be impressive, but it's hard to beat watching the owners run around without their dogs. The best bit is that they presumably had to practice this multiple times on their own in order to get it right. This could be actual footage of them practicing.

Sadly it looks like one spectator had a life without dogs very much on his mind.

excuse me, who the hell let Cruella de Vil's stepson into the Westminster Dog Show. this is a legit security threat… https://t.co/dXkC6FMgCB
— Rodger Sherman (@Rodger Sherman)1550023451.0

Growing up, it was very clear that Cruella de Vil was the embodiment of pure evil. It's even in her name. Yet this spectator seemed to think that she was the perfect person to imitate at the dog show. Presumably he was chased away at some point as all the dogs decided to work together…

Much as in fashion week, there are some breeds of dog that just fit in, while others…

When you think of a bulldog, several images might come to mind. As they tend to be rotund and wrinkly, they don’t suggest agility.

Bulldogs are just not made for speed.

Bulldogs look like the angry, older gentleman of the dog world. We're far more used to seeing them doing the equivalent of waddling from the sofa to the fridge and back, than bounding enthusiastically in the wilderness.

But one bulldog has set himself apart from the crowd.

Meet Rudy. He is potentially the most athletic bulldog on the planet. Just take a look at him as he flies around this course, as if he were a border collie.

It might not be common, but now we know it's possible.

Who would have thought Rudy the Bulldog could fly around the Westminster Dog Show 2019 so fast! https://t.co/DrSwgxLlZy
— Fifty Percent (@Fifty Percent)1549960926.0

It looks like Rudy might have revolutionised the way people see bulldogs. Gone are the days of bulldogs being seen as stodgy. This is the start of the new era for bulldogs.

Even owners of other bulldogs are voicing surprise at the immense show of agility from Rudy. He definitely stole some hearts as he flew around the course.

People are calling for a recount.

In fact, people were so impressed with Rudy's performance, that they thought he should have won. In comparison with the other breeds of dogs that were competing, Rudy's performance is certainly the most impressive.

Not everyone was surprised by Rudy's performance.

Bulldogs know where it's at. They have always had it in them, they just didn't like to show-off like the others. Now the secret's out, their owners might start to be more demanding of them.

The dog show really is the biggest event of the year in the doggy calendar.

This dog, Sophie, loves the Westminster Dog Show. Her owner even calls it her Super Bowl. It's hard to disagree when you see how excited she is.

Meanwhile some dogs are hoping they can be there next year.

This boxer is loving the show so much that he can't stop jumping up and down in excitement. He certainly seems to have a lot of energy. Maybe next year he'll be there too.

And she's not the only pup to enjoy the show.

This dog, Bella, can't take her eyes off the screen. Although it seems like Bella might not be very self-aware. It looks like she thinks she and the dog on screen have a lot in common.

Other dogs are far more self-aware.

When u are watching the Westminster Dog Show and realize dog beauty standards are unrealistic https://t.co/Nf6LxI5D1U
— Robin Zlotnick (@Robin Zlotnick)1549933808.0

It's a bad day for cats.

Not all the pets were impressed with the viewing schedule. This cat speaks for cats everywhere when he questions why people are watching dogs jump through hoops, while they go out and catch birds every day.

The truth is that dogs are just better than cats.

Cats might be able to jump and hunt, but the ingenuity of some dogs is remarkable. Watching them play is a joy to behold.

And some dogs are just crazy talented.

In case there was any doubt left in your mind about the prowess of dogs in the physical world, this should set things straight. If I try to do jump rope on my own, I usually fall over, but these dogs are just bossing it. Today is the day to recognise just how skilful dogs really are.