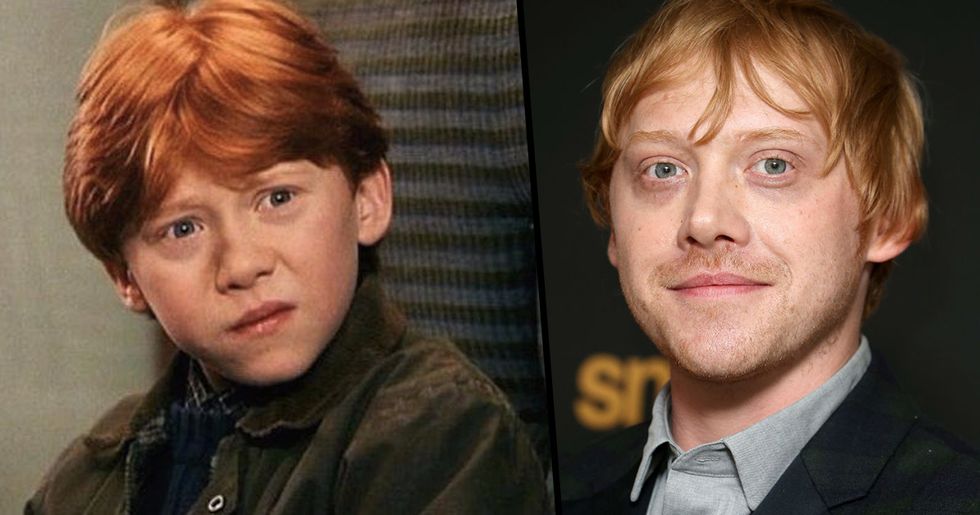 Being a child star may sound and look like fun, you don’t have to go to school and you’re a household name before you’re even sixteen, but there are some repercussions that come with peaking at such a young age. In some cases the child actor will grow up and hope to distance themselves from their child roles, defining themselves as an adult artist. However, some do find it hard to separate themselves from the role that made them such an iconic and recognisable figure. As was recently the case with Harry Potter actor Rupert Grint, who has revealed the sad reason he refused to watch the Harry Potter franchise since he starred in them over seven years ago.

Rupert Grint is best known for playing a boy wizard.

Although Rupert Grint may not have played the title role, the famous redhead is best known for playing Potter’s comedic best friend – Ronald Weasley.

Grint was already a seasoned actor.

At ten years old, Grint had already starred in a few choice roles, although it was his stint as the courageous wizard that made him a recognized name.

Of course, along with his two besties.

Along with fellow Harry Potter stars Daniel Radcliffe and Emma Watson, both of whom have gone on to star in numerous blockbusters since.

Out of the 3, Grint has always taken the silent path.

Radcliffe has gone on to star in films such as Horns and Kill Your Darlings, while Watson has since re-introduced herself to a new generation as the new iteration of Belle in Disney’s Beauty and the Beast. While Grint has taken to smaller roles, not wanting to be in the public eye.

Recently he did appear on our Christmas screens.

However, Grint did recently appear in the BBC’s adaptation of Agatha Christie’s The ABC Murders, playing the iconic role of Inspector Crome.

But how does he feel about his wizarding past?

Whereas Radcliffe and Watson have always looked back at their time in Hogwarts with affection and fondness, Grint has recently admitted that he hasn’t even watched all of the films.

In fact, Grint had not seen Philosopher’s Stone since its premiere in 2001, but has since watched it recently.

As he, himself, stated:

"I did see Harry Potter and the Philosopher's Stone not long ago, for the first time since the premiere, and I actually enjoyed looking back."

He also revealed which of the films he’d be happy to watch up to.

When asked watch instalment of the franchise he’s to happy to watch now, Grint revealed that he would be able to watch up to the third movie in the series.

"I could probably go up to Harry Potter and the Prisoner of Azkaban."

I mean, it is the best one!

It’s completely understandable, the third movie is the strongest entry.

But Grint’s reasoning goes deeper than that.

In the third movie, Grint was only 15 years old and since then a lot in his life has changed.

He is no longer the same little wizard.

Grint admits that life as a Harry Potter star is hard, because you are always expected to be your character.

For some this must be easy.

I’m sure for some of the cast this is an easy task, Watson and Hermione are the same person after all and Tom Felton loves paying homage to his stint has Hogwarts bully, Draco Malfoy.

But for Grint, being Ron isn’t so easy.

But it appears that the same cannot be said of Grint, who is a lot more subdued than his character in the films.

And when you’re not on camera, you want to be yourself.

Grint stated that: "With the fame, you're almost being the character, even when you're not in character."

I’m sure no one would blame Grint for feeling this way, after all, he became a celebrity when he was only ten years old.

Something he has also spoken out about:

"From the moment I got the part, my life completely changed. It was a weird time and it has taken me a long while to process."

It really makes you think.

It’s hard to believe that being in a blockbuster film franchise could impact your life in such a negative way.

But there are downsides to being a celebrity.

Grint has even talked about how he dislikes being recognised in public.

DIY is a basic human right.

"Just being invisible can still be difficult. Sometimes you just want to go to B&Q."

After his stint on The ABC Murders, I’m sure we’ll be seeing Grint a bit more in future.

Although he won’t watch himself in those either.

Let’s face it, if he doesn’t watch Harry Potter, then he won’t be watching anything else he does either.

But there is another profession he could go into.

But if his acting career doesn’t last, I guess Grint could always get a job as a professional Ed Sheeran lookalike.

After all, they have worked together before.

It would make sense, Grint has appeared in Sheeran’s music video for his song “Lego House."

From Harry Potter to Ed Sheeran, could life get any better for Grint?

And maybe Grint’s relationship with Harry Potter isn’t over.

With the wizarding world continuing in the form of the Fantastic Beasts franchise, maybe we will see Grint returning to J.K. Rowling’s world.

He could play another Weasley.

After all, Ron’s family is very big, Grint could return as another member of the famous redheaded family – maybe as Ron’s grandfather?

Even if we don't see him in the wizarding world again, I'm sure we'll be seeing this talented actor again.

The next time we hear from Grint, may also be the time that we learn that he has finally watched the entire HP franchise. Maybe.