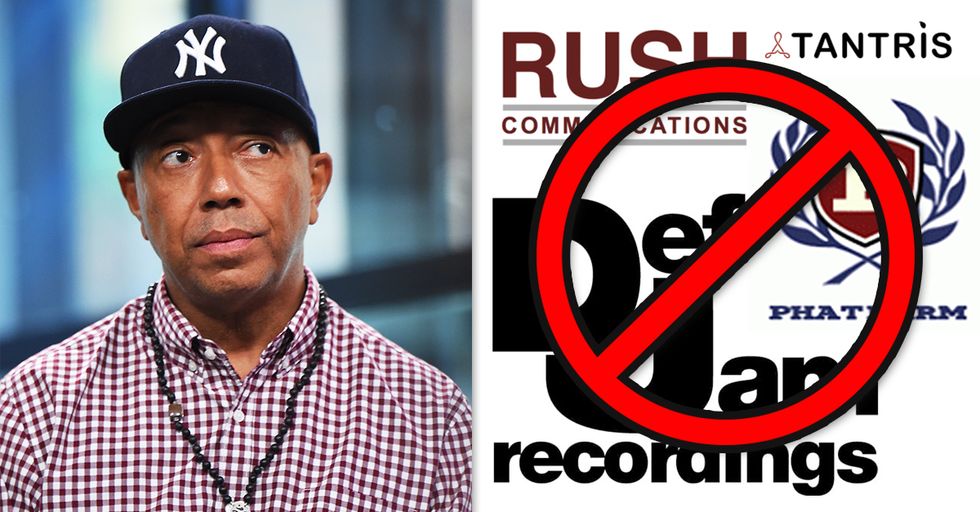 In early November, model Keri Claussen Khalighi accused Russell Simmons of sexually assaulting her when she was 17 years old. The Los Angeles Times produced a bombshell report of the accusations, which also highlighted Simmons' long and well-documented history of coercing very young models along with his frequent partner in crime, Hollywood director Brett Ratner.

Now, a new accuser has come forward, and the details are so severe, Simmons has finally been forced to step down from his businesses.

Jenny Lumet is an award-winning screenwriter with impeccable credentials.

Not only is she the writer of Rachel Getting Married and The Mummy, she is also the daughter of legendary filmmaker Sidney Lumet, who directed 12 Angry Men, Dog Day Afternoon, and Network.

In addition to this, she is connected to the Vanderbilts (yes, those Vanderbilts) because one of her father's ex-wives is Gloria Vanderbilt. The point is, Lumet is well-connected and supremely accomplished, so she doesn't need money or five minutes of fame, or any other of the myriad things people usually accuse sex assault survivors of needing when they speak out.

In fact, Lumet addresses this very pointedly in a heartbreaking firsthand account, which she published in the The Hollywood Reporter.

I have built a life in the past 25 years and a reputation in my industry. I need no one to have this visualization of me. I will, like the others, lose work because of this. I realize how privileged I am to be able to risk that. I have children. I'm aware that every mistake, act of thoughtlessness, hypocrisy or cruelty I've committed in my 50 years will be excavated, and they'll see all of it.

As Lumet acknowledges, people will dig into her story, which she has only told once before – to a close girlfriend just after the Harvey Weinstein accusations emerged.

She came forward now because Simmons denied assaulting Khalighi, a fact she knew, from experience, to likely be untrue. Simmons had earlier issued a statement which said,

I have never committed any acts of aggression or violence in my life. I would never knowingly cause fear or harm to anyone... abusing women in any way shape or form violates the very core of my being.

But that was a lie, as Lumet states when she describes Simmons raping her at 24.

In her bombshell of a letter, Lumet writes that she had known Simmons for years before the assault. She'd met him in 1987 when she acted in a film he was producing which starred Run DMC. They had a large circle of mutual acquaintances, and Simmons always seemed safe. As Lumet says: "...You were a fan of my grandmother, respected her, and told me so. You seemed sincere."

Simmons pursued Lumet on and off through the years, but the pursuit, in her words, was "lighthearted."

"You were charming and funny and charismatic and self-deprecating," she said, also describing how Simmons jokingly sent her 250 balloons with a note that read "Please baby, please baby, baby, baby, baby" after a line in a Spike Lee movie. Simmons told her he had a thing for a "little yellow girl," referring to Lumen's complexion. She assumed that his words, much like their banter and light flirting over the years, were harmless.

That is until one night in 1991 when the two met by chance at a restaurant called Indochine.

Simmons had a car and driver with him and offered Lumet a ride. She accepted (again, she'd known him for years and had mutual friends) but, as she said, "'At no time that night did I say: 'Russell, I will go home with you,' or 'Come home with me,' or 'I will have sex with you' or 'I have the desire to have sex with you.'" For reference, in 1991, Simmons would have been 34, a full decade older than Lumet, the granddaughter of the woman he "respected."

Lumet says she felt the shift the moment she gave the driver directions to where she lived.

"I gave the driver my address on 19th Street and 2nd Avenue'" Lumet said, but that was when things took a turn. As she describes:

I didn't understand, so I said: "Russell?"

Again you said to the driver: "No."

Then the car doors locked. It was loud. The noise made me jump.

This is a statement Lumet repeats throughout the piece. She couldn't reconcile this new, predatory Simmons with the man who admired her grandmother and sent her red balloons as a joke. She explains that the whole time, she tried to stay calm so that Simmons wouldn't become violent. She tried to glance at the driver for help, but he obeyed Simmons' directives, and she became frightened he would join in what had become a horrific ordeal.

Lumet describes how she felt at the moment they exited the car for Simmons' apartment.

I felt dread. I was tremulous. Off my feet. I felt an intense need to keep both of you calm. Was there a time or a space to run? I have no idea. Would somebody else have run? I have no idea. There were two men. One of whom obeyed the other. It was an overwhelming feeling...  I said, "Wait. Wait." I felt dread. I was very, very sad. I didn't know if the driver was a further threat, or an ally.

Thankfully, the driver didn't follow them up. Nevertheless, what followed was horrific.

Simmons moved Lumet to the bedroom. She said "wait" again, but Simmons persisted.

It is important to note here Lumet's reactions. She tried to be calm so she wouldn't make Simmons violent, and she tried to ask to go home. She didn't run, she didn't fight, because not all people run or become aggressive. The fight or flight instinct works differently for everyone, and, importantly, even if she'd fought, there's no reason to believe Simmons would have stopped his assault. After all, 17-year-old Khalighi fought, but Simmons still came back and penetrated her in the shower.

Simmons moved Lumet to the bedroom, where he proceeded to rape her.

Again, it is important to note, Lumet didn't fight. She was deeply afraid. As she states:

I made the trade in my mind. I thought, 'Just keep him calm, and you'll get home.' Maybe another person would have thought differently, or not made the trade... I desperately wanted to keep the situation from escalating. I wanted you to feel that I was not going to be difficult. I wanted to stay as contained as I could.

Finally, Simmons finished and he let her go. She took a taxi home and never told anyone about the incident until this year.

Every man or woman having trouble understanding the ripples of this abhorrent behavior should read Ms Lumet’s words. https://t.co/ESzXNkWDB6
— Ron Perlman (@Ron Perlman)1512056007.0

She and Simmons saw each other again over the years, and Lumet tried to act normally each time. Still:

In the end, Lumet explained why she came forward.

"I don't recall ever meeting any of the women who have spoken out against you, Russell," Lumet said. "But I can't leave those women twisting in the wind. Maybe the recalling of this incident can be helpful. I don't know if it can."

In response to Lumen's statement, Simmons stepped down from all of his companies.

Russell Simmons has removed himself from the businesses he founded after Jenny Lumet came forward with sexual misco… https://t.co/BLuCHg6H1K
— E! News (@E! News)1512062528.0

Simmons, who started as a manager for his younger brother, Joseph "Rev. Run" Simmons' hip-hop group, Run-D.M.C, has founded or co-founded several companies over the years including music label Def Jam Recordings, which, at one point or the other, had the likes of "Jay-Z, Public Enemy, LL Cool J, Iggy Azalea and Justin Bieber" signed to its roster. He also founded several successful clothing lines including Phat Farm, Argyleculture and Tantris, as well as philanthropic arm, Rush Communications, Inc.

In his statement, Simmons said he is stepping down to "commit myself to continuing my personal growth, spiritual learning and above all to listening." His full statement is below.

The experience of writing a story like this includes reliving all the old terror and shame as well as new fears for… https://t.co/7ot2LTC7aq
— Krista Vernoff (@Krista Vernoff)1512058461.0

I have been informed with great anguish of Jenny Lumet's recollection about our night together in 1991. I know Jenny and her family and have seen her several times over the years since the evening she described. While her memory of that evening is very different from mine, it is now clear to me that her feelings of fear and intimidation are real. While I have never been violent, I have been thoughtless and insensitive in some of my relationships over many decades, and I sincerely apologize.

This is a time of great transition. The voices of the voiceless, those who have been hurt or shamed, deserve and need to be heard. As the corridors of power inevitably make way for a new generation, I don't want to be a distraction, so I am removing myself from the businesses that I founded. The companies will now be run by a new and diverse generation of extraordinary executives who are moving the culture and consciousness forward. I will convert the studio for yogic science into a not-for-profit center of learning and healing. As for me, I will step aside and commit myself to continuing my personal growth, spiritual learning and above all to listening.