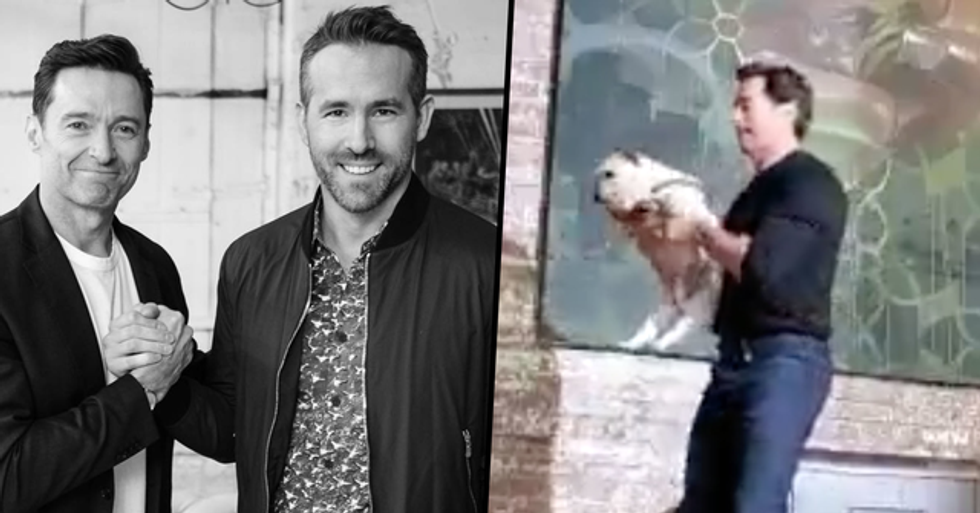 When it comes to Hollywood bromances, one of the first pairs to spring to mind are Hugh Jackman and Ryan Reynolds. The two actors have a lively online friendship, often swapping friendly insults and roasts through their social media platforms.

But one of the biggest developments in their ongoing banter came from an unlikely source. Jackman never expected this savage response to his dog video. Yikes.

He started his ongoing role as the superhero in the year 2000. He reprised the role many times, but ended his alliance with the character in 2017's Logan.

He's another actor, but this time of Canadian origin. Reynolds also has credits as a comedian, screenwriter and film producer.

Reynolds is best known for his role in the Deadpool franchise, in which he plays the title character.

Jackman and Reynolds are in a relationship of sorts.

They have on ongoing love/hate Twitter battle, where the pair roast each other for all manner of things, much to the delight of their fans.

Reynolds and Jackman are known for their Twitter feuds.

Reynolds tends to be the instigator, essentially trolling Jackman at every available opportunity - like this celebration of success, which he quipped was likely actually protesters, rather than fans.

Jackman takes pride in getting his own back, too.

In this iconic Instagram prank, Jackman (along with Jake Gyllenhaal) told Reynolds that a party he was attending had an ugly Christmas sweater dresscode - when actually no such code was in place.

How we love sassy celebrities.

And we're so glad Twitter and Instagram exist to allow us an insight to the daily LOLs of this famous gang.

This is some of the serendipitous trolling the internet has ever seen - Jackman didn't even need to say anything to totally roast Reynolds.

Although, funny as it is, it's also a little bit awkward.

Awkward as in, Reynolds appears to be (at least subconsciously) attracted to his pal, and the guy he constantly tries to make fun of online.

And his response was as hilarious as you'd expect. It's not every day you realise you've essentially married your best friend's lookalike.

Over the years, the pairs trolling has gotten pretty crazy.

There's nothing that's off-limits for these two!

They're kind of obsessed with each other.

It started when Jackman posted this video.

He quickly hit out, calling Jackman a "monster."

@RealHughJackman Apologies to Mr Hugh Jackson. When I wrote that I hadn’t yet seen or listened to the video. The do… https://t.co/v8bXkXRs3z
— Ryan Reynolds (@Ryan Reynolds)1598888735.0

Upon realizing his claims weren't quite accurate.

Want more from Reynolds? Scroll on for his controversial wedding venue...