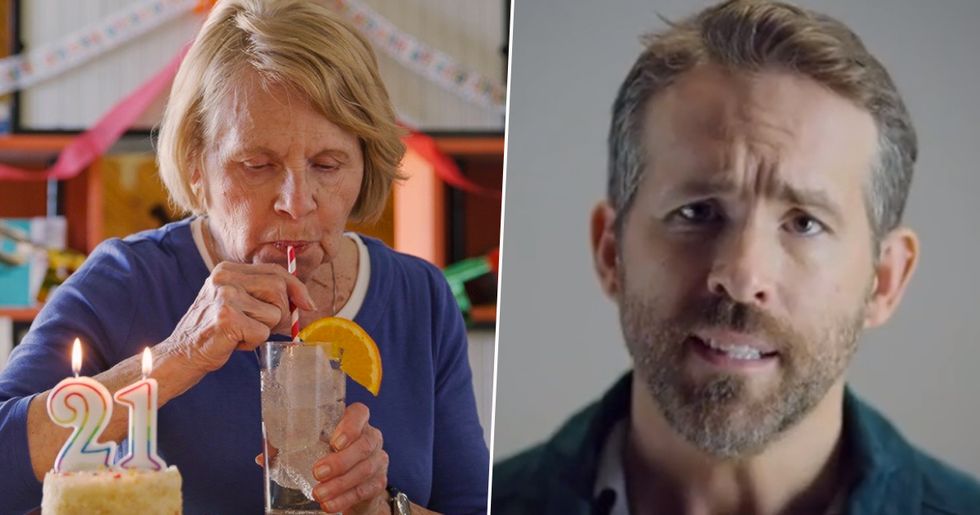 Ryan Reynolds is one of the funniest men on the Internet. Hands down.

From his relationship with wife, Blake Lively, to his budding bromance with Hugh Jackman, Reynolds gives just as much as he takes, and this time he's made us laugh once again!

This time he's making sure the 'world's oldest 21-year-old' gets her first legal drink.

Keep scrolling to check out the incredible vid.

Ryan Reynolds is one of the funniest men on the Internet.

He's funny on his own, with Blake Lively, and infamously via his relationship with Hugh Jackman. Ryan and Hugh constantly roast each other the way only real buds can. It seems pretty fundamental to their friendship.

Recently, things between them started escalating to a point of mutually assured destruction.

And although the big guy had a great day, you knew Reynolds was going to be up to something. As awesome as it must be having Ryan Reynolds as your best bud, How could you truly enjoy a birthday with friends like him? You know that somehow, someplace, he's going to roast you.

And then he did.

Posting to Instagram, Jackman shared the clip which Reynolds had inevitably sent to him personally... At the beginning of the clip, a clearly solemn Reynolds tells Jackman he just wanted to wish him a happy birthday, but now he feels hurt as a result of Jackman's insults at a live show recently.

Standing on stage, after finishing one of his classic songs, landing in his well-known Wolverine pose, Jackman said:

By the way, do not post that, I'll have like three million tweets from him in the next ten seconds.

Reynolds' birthday message was a response.

Or perhaps more retaliation/revenge attack than a mere response... He began by singing a LOVELY rendition of Happy Birthday To You, to Jackman. But then he took things to a new level when he roared:

And I'm not even f***ing professionally trained Jackman, you piece of s***.

His hand gestures were also a tad, ahem, erratic. But I'm pretty confident he wasn't make the peace sign.

Now Reynolds has made us laugh once again.

But this time it doesn't involve Hugh, instead it involves Arlene Manko, the world's oldest 21-year-old.

So while she should really be 84, because Arlene was born on February 29th, it's technically only her 21st. Woohoo. And the good news? Now she can legally drink!

And Reynolds was the first to serve her.

To give her the greatest gift of all, Reynolds gave her a nice tall glass of Aviation Gin and she absolutely loved it!

I had seven kids in 10 years. You think sometimes I didn’t want to drink? Follow the rules and do what you’re told is important. But I’m ready to party.

Is what she says when it finally hits the spot. Enjoy your 21st Arlene you party animal!