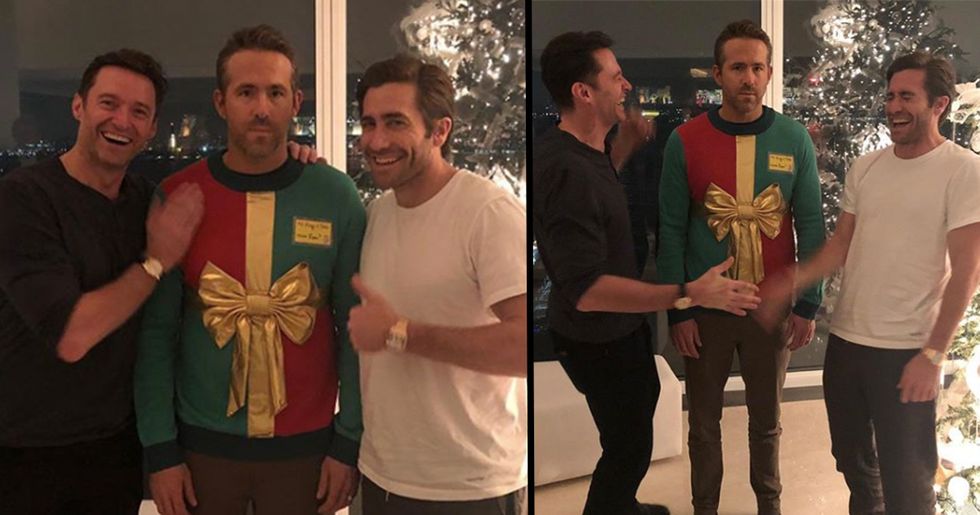 Since strutting into the box office in his red spandex, Ryan Reynolds has become everyone’s favourite celebrity prankster. Not only does he play a foul-mouthed Superhero, but he also pulls stunts of his fellow Hollywood stars, from talent such as Amy Schumer to Beatles singer, Paul McCartney. Reynolds has also built quite the reputation for trolling his glamorous wife, Gossip Girl actress, Blake Lively. The couple love foul-mouthing each other on their social media accounts. But recently, Reynolds was given a taste of his own medicine, when he was pranked by Hugh Jackman and Jake Gyllenhaal – and the prank had a festive twist.

Ryan Reynolds has always been a joker.

Ryan Reynolds has always had a reputation for being a prankster among the Hollywood stars.

Known for pranking his fellow celebrities.

It’s actually ironic that he would play a character like Deadpool and not Batman’s arch nemesis the Joker.

His reign of terror has even extended to his wife.

In fact, Reynold’s trolling and games have also been aimed at his beautiful wife, Blake Lively.

Who he is constantly bad mouthing.

Reynolds often trolls his wife on social media, but has been known to also dirty her reputation on chat shows and during interviews. And even in the odd speech or two.

But it appears some celebrities had had enough.

But this year there appears to have been a scheme to finally get revenge on the Deadpool actor.

And you’ll never guess who did it.

And the prank was carried out by two familiar faces.

You’ll die when you find out.

One of whom Reynolds has worked with on multiple occasions.

Well one of the famous pranksters was Jake Gyllenhaal of Donnie Darko fame.

And the other one?

And Gyllenhaal’s partner in crime was none other than Wolverine himself.

Maybe it was payback?

This is doubly hilarious when you remember that Jackman and Reynolds both starred in X-Men Origins: Wolverine.

And that film was bad!

The film is now recognised as one of the worst films in the franchise and is often used as the butt of many of Reynold’s jokes.

Because it was the film where he first played Deadpool.

Reynolds often cites the movie in his Deadpool films because it was in X-Men Origins that he first played the character of Wade Wilson, also known as Deadpool.

But it wasn’t the Deadpool we all know and love.

But this Deadpool was a silent and engineered weapon, and not the character we all know and love from the comics.

So perhaps this was payback.

So perhaps this was Jackman finally getting payback for Reynolds always parodying his cinematic career as the clawed mutant.

So I bet you are now wondering what exactly happened between the three actors?

It appears that Jackman and Gyllenhaal were hosting a Christmas party.

Nothing too crazy, just a quiet evening at one of their Hollywood mansions.

But they told Reynolds something different.

However, the actors appear to have told Reynolds that the party had a particular dress code.

You can guess what happened next.

The actors’ told Reynolds that the evening would be a Christmas sweater party, obviously hoping he would arrive in something garish and festive.

And of course, Reynolds did. He arrived to the party wearing a Christmas present sweater, complete with bow and name tag. But he was the only one!

Of course Reynolds was the only one sporting a sweater.

In traditional prankster style, Reynolds arrived at the party and to his dismay realised that he was the only one wearing a Christmas sweater.

Reynold’s upset over the realisation was then beautifully captured on Instagram, with both Gyllenhaal and Jackman laughing at his side.

And the caption was hilarious.

Underneath the picture, Reynolds wrote ‘These fucking assholes said it was a sweater party.’

Jackman and Gyllenhaal we bow to you!

I’m sure we can all respect a good joke, well done guys!

But does this mean we’ll see a future pay back?

Although I bet Reynolds is already planning his next attack, so I’d watch out if I was those two.

But at least he looked festive.

However, Reynolds is actually rocking the sweater, and who doesn’t love ugly Christmas clothing?

Reynolds is also continuing in the festive mood.

Reynolds Christmas cheer doesn’t end there, especially with the upcoming release of his new Christmas movie Once Upon a Deadpool. Which will be a PG-13 edit of his film Deadpool 2.

So we’ll be seeing a lot more of Reynolds.

So we’ll be seeing a lot more of Reynolds during the festive season. Which isn’t a bad thing at all.

I’m sure we can all wish Reynolds and his family a Merry Christmas. And here’s hoping to seeing him get his revenge in the new year.