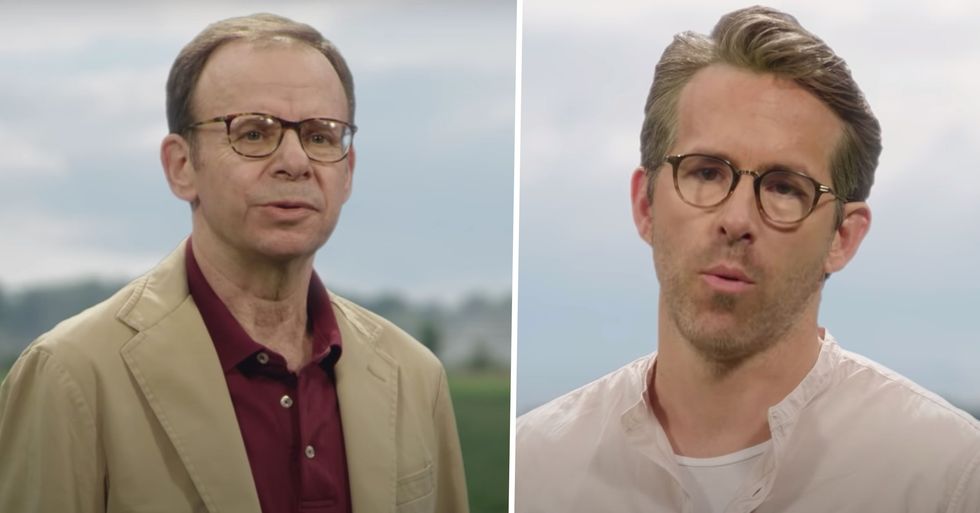 Keep on scrolling to see how...

And alongside being a kick-ass dad...

The actor is a prominent personality in Hollywood.

Alongside his hilarious relationship with Hugh Jackman...

Ryan is known for being a very likable guy amongst his famous peers.

And he's that likable...

He's managed to get a certain actor out of retirement for an exclusive time!

The actor recently shot a commercial for Mint Mobile...

He says: "It’s hard to believe Mint Mobile has gone so long without an unlimited plan. So, to introduce it, we brought in an actor we’ve all gone too long without..."

Rick Moranis, who is best known for his role in the timeless comedies Honey I Shrunk The Kids and Ghostbusters ...

And the sixty-seven-year-old actor has been on an acting hiatus for several years now.

Ryan explains to Rick that he simply needs to "advertise a phone"...

And Rick responds with, "Sounds good… I really gotta get a phone. So why am I here?".

At this point, Ryan admits that he’s a huge fan...

And Rick bashfully says, "Stop it!" before awkwardly walking off set with Ryan gazing after him.

It turns out that Ryan is actually as huge of a fan as he makes out.

As per Tech Crunch, the actor said: "Like many, I’ve missed seeing Rick in movies for the past decade, so I pretty much begged him to reemerge for Mint. There’s really no good reason for it, except this year has been weird and I thought we could all use more Rick Moranis."

And Author Preeti Chhibber retweeted it, writing: "Fine, I will retweet this ad but only because of the sheer joy of seeing Rick Moranis in something again, RYAN REYNOLDS. You win! (But also thank you for this gift.)."

Nick's return to the big screen marks his return to Hollywood for Shrunk, a sequel/reboot to Honey, I Shrunk the Kids.

@VancityReynolds @Mintmobile You’re really really making me want to switch to Mint in all honesty. These ads are amazing.
— Kyle Bardin (@Kyle Bardin)1599679577.0

So the iconic eighties actor is making a big come back!

You can watch the ad here:

And for more on the hilarious actor, keep scrolling to see his response to a burn victim who went as Deadpool for Cosplay...