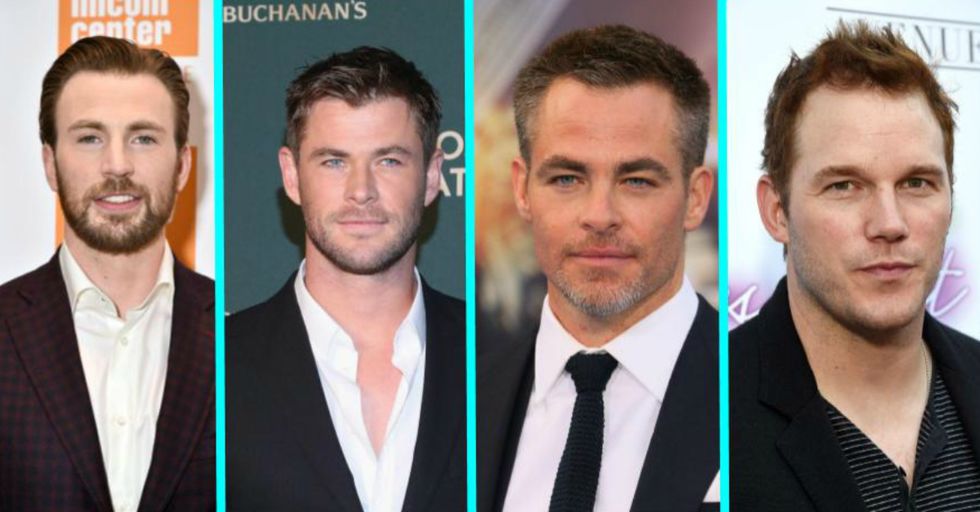 It's a question as old as time. Which Hollywood Chris is the best Chris?

For those of you unfamiliar with this query, allow us to explain. There are currently four – read 'em, four Chrises dominating Hollywood.

There's Chrises Evans, Pratt, Hemsworth and Pine. With such a plethora of Chrises – nay, an abundance of shortened Christophers (which is a Greek name, btw, that means "christ bearer") – it's confoundingly difficult to point out which Hollywood Chris is indeed the best Chris.

After all, Chris Hemsworth is ever so swoonworthy.

Those eyes, that beard... that accent. Even the way he donned glasses and played the cute secretary on Ghostbusters. In our eyes, Hemsworth is undoubtedly the hottest Chris.

But of course, there's Chris Pratt.

Who can forget his glow-up from schleppy sidekick in Parks and Rec to the scruffy, lovable hero of Guardians of the Galaxy. Of all the Chris's, Pratt in undeniably the most snuggly.

But then, there's Chris Evans.

Blue-eyed, blonde-haired, all American. (Okay, so maybe all the Chrises exhibit these traits... except for Hemsworth, who, while blond-and-blue-eyed, is not in fact American) Evans, we would argue, is the blondest and most blue-eyed of them all. The dude plays Captain America, and when he smiles, you swear his teeth sparkle. Evans is definitely a contender for best Hollywood Chris.

Just when you think the Chris train is in overdrive, Chris Pine steps into the mix.

Ah Chris Pine, those lovely, lovely eyes. Of all the Chrises, he's got that blue-steel stare down pat. When he looks at you with those baby blues, it's almost like he's seducing you, even when he's mid-fight, as he usually is in his role as Captain James T. Kirk. People sometimes sleep on Chris Pine, but we certainly never will.

This week, the dilemma of the Hollywood Chrises reached its height when one Twitter user reached out to the most unexpected person ever for an answer – Deadpool.

Sorry, did we say Deadpool? No, what we actually meant was Ryan Reynolds – another Hollywood figure with a very common name (although, the alliteration behind it is not so common).

It all started when Reynolds asked a very commonly-asked question on Twitter.

After all, this has been the year of Kardashian-Jenner pregnancies. One young Kardashian-Jenner even had to take to Twitter to defend her love of bagels against would-be pregnancy spotters who were sure she was the next of her clan to bite the dust due to her slight food baby. (C'mon, people, some of us enjoy carbs.)

It would have all been a very common Twitter exchange, had Twitter user @septicookies not thrown a curveball.

Right out of left field! Again, entire worlds are built around this question, and if you think we're exaggerating, see the Marvel universe, which has Asgard, New York city, and any other such exotic location the Chrises in their varied franchise getups are apt to frequent.

Reynolds took a moment to think on the matter, and then he came back with a surprisingly clever answer.

Gospel! After all, why have just one Chris, when you can have three Chris's. It's a virtual no-brainer!

But Reynolds wasn't done yet.

Because he certainly isn't sleeping on our darling Chris Pine. Although... the whole analogy with the pine nuts... and Deadpool is bisexual...

In any event, we're glad Deadpool – we mean, Ryan Reynolds – has answered the question once and for all.