Ryan Reynolds Perfectly Trolls the Kardashians With One Tweet | 22 Words 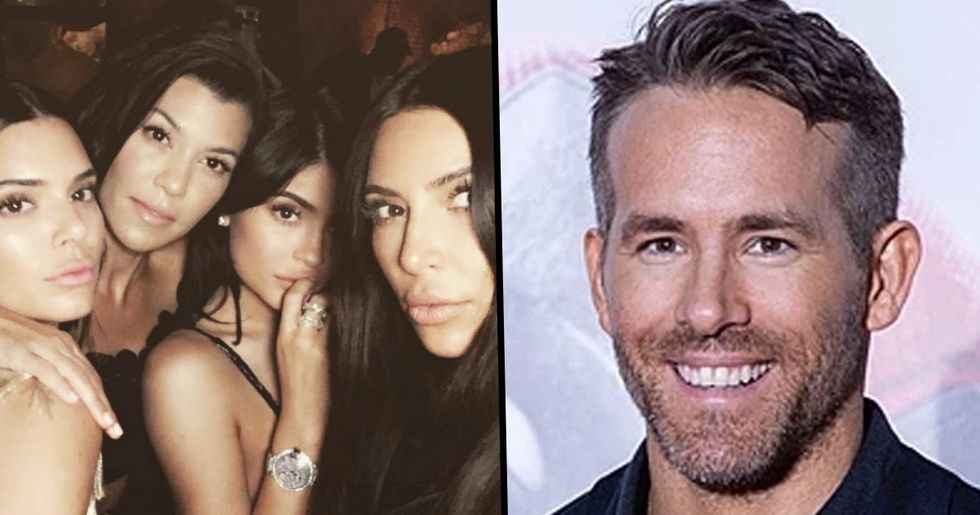 Ryan Reynolds Perfectly Trolls the Kardashians With One Tweet

The Kardashians have created an entire empire that about the entire world knows about. The Jenner/Kardashian clan is one of the most well-known family names, especially as each daughter has branched out on their own to create a brand to expand their empire even further.

Through scandals, pregnancies, marriages, divorces, gender changes, and everything in between, their names are constantly in entertainment news and sometimes even the real news. Some people are sick of it, while others, like Ryan Reynolds, always knows how to turn everything into a solid joke.

The actor and overall dreamboat with an incredible sense of humor posted a tweet about the Kardashians that had the Internet rolling and retweeting. It's the most honest, yet complicated, question to ask regarding the Kardashians and it's worth the read.

Over the past few years, the Kardashian family has multiplied, adding a few new uniquely named children to their family tree.

It's babies, galore over there.

And it can get a little confusing for anyone on the outside.

There have been some pregnancy rumors, surrogates, hidden pregnancies and cheating scandals amidst the already inherent Kardashian drama.

How can we keep up?

I mean, there's already a lot of babies under the Kardashian/Jenner family tree and with names that all start with K– plus various last names attached to the children –it can all be a little overwhelming.

Kris Jenner, AKA everyone's mom, is the grandmother to nine grandkids.

She's only 63 years old and is basically the matriarch of the Kardashians.

When Kris isn't managing her daughters or killing her Instagram game, she can be found making some pretty prestigious cameos, as she did in the "thank u, next" music video by Ariana Grande. She's honestly doing amazing, sweetie.

The ever-growing number of the Kardashians and Jenners is a lot to keep in order, and even Ryan Reynolds felt the need to voice his concerns.

I can‘t tell if my daughter’s smashing plates all over the kitchen floor or singing the theme song to Paw Patrol.
— Ryan Reynolds (@Ryan Reynolds)1545926522.0

If you follow Ryan's Twitter, @VancityReynolds, you already know he's hilarious but is also an activist who is passionate about climate change, voting and calling out idiots who say some stupid stuff online.

We love a man who votes

His tweets will inspire you and make you laugh. He's nearly perfect.

He speaks his mind.

Ryan really needed to get something off his chest and ask the question we've all been wondering this whole time, but were a little too afraid to share.

These are the questions that matter!

Finally. Someone had the courage to say what we've all been thinking!

Clearly, Ryan speaks for the majority of us.

Let's narrow down our options:

@VancityReynolds I think the easier question is which ones are not pregnant
— Donna Lezon (@Donna Lezon)1514938408.0

Replies were on the side of Reynolds, all trying to figure out this complex mystery.

@VancityReynolds @SOFFru1 So Deadpool, a Priest, and the Kardashians walk into a church...one argument and one marr… https://t.co/TfhywkmKn0
— Ben Collins (@Ben Collins)1514954458.0

People were loving this opportunity to execute some amazingly clever jokes, which I'm not mad about.

This is one cool priest if they are willing to discuss the Kardashians family. Even religious leaders are concerned with who's pregnant and who's not.

Another age-old argument worth discussing

One guy saw this as his moment to ask a very important question: which Chris does Ryan think is the hottest? Definitely a question worth asking, but difficult to answer.

Obviously, people are confused on the Kardashian/Jenner family tree and who's been pregnant lately.

I will do my best to answer these questions in a timely manner.

A lot can happen in one year

This past year, three Kardashian/Jenner babies were added to the family, all in classic Kardashian manner: drama filled and ready to air on national television.

Kim and Kanye welcomed their third child, Chicago, on January 15, 2018. The couple used a surrogate mother due to past pregnancy difficulties that Kim had experienced with her first two kids.

It's rumored that the surrogate received $45,000 from Kimye to have their baby. Her identity has been kept top secret, but I bet that's probably one of the coolest things that ever happened to her. I wonder if she gets invited to Kardashian parties?

North and Saint, their other two children, welcomed baby Chicago who completed their photogenic AF family.

Kylie Jenner and her boyfriend, rapper Travis Scott, welcomed Stormi in early February 2018 and shocked the whole Internet with their secret pregnancy.

There were a few rumors online that believed Kylie was pregnant, but no one really knew until she announced it on her Instagram and the Internet lost their minds. For nine months, a Jenner didn't share something instantly online with their followers. It was an absolute shock.

The cutest announcement ever

She shared this video with her followers, showing personal footage of her journey through pregnancy and how all her friends and family kept this secret so dang well.

Lots of drama for this mama

Everyone loved their relationship, especially when they released these adorable pregnancy photos. Dedicated fans of the show were crazy excited when Khloe announced her pregnancy because they all knew how badly she wanted to be a mother.

Better believe they caught it on camera

Here's the exact moment everyone found out Tristan cheated, just days before Khloe went into labor. It was tragic but it made for great reality TV.

The step-sisters, Kylie being 21 and Khloe being 34, shared quite a few moments while they were both pregnant.

Despite various drama and secrets, they loved that they both got to experience this season of their lives together.

Kourtney Kardashian, the oldest of the Kardashian sisters, has three children: Mason, Penelope and Reign.

Scott Disick is the father of all three children. Although Kourtney and Scott are not together and have both dated other people since their split, they are clearly making this "co-parenting" thing work.

No baby for Kendall

Kendall is actually the only Jenner/Kardashian sister that doesn't have a baby.

Except that one time people thought maybe she was

She posted this photo at the end of 2017 and some people thought she had a baby bump, and with the track record of this family, it was kind of believable.

She cleared that up real quick though

It's okay, Kendall, we all love bagels too. Food babies still deserve love.

Here's their year-end Christmas photo, showing all the beautiful mothers and their awesome kids. Two-year-old Dream Kardashian, Rob Kardashian's baby that he had with Blac Chyna, is also featured in this photo.

We hope this cleared up some confusion. We'd love to thank Ryan for being the brave soul and confessing, to his priest and to Twitter, that it really is hard to keep up with the Kardashians. Share this article to clear the air and spread the laughter.