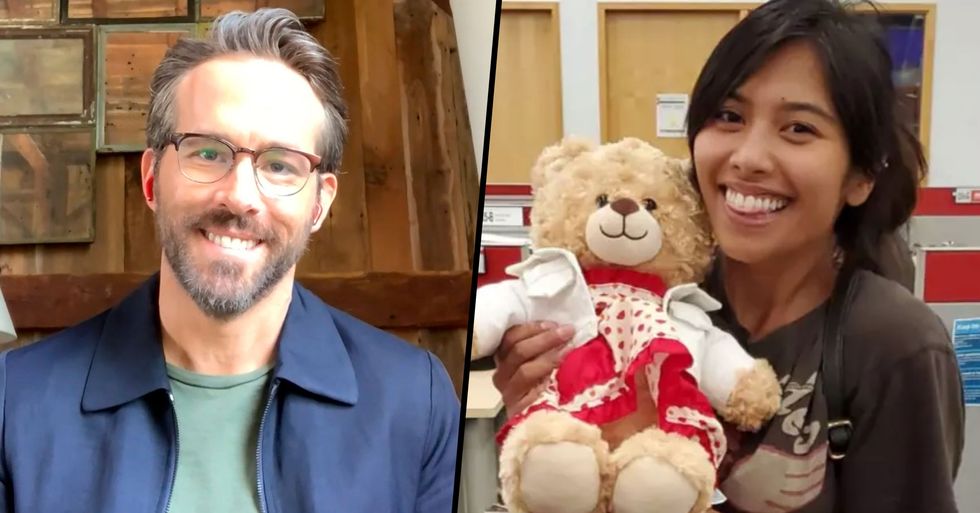 After a woman issued an online plea to help find her stolen teddy-bear, actor Ryan Reynolds stepped in. Now, it looks like there's been a heartwarming update...

Most of us can agree that Ryan Reynolds is one of the most beloved faces in Hollywood.

Don't worry, they are only jokes... I think.

We love your honesty, Ryan.

My daughter's only 6 months old and already drawing. I'd hang it on the fridge but honestly, it's absolute garbage.
— Ryan Reynolds (@Ryan Reynolds)1434717736.0

You'd be lying if you hadn't thought the same about your 6-month-old's art pieces.

And most of us will have had one of these moments...

Nothing better than spending an entire morning staring into my baby daughter's eyes, whispering, "I can't do this".
— Ryan Reynolds (@Ryan Reynolds)1440599049.0

A true voice for all exhausted, sleep-deprived parents out there.

But, all hilarious Tweets aside, Ryan knows more than anyone the importance of family...

And, this week, he has demonstrated this in the most beautiful of ways.

The actor extended a helping hand to a woman in need.

Twenty-eight-year-old Mara Soriano, from Vancouver, recently had her teddy bear stolen while she and her fiancé were unloading a U-Haul van in the city, and she was desperate to get it back.

A grown woman, appealing for a teddy bear? Seems a bit strange, right?

But it turns out that this stuffed toy holds with it a lot of sentimental value.

Soriano's mother, Marilyn Soriano, sadly died last year aged only fifty-three, and, shortly after she went into a hospice, her voice had been recorded and placed inside the custom-made teddy.

When squeezed, the teddy speaks in Maria's voice:

So, as you can see, this is no ordinary bear.

If you see this missing bear in the west end please email Deborah.Goble@cbc.ca It was in a herschel back pack when… https://t.co/lAvRKFmOLG
— Deborah Goble (@Deborah Goble)1595697985.0

News quickly spread about the stolen bear, and CBC reporter, Deborah Goble, shared a photo of the teddy on Twitter, writing: "If you see this missing bear in the west end please email Deborah.Goble@cbc.ca It was in a Herschel backpack when stolen along with an iPad. Mara, the owner says it has her mom’s voice inside saying, ‘I love you I’m proud of you, I’ll always be with you. Her mom died last year."

@CBCDeborahGoble I hope that whoever took this bear, some how hears how precious this bear is to Mara and returns i… https://t.co/N3tjcDjCqh
— gail briones (@gail briones)1595720124.0

And it didn't take long for the Vancouver-born Reynolds to get wind of the heartwrenching story.

Alongside a very generous reward for anyone who is able to locate the bear. He wrote: "Vancouver: $5,000 to anyone who returns this bear to Mara. Zero questions asked. I think we all need this bear to come home."

@elkandjackfish @VancityReynolds from the bottom of my heart, thank you for that kind message. I have been devastat… https://t.co/3ys40mLb38
— mara soriano (@mara soriano)1595723064.0

And, incredibly so, over 90,000 retweets. Mara expressed her gratitude, writing: "From the bottom of my heart, thank you for that kind message. I have been devastated since the theft and this message was so heartwarming. There is good in the world."

Thanks to the actor stepping in, the teddy has been found!

Everyone was elated that she has finally been reunited with the irreplaceable teddy.

2 good samaritans reportedly returned the bear to its rightful owner.

Mara looked visibly emotional as she reunited with the stuffed bear.

It's nice to get some uplifting news for a change.

We all need that bit of positivity right now.

For more on the generosity of the Reyonlds, keep scrolling to hear what he did for a local foodbank during the coronavirus pandemic...