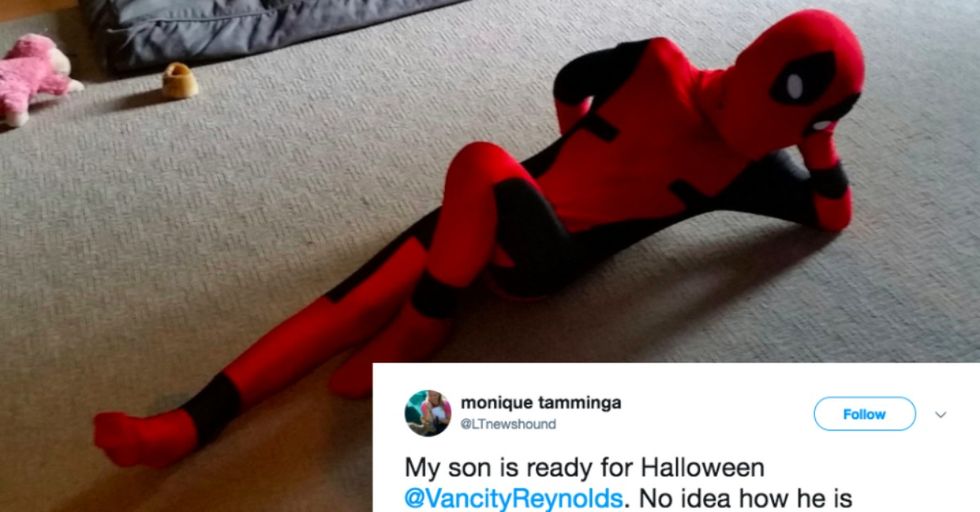 Ryan Reynolds is a legend of the Twittersphere, known for his quippy comebacks and his hilarious parenting tweets. Now, he's getting into the advice game, providing some words of wisdom for a mom who let her son dress as Deadpool for Halloween. Mom wasn't quite sure how her little boy was going to go to the bathroom in his costume, but Reynolds quickly piped up with some words of wisdom for the little guy.

Mom of a dapper Deadpool, Monique Tamminga, tagged Ryan Reynolds in a tweet asking how her son is supposed to go to the bathroom in his head-to-toe costume.

My son is ready for Halloween @VancityReynolds. No idea how he is supposed to use the washroom. Any tips Ryan?!! https://t.co/2Z6rEAIvNE
— monique tamminga (@monique tamminga)1509405797.0

A valid concern. That is one impenetrable suit. Tamminga was looking for Reynolds to shed some light on the subject of how his superhero self managed to relieve himself while dressed as Deadpool (assuming that superheroes go to the bathroom at all).

Reynolds clapped back with this disgusting and hilarious gem:

Everybody knows the Deadpool suit is also a toilet. Get it together. https://t.co/WBZUGaLFWt
— Ryan Reynolds (@Ryan Reynolds)1509445015.0

The Deadpool suit! Also a toilet! Um, no thanks?

We kind of can't believe he said that because now there's one heck of an awful image we can't get out of our heads.

I guess we should thank Ryan Reynolds for his "infinite wisdom" a.k.a. definite joke — wait, that was a joke, right? Now, if you'll go excuse us, we're going to go cut holes in the butts of all the Deadpool suits out there. No costume is worth the horror of also being a bathroom.