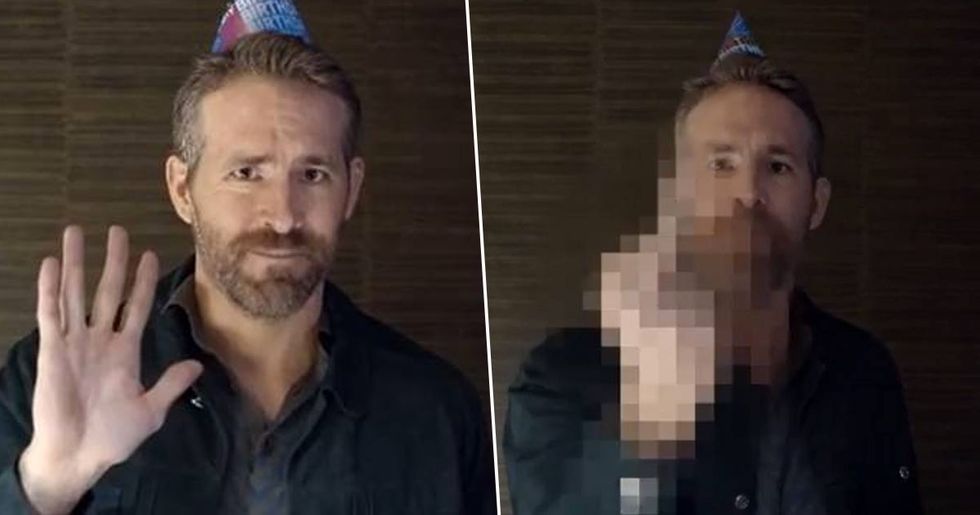 Ryan Reynolds and Hugh Jackman are two of the biggest stars in Hollywood today, and they actually have a lot in common. Both have acted in incredibly successful superhero franchises, playing fan-favorites Deadpool and Wolverine respectively. Both have led a some classic, heartwarming romantic comedies — but they’ve also proven their acting chops with a number of dramatic roles too.

Both Reynolds and Jackman were born outside the United States, they measure at a height of 6’2’’, and have been named People’s “Sexiest Man Alive.” Oh, and both of them are obsessed with roasting the heck out of each other on social media.

While the actors have been developing their unique friendship since they appeared alongside each other in X-Men Origins: Wolverine, their feud has also been slowly escalating over the last few years with the emergence of public pranking opportunities on social media - and NOW Reynolds has taken things to the next level with a savage attack on Jackman for his 51st birthday today.

Ryan Reynolds and Hugh Jackman have a longstanding feud.

They constantly roast each other the way only real buds can. It seems pretty fundamental to their friendship.

Happy birthday to the big HJ himself. I'm sure he's spent it doing something totally wholesome. But. There's a predicament here. As awesome as it must be having Ryan Reynolds as your best bud, How could you truly enjoy a birthday with friends like him? You know that somehow, someplace, he's going to roast you.

And then he did.

Posting to Instagram, Jackman shared the clip which Reynolds had inevitably sent to him personally... At the beginning of the clip, a clearly solemn Reynolds tells Jackman he just wanted to wish him a happy birthday, but now he feels hurt as a result of Jackman's insults at a live show recently.

Standing on stage, after finishing one of his classic songs, landing in his well-known Wolverine pose, Jackman said:

By the way, do not post that, I'll have like three million tweets from him in the next ten seconds.

Reynolds' birthday message was a response.

Or perhaps more retaliation/revenge attack than a mere response... He began by singing a LOVELY rendition of Happy Birthday To You, to Jackman. But then he took things to a new level when he roared:

And I'm not even f***ing professionally trained Jackman, you piece of s***.

His hand gestures were also a tad, ahem, erratic. But I'm pretty confident he wasn't make the peace sign.

But the good news?

It's Reynolds' birthday a little later this month. So we can be expecting some more of the back and forth roasting war that we've all became unbelievably fond of. I can't wait.