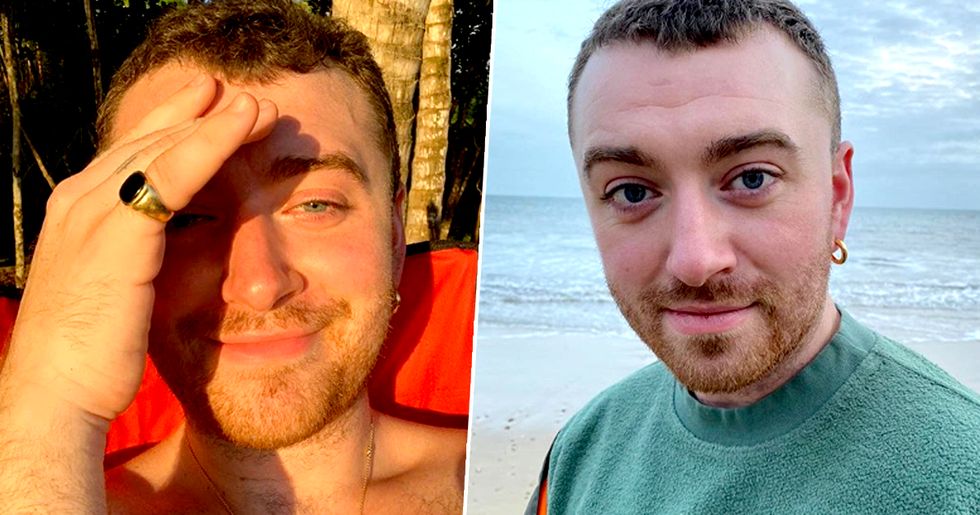 Sam Smith is one of Britain's most popular stars of the music world - they're also a huge Internet personality.

Last March, Smith, revealed that they were non-binary, and revealed a brand new look.

Now, Smith has spoken out about Valentine's Day, claiming they 'hate it' and find it 'offensive'...

And, back in March last year, Sam revealed that they now identify as non-binary.

As a child, Sam revealed that they were “chubby" and “carried extra estrogen" in their chest, making them self-conscious and more susceptible to bullies. “I had breasts," Smith said. “I used to get my mom to write a note to the school when I was like 8 so I wouldn’t have to go to swimming lessons. So it’s something that’s been in me forever."

Sam is working on loving their body.

And even shared a topless picture on their Instagram, along with the caption: "In the past, if I have ever done a photoshoot with so much as a t-shirt on, I have starved myself for weeks in advance and then picked and prodded at every picture and then normally taken the picture down. "Yesterday I decided to fight the f**k back. Reclaim my body and stop trying to change this chest and these hips and these curves that my mum and dad made and love so unconditionally."

Sam has been identifying as non-binary for nearly a year now.

Although, Sam revealed shortly after that they wish to use gender-neutral pronouns and wants others to use them when referring to them.

A source close to the star explained: "This is a decision Sam has thought long and hard about, including doing a lot of reading on up it. He knows that it will take some people longer than others to fully get it. "First the request is going out to mates and then it will be passed on to the music industry too. It’s an exciting and groundbreaking time for him."

It turns out that one of Sam's own songs was a key player in their transition to non-binary.

The popular bop helped the star come to terms with their identity.

In their interview with Billboard, Sam spoke about their smash hit single "Dancing With A Stranger."

"I had just gone through a breakup and the last thing I wanted to do was write a sad song," they explained.

Sam explained that the song "launched" them into a new space of "freedom."

“The song launched me into a really beautiful space of writing and freedom," Sam explained.

This was where the key moment for their transition came...

"There’s a femininity within that song that has ignited a flame within me. It triggered the transition I’ve made into a nonbinary person."

The star took to Instagram this week to reveal a new look.

And of course, fans flooded the comments with suggestions.

"Channeling Tracy Turnblad realness. They need to be in the next John Waters film," joked one user.

Sam is visibly happier than they ever have been before, so whether they identify as male, female, or neither, it doesn't matter. Their happiness is what counts.

But there's one thing they aren't happy with.

Valentine's Day. While most celebrate by going out for a fancy meal with their significant other, or chancing a date with a new interest, or hell, maybe even just getting a big ol' takeaway and watching a new movie, Sam Smith is NOT happy.

They claim it's offensive.

Smith compared Valentine's Day to a 'funeral' and even said they want to 'destroy it'... Jeez.

It's my twenty seventh year of being single on Valentine's Day. I'm over it. It's offensive. Yeah I'm sad today. Today's a sad day. It's more like a funeral.

And in another interview they added more.

Look I don't want to be a Debbie downer but this isn't my favorite day. I'm quite anti Valentine's Day.

I used to work in Clinton's cards, that's probably why I hate Valentine's Day.

You do you Sam. Mind you I just went out and had a few pints on my own while the girlfriend stayed in bed. I had a great night!