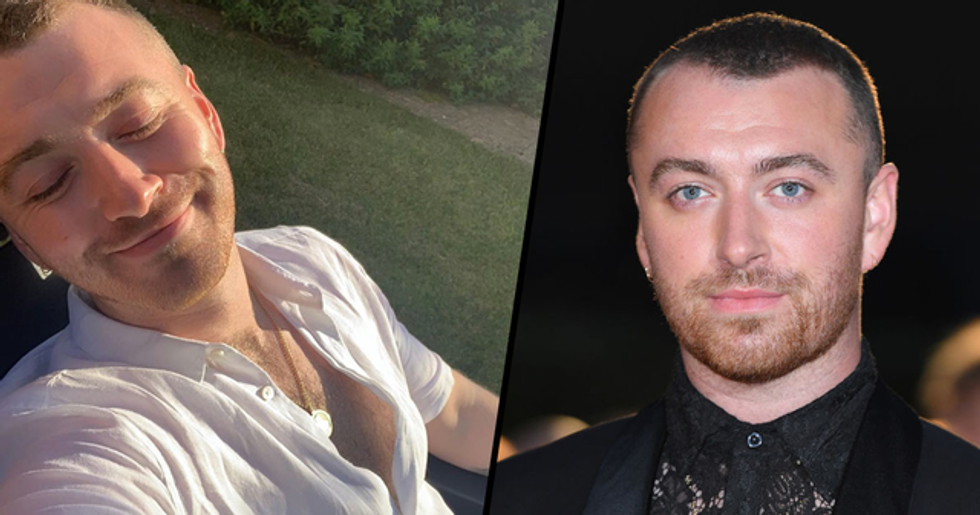 We live in an era wherein gender fluidity is becoming more discussed and, therefore, more accepted.

More and more people are coming out as "gender-fluid" or "non-binary," and the idea that a person doesn't need a set gender is becoming steadily more popular, with a growing number of influencers and celebrities coming out as non-binary themselves.

And, now, the latest celebrity to make the life-changing announcement is British pop star, Sam Smith.

Sam, who has always been openly gay, has now revealed their wishes to identify as non-binary and has even requested for their friends, family, and fans to refer to them as "they" rather than "he."

Keep scrolling to hear the full story, and to read Sam's official announcement.

In a candid interview with British GQ, Sam recently detailed their experience with sexuality, explaining how "not fitting in" can make them feel "really depressed and sad." The singer also recalled "violent and scary" experiences within the gay community shortly after moving to London, admitting that they were forced to have therapy to come to terms with the "traumatic" encounters.

And, 6 months ago, Sam revealed that they now identify as non-binary.

As a child, Smith revealed that they were “chubby" and “carried extra estrogen" in their chest, making them self-conscious and more susceptible to bullies. “I had breasts," Smith said. “I used to get my mom to write a note to the school when I was like 8 so I wouldn’t have to go to swimming lessons. So it’s something that’s been in me forever."

And they shared a topless picture on their Instagram, captioning it with: "In the past, if I have ever done a photoshoot with so much as a t-shirt on, I have starved myself for weeks in advance and then picked and prodded at every picture and then normally taken the picture down." "Yesterday I decided to fight the f**k back. Reclaim my body and stop trying to change this chest and these hips and these curves that my mum and dad made and love so unconditionally."

They had the realization after reading into the definition of "non-binary."

Sam explained: "When I saw the word non-binary, genderqueer, and I read into it, and I heard these people speaking, I was like, ‘F**k, that is me."

Sam has been identifying as non-binary for 6 months now.

And has continued using male pronouns like "he" and "him" for the meantime.

Sam has now revealed that they wish to use gender-neutral pronouns and wants others to use them when referring to them. So, instead of "he," "him," and "his," he wants to use "them," "they," and "their."

This revelation comes after Hits Radio presenter, James Barr, used the gender-neutral pronoun when tweeting about his interview with the singer.

Sam now wants everyone to refer to them using these pronouns.

A source close to the star explained: "This is a decision Sam has thought long and hard about, including doing a lot of reading on up it. He knows that it will take some people longer than others to fully get it." "First the request is going out to mates and then it will be passed on to the music industry too. It’s an exciting and groundbreaking time for him."

Sam is visibly happier than they ever has been before, so whether they identify as male, female, or neither, it doesn't matter. Their happiness is what counts.