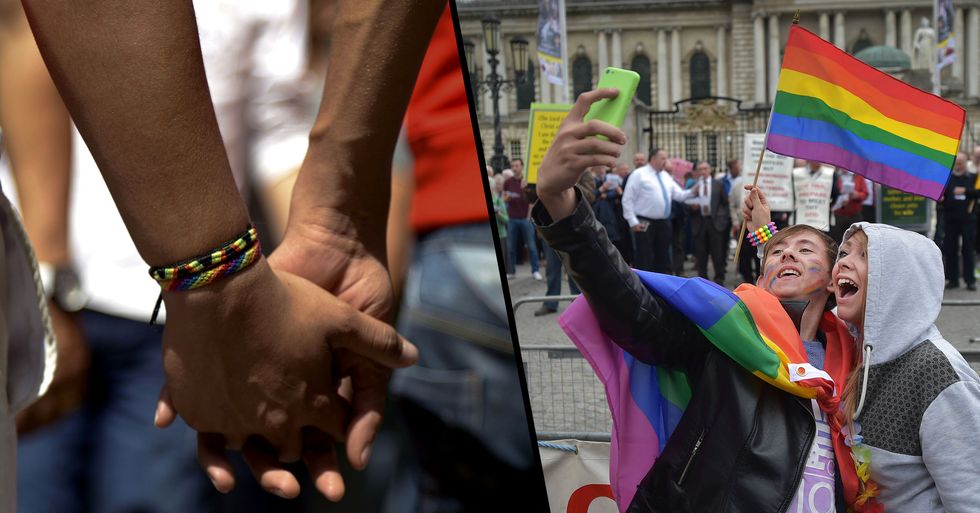 In a historic, victorious, and somewhat unexpected day for women and LGBTQ+ activists, both abortion and same-sex marriage have finally been decriminalized in Northern Ireland.

Northern Ireland has long remained opposed to the rest of the United Kingdom on both these issues, and for decades, people have been fighting for the rights over their own bodies and sexualities.

And, in a sudden U-turn move, MPs voted to upturn their archaic laws by legalizing abortion and same-sex marriage, therefore giving thousands of Irish people the rights they've been tirelessly fighting for the last few decades for.

Keep scrolling to find out exactly how we got there.

For decades, Northern Ireland has remained the only part of the United Kingdom to oppose abortion and same-sex marriage.

Under archaic laws that date back to the Offences Against the Person Act 1861, both abortion and same-sex marriage have long been considered as criminal acts in Northern Ireland.

Very much like the 'heartbeat' bill recently passed in Alabama...

Abortion has only ever been permitted when there is a risk to the life of the mother or a serious risk to her physical or mental health.

But why has Northern Ireland remained opposed to the rest of the U.K's stance on the matter?

The Abortion Act of 1967 legalized abortion on certain grounds in Great Britain, but this did not extend to Northern Ireland. Therefore, any changes in abortion laws for Northern Ireland had to be made there under their own legal system.

This law has resulted in thousands of women seeking illegal abortions elsewhere...

This meant that many desperate women resorted to traveling overseas in order to get a safe termination.

The rest of the U.K. has been offering to help these women...

Government plans in England offered to help Irish women with their travel costs to come and get safe terminations in their country.

But this played no role in changing Northern Ireland's archaic laws.

Because the rest of the U.K's stance on the matter has absolutely no influence on Irish law.

And this isn't the only issue Northern Ireland has been facing...

Northern Ireland has also been the only part of the United Kingdom that opposes same-sex marriage.

The Marriage (Same-Sex Couples) Act 2013, which allows same-sex marriage in England and Wales, was passed by the U.K. Parliament in July 2013 but, much like their abortion law, the bill didn't extend to Northern Ireland.

However, change has been sought after for years.

But now, Northern Ireland has finally being brought into line with the rest of the U.K. and the modern world...

As the country has now passed a bill that legalizes both abortion and same-sex marriage.

It was a landslide, yet sudden, victory.

The sudden change of heart in parliament came after an eleventh-hour attempt by the region’s assembly to block change completely collapsed.

And it lead to a historic day for the country.

Fortunately, both amendments were met with significant majorities.

“The beginning of a new era for Northern Ireland – one in which we’re free from oppressive laws that have policed our bodies and healthcare," said Grainne Teggart, Amnesty International’s Northern Ireland campaign manager.

And it was a huge day for the LQBTQ+ community, also.

We’re so proud to be surrounded by some of the people, couples and campaigners who have brought us to this point.… https://t.co/ImBwF9LqF8
— Love Equality NI (@Love Equality NI)1571662512.0

The sudden change in law means that thousands of couples can finally get married, and celebrate their love openly and legally.

The changes have already come into effect.

And Northern Ireland rejoiced as the chiming of the clock marked a momentous day for social change.

The changes have now come into force almost immediately...

For same-sex marriage, the new legislation puts the House of Commons has made sure marriage equality is now fully recognized by the legal system, paving the way for same-sex couples to wed from February 14th – Valentine’s Day. The abortion law obliges the U.K. to ensure regulations for free, legal and local abortion services are in place by March 31st, 2020.

However, not everyone is so pleased with the new law.

Pro-life groups have argued the changes have come into practice without anyone in Northern Ireland being able to vote in favor or against them. Some people urged the DUP (Democratic Unionist Party) to restore the devolved government by compromising on Irish language legislation in a desperate bid to block the updated abortion law.

The DUP fought tirelessly to make sure the bill wouldn't be passed.

Yeah sex is great and all but have you ever watched the DUP futilely begging to stop gay marriage and abortion beco… https://t.co/2upiUka9YP
— Zing Tsjeng (@Zing Tsjeng)1571731037.0

The party gained enough signatures for a recall of the Northern Ireland Assembly on Monday but, the party is unable to form a government without the support of a second party. And their leader, Arlene Foster, gave a commendable effort into stopping the bill... To no avail, of course.

And some people couldn't help but poke fun at the DUP...

Because there's nothing funnier than pro-lifers being cry babies, is there?

Today will go down in history.

Northern Ireland is the most recent country to take a step in the right direction for women's and LGBTQ+ rights... Let's hope everyone else follows through. Even though this has been a momentous occasion, there is still a stigma surrounding the overall concept of same-sex marriage. Keep scrolling to see just how impactful the opposition really is...