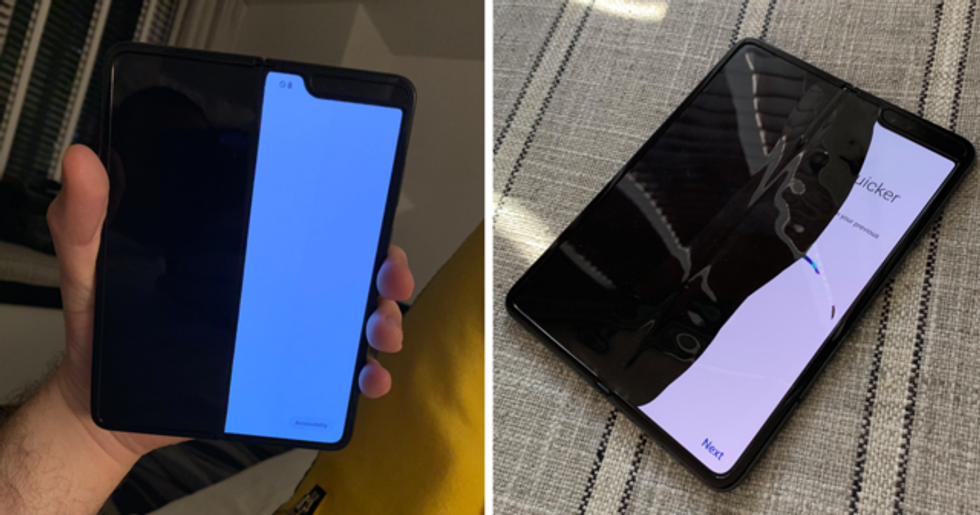 Ever spent a ton of money on something that was quickly revealed to be a huge mistake? There's really no worse feeling than knowing that you've essentially thrown your hard earned cash straight out the window. And it's even worse if you end up without one of modern life's most necessary gadgets, to boot.

Such was the experience of a select few that had purchased a horrifically expensive phone this week before watching it fall apart before their very eyes. The new Samsung Galaxy Fold was released to huge fanfare, thanks to its innovative folding screen - and it came with a similarly impressive price tag.

But those who did spring for the newest phone on the market seem to have been left bitterly disappointed. Many are reporting massive technical failures with their new gadgets - and they have the photographic evidence to prove it. Want to see what we mean? Scroll down to see!

There's nothing wrong with spending a little cash.

After all, if you're working hard, then it's nice to be able to treat yourself.

But throwing money away?

Now that's just annoying. Not only does it make you irritated with your own decisions, but you often end up being constantly reminded of what you could have spent the cash on.

One of the biggest culprits?

Products that break far too easily. It's one thing if an old item becomes worn out and gives up - but it's quite another if a brand new product just isn't up to scratch.

It's just so irritating.

It feels like a huge corporation has spent their time and energy trying to trick you, the consumer - and the worst part is, you've fallen for it!

But what if that item is something you really do need.

Like, for example, a mobile phone. Can you imagine trying to function in today's society without this invaluable piece of equipment?

The problem is, they can be liable to problems.

And there's little more annoying in life than a broken mobile phone - especially if you don't have an alternative.

It was first founded a whopping eighty-one years ago, in 1938 - and it's safe to say, its products have come a long way since then.

But perhaps its biggest market area is that of the mobile phone. The Samsung Galaxy range of cell phones first launched in 2009.

Since then, they've been pretty creative.

Their latest innovation? A phone with a screen that can bend in two! The Samsung Galaxy Fold was first unveiled earlier this year.

And, at first, people were excited.

It's always interesting to see how new technology can make an impact on our everyday lives. Plus, with crazy things like folding screens seeming a reality, it really feels like we're living in the future!

But it wasn't the triumph that Samsung had hoped for.

In fact, so far, the Galaxy Fold seems to be experiencing huge technical issues - and people are not pleased.

The phone has not yet been released to the public.

Those that have received the phone so far have only had press samples, as gifts from the company.

Some think that they've gotten to the bottom of the issues.

The folding screen reportedly comes with a thin plastic layer, which many took to be a peel-off protective film - but this actually isn't the case.

Turns out, it needs to be kept in place.

Samsung has released a statement, saying: "The main display on the Galaxy Fold features a top protective layer, which is part of the display structure designed to protect the screen from unintended scratches. Removing the protective layer or adding adhesives to the main display may cause damage. We will ensure this information is clearly delivered to our customers."

But people are still frustrated with the cell phone.

For one thing, it costs upwards of $2,000 - which seems a lot to spend on something that can break so easily!

At first, people were pretty excited about this innovation.

After all, a folding screen seems almost like something from a sci-fi film - and it looked super fun to play with.

But, quickly, it became apparent that this wasn't quite the reality.

The screen on my Galaxy Fold review unit is completely broken and unusable just two days in. Hard to know if this i… https://t.co/tvECygQgFN
— Mark Gurman (@Mark Gurman)1555523909.0

A huge amount of users trying to enjoy the new Galaxy Fold were facing issues with the product.

It seems that the screen just isn't durable.

Many have reported that since removing the film, the device started to behave very strangely, eventually becoming totally unresponsive.

He claims that he also had issues with the basic functions of his Samsung Galaxy Fold after removing the film layer.

It seems that the screen is poorly fitting.

On top of any software malfunctions caused by the folding motion, it also seems that the screen ends up warping and coming loose.

The crease in the folded screen only becomes more apparent with each use - which isn't ideal for a cell phone, which gets more than its fair share of use.

At first, it seemed that the screen removal is to blame.

But this tech reporter for The Verge claims he left his intact and has still managed to come up against huge tech failures.

There's another problem, too.

Some have faced issues with the hinge mechanism of the Galaxy Fold, claiming that it doesn't operate smoothly and seems poorly constructed.

Across the board, it seems like this phone is facing big issues.

In fact, finding a positive word said about the Samsung Galaxy Fold is a pretty difficult task.

Though some are inclined to blame the user.

But even if the screen removal is what's causing the phone to break, why can this $2,000 device be so easily dismantled with a user's bare hands?

One tech reporter stood up for the phone.

Some have found the situation pretty funny.

The internet has been quick to make some jokes about some of Samsung's rival companies, who are likely thrilled to watch the mess unfold.

Some have found the whole situation ridiculous.

And it seems even more so when you consider the fact that Samsung have had big issues with a past phone launch - the Galaxy Note 7, which had batteries that could potentially catch fire.

Some have made up some imaginative slogans for Apple.

It seems like they barely have to compete, though, if their only rival is a phone that immediately falls apart.

But some are looking on the bright side.

The broken screen could be seen as an exciting extra feature of the device, making it the perfect phone to take along to the club! What do you think about all this?