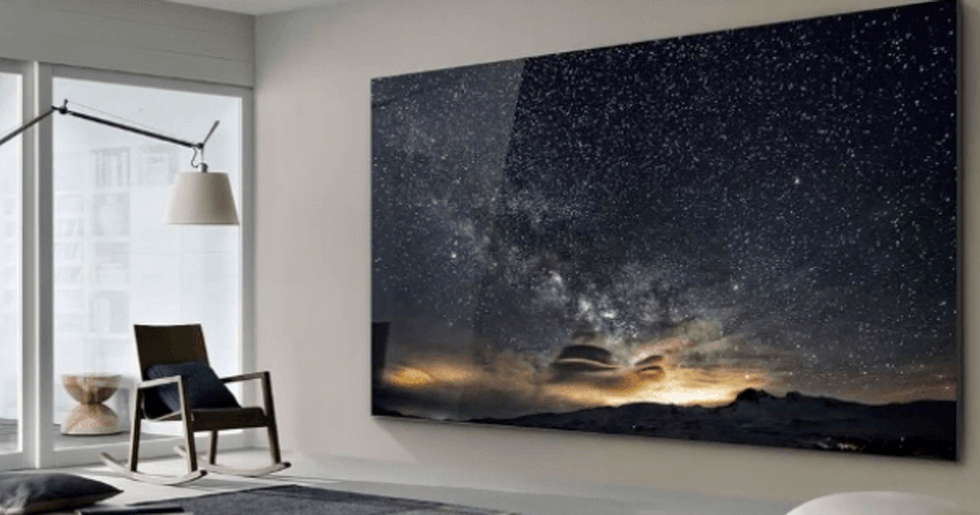 Samsung have just released their latest TV at the CES. At a size of 219 inches, it's a monster. It is called The Wall, and that is an incredibly accurate name. It can take the form of a big painting on your wall, or even just blend in with the wall behind it.

Not only is it huge, but it can also work in a modular format, so you can put several together. It is hard to know who would ever have a space big enough to watch something on this TV. But one thing's for sure, it would definitely be a game changer for Netflix and Chill.

The Wall is the new release by Samsung.

This new TV by Samsung uses micro LED technology to produce colours at the next level. As well as being a TV, it can also be a wall feature, which is lucky as it is so big.

So how big is The Wall?

This new TV by Samsung is actually bigger than the biggest king-size bed. A king-size bed is just under 7 feet by 7 feet. In contrast, The Wall is 15 feet by 9 feet.

It's bigger than an elephant.

That's right. The Wall is actually bigger than an elephant. African elephants are 8 feet tall, and this TV is 9 feet tall. At 15 feet long it is the same length as an elephant too. It would definitely be hard to ignore this elephant in the room.

What is the CES?

The CES is the Consumer Electronics Show which is held each year in Las Vegas. It was first held in New York back in 1967. That year they were very excited to exhibit the first pocket radios.

The wonders of the VCR.

In 1970 Phillips unveiled a videocassette recorder (VCR) that you could actually have in your home. Before this they used to be over $50,000! We'd have never been able to record our favourite shows at that sort of cost.

Bill was hit with the blue screen of death.

Back in 2005 Samsung was already enjoying showing off large televisions, as it promoted its new 102 inch plasma TV. These days that's barely worth mentioning. It is still funny that Bill Gates demonstrated the new Windows Media Centre and ended up with an error screen.

In 2014 Audi showcased laser diodes, which will be used as high-beam headlights. Their light can shine on a distance up to 500m away, and they are more energy efficient. Unsurprisingly though, lasers are more expensive, so it's taking a while to get them out into regular cars.

Usually it looks just like a regular phone case. You might not want a clear one, thinking it would show how grubby your phone really gets, but this one is different. It allows you to watch 3D content, play 3D games and take 3D photos. All you have to do is put the case over your screen instead, and then you can start enjoying the 3D fun, almost like being in the real world.

Last year Samsung released their first version of The Wall.

The Wall point one was 146 inches and, crucially, without bezels. For people not in the know, the bezel is the edge of the screen. The Wall point one was based on cinema screen technology designed for movie theatres. Standing at 10 feet wide, 6 feet tall, it's longer than Reese Witherspoon and Ellen Page together, and taller than Tom Hanks.

The Wall is modular and can be put together like a jigsaw.

Similarly to the first one, of the key features of The Wall point two is that you can customise it. There is a variety of shapes and sizes and you can piece them together like a jigsaw.  You can even make it into a pattern if you prefer, so that it looks more like a wall hanging. Although it would be annoying for watching a football game though if any action took place in a corner. Maybe a good old-fashioned square would work better.

The aim of The Wall is to blend in, apparently.

Despite the enormity of the screen size, The Wall is actually very thin. It can blend in with your regular surroundings to match the interior. It could even look like a regular picture, albeit a very large one.

Samsung are very proud that The Wall can show a colour that is a pure black.

With twice the colour output of a regular LED TV, The Wall is able to show colours in a whole new way. Samsung reckon that this is the step needed to show a pure black and true colours. And it claims to have ultra-low reflection black technology. This means that we could watch dark scenes on our TVs without just seeing our own reflections.

The question is how best to utilise The Wall.

The innovators at Samsung are thinking of the big picture; a screen of 219 inches, or multiple screens of that size, could be used for some very exciting displays and exhibitions in museums and galleries. We are thinking it is the perfect size TV to catch-up on Game of Thrones before the new series is out (just one episode each day from now and you'll be caught up in time!)

The new Wall TV is more efficient than regular TVs.

The Wall uses different technology to most televisions. It uses OLED, or Organic Light Emitting Diodes. These pixels light up individually, so the light doesn't need to hit every pixel. This makes it better for power consumption and picture quality.

And then there is their other design, The Window.

This is the consumer-friendly version of The Wall. At 75 inches, it is still huge, but it is definitely more manageable in a regular (large) living room. It is an Ultra-HD TV with 4K, so you can get the highest quality pictures, and stay sat on your sofa.

The Window wants to produce the best picture quality possible.

In order to make The Window's incredibly high resolution, it has 25 million tiny LEDs. To put this into context, if the LED lights were people, The Window would have the same population as Australia. In contrast, a regular TV would have around 1500 lights. Or a very well-lit Christmas tree might use 500 LED lights.

Wait, where did it go?

Ok so we know that sometimes TVs can look a bit ugly in the place of a roaring fireplace, but Samsung have taken it to the next level with this TV. It is invisible! That's right, this TV is meant to blend in anywhere. Most people will just set a nice picture so it looks like a wall hanging, but if you prefer, you can make it so that you can barely see it at all. We are definitely living in the future now!

Imagine if you actually had an invisible TV...

It would be super cool to have an invisible TV. We bet that you could play loads of cool pranks on people. You could invite people around to watch something and then just put your old laptop out. They would be so disappointed until you switched The Window on and it flashed into action out of nowhere.

And imagine if you owned The Wall...

Most people I know don't even have a wall big enough for The Wall, so I think even if it was disguised as a painting, it would look out of place. But it would be super cool to watch new film releases on it, or to watch the Super Bowl, or Planet Earth, or anything really…

How about a quick computer game?

Gaming might be the one thing The Wall can't handle.

A screen the size of The Wall would actually be detrimental for serious gamers. It would be impossible to sit in a regular size room and keep track of what's going on across the screen. You'd have to sit so far away to see everything that you would be better off just playing on a regular screen.

It's crazy when you think how far we've come.

These days most people sit back and watch the magic box of moving pictures at the end of the day. A lot of people watch it with their breakfast and at other points in the day too. We've got so used to it that it's easy to forget that not that long ago, there was a life without television.

There was a different life before TVs arrived.

Back in the day of our grandparents, children grew up playing rather than watching. They would play outside whenever they could, or if it was really bad weather then they might play cards or board-games. They would certainly struggle to sit down.

Televisions arrived and were able to broadcast live events.

The television really took off in the UK with the coronation of Queen Elizabeth II in 1953. 27 million people tuned in to see the Queen, and many people went out to buy televisions specially. Although channels didn't start to regular broadcasts until a couple of years later.

The television quickly became a staple item in every home.

With classics like M*A*S*H, Cheers and The Brady Bunch being watched in all households.

By the time the millennium hit, it was hard to imagine life without it.

TVs could show everything, whether you wanted to watch Saved by the Bell or The Simpsons after school. Or maybe you were more into Friends and Sex and the City. There was something for everyone.

And if you were into music, the TV was still the answer.

The television changed the face of music as music videos took off as a platform for artist promotion. Plus you could watch all your favourite bands perform live on Top of the Pops.

With the arrival of Netflix and Amazon Video, television definitely seems to have changed forever. Now we can watch anything, anytime. And binge-watching a series has brought a whole new level of enjoyment to TV shows.

And they're not quite the same box shape that they used to be.

For decades, televisions have been a standard box shape. But these days that's not necessarily the case. Curved TVs are now commonplace, providing a more immersive experience and making it all seem 3-D.

But nothing can compete with The Wall.

It's true that televisions are far better than they used to be. They're sleek, they're clear and they can let you feel truly sucked into a show. But they can barely even be compared with the behemoth that is Samsung's new, 219 inch TV, The Wall. I just hope one day I get to watch one.