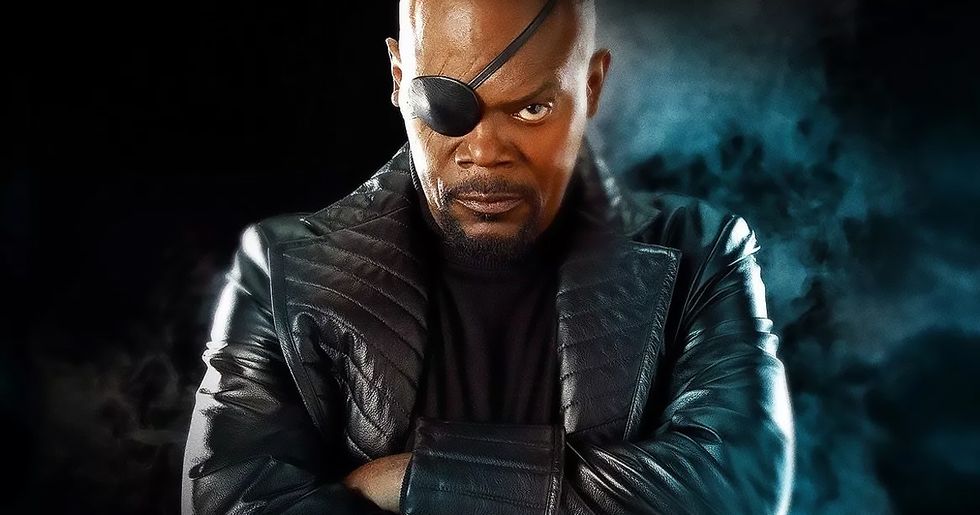 Do we honestly need advertisements for Marvel movies? I literally don't remember the last time I heard a Marvel movie was announced, but I'm somehow always there on opening night. It's like salmon knowing how to get to the place they were born when it's time to spawn — we've just always had the release dates of Marvel movies buried somewhere deep in our brains.

And yet, every massive blockbuster must bring with it an advertising campaign, and that means posters, commercials, and, yes, billboards. That has to be stressful for the marketing team, making massive pieces of art that'll be seen by an entire city at once. What if they screw up?

Well, that's what happened to the Spider-Man: Far From Home team. They made a massive blunder that will surely be noticed by comic book fans — notoriously the most hard-to-please strand of fan. And to make things worse, their boner's been noticed by the very same star whose face they mucked up — Samuel L. Jackson.

Recently, Marvel wrapped up its 11 year-long saga with Avengers: Endgame

In what has to be a first for the movie industry, a 22 movie-long series came to a wildly satisfying close. Avengers: Endgame brought the stories of Captain America, Iron Man, Thor, and the other core Avengers to a satisfying close.

But next month brings us Spider-Man: Far From Home.

Marvel movies come in phases, and while Endgame was the climax of Marvel's third phase, it was not the end. Officially, Spider-Man: Far From Home will be the final movie — a breezy, refreshing grace note featuring the series' most affable and light-hearted character. Granted, this "breezy, refreshing little grace note" will feature said affable and light-hearted character in constant danger of being killed by alt-universe monsters, but once you murder half the galaxy, anything will seem light and refreshing.

The movie finds Spider-Man traveling to Europe with his buds.

Peter Parker is taking a much-needed vacation after five years of being dust. He and his buddy Ned are going on a class trip to Europe, where there will do nothing but have fun and learn about a local culture! Hooray!

But actually Europe is full of alternate universe monsters.

In the movie, Peter Parker is recruited by Nick Fury.

Nick Fury, leader of the Avengers, travels to Europe to find Peter Parker, since it sounds like the rest of the Avengers are all busy. Hopefully Nick Fury is tactful enough not to tell Peter that he called all the other girls and he's the only date he could find.

Played by Samuel L. Jackson, Nick Fury's been around since the original Iron Man.

In what was the very first hint that Marvel movies were doing something big, Nick Fury appeared in the post-credits sequence of 2008's Iron Man and told Tony Stark about "the Avengers initiative." Tony was all "huh?" Were we ever so young?

And he's always worn his signature item: his eye-patch.

In a world full of superheroes, Nick Fury is just a regular man. But the one advantage he does have, is knowledge. And that superpower is symbolized by the mystery of his eye — how was it damaged? Like seemingly all other pieces of information in the Marvel universe, Nick Fury knows, and we don't.

Captain Marvel showed us how he lost the eye, and it was when a cute kitty cat gave him a widdle scwatch! (Said cute kitty cat was a powerful alien beast in disguise, but it still a far more adorable story than we were guessing.)

You can imagine the surprise, then, when these Far From Home billboards popped up:

As part of the marketing for Far From Home, these billboards show Nick Fury with a patch over his right eye. His right! That's totally insane, because I don't know if you know this or not, but Nick Fury's left eye was damaged.

The implication is terrible.

If this were canonical, we'd have to believe Nick Fury was faking his eye injury, perhaps to gain sympathy. And I don't know, he just doesn't strike me as the type! Maybe he'd fake a leg injury so people would open doors for him. Maybe.

And when word got to Samuel L. Jackson himself...

Someone tweeted at the man himself, Samuel L. Jackson, and, well, he did not take it well! Samuel L. Jackson went to Instagram and declared that, much like Thanos at the beginning of Endgame, this mistake means heads are going to roll.

Of all the Spider-Man: Far From Home stars to piss off, why did it have to be Samuel L. Jackson?

Of all the cast, Samuel L. Jackson is the one who, let's say, deals with anger the worst. I'm not saying he literally shouts bible verses at those who piss him off, but there is no way he's not constantly dropping "motherf*ckers."

Someone get Tom Holland mad!

That poor, sweet little guy needs a little anger in his life! I bet he'd turn in some Academy Award-level performances if he could toss in a dash of rage with his "golly gee shucks"-sort of vibe.

Now, Samuel L. Jackson could be legitimately angry about this.

This is a huge mistake, and it really is embarrassing for Marvel. And when it's your literal face on a mistake, sure, I could see taking it personally.

He is one of those die-hard comic book nerds himself.

But comic book nerds get a different kind of angry about continuity mistakes. They took the time to memorize all the different timelines and universes and superpowers of hundreds of characters — why couldn't the people actually making these characters do the same? And Samuel L. Jackson is one of those nerds.

And here's how we know: the comics' version of Nick Fury used to be white.

When he originally appeared in the comics, Nick Fury was one of the many, many, many white guys in the Marvel universe. In fact, in his first movie appearance, Nick Fury was played by David Hasselhoff (who is, in fact, the whitest man).

But in 2012, Marvel launched its Infinites line of comics.

A reboot of sorts, the Ultimate line took all the coolest moments in Marvel's long history and tweaked them just enough to make them palatable. For instance, Venom was built in a lab to cure cancer by Peter Parker's dad, instead of being a weird space slime that came from space. You see? Palatable.

And one of the biggest changes in the Ultimates line is that Nick Fury was redesigned to look like Samuel L. Jackson. Of course, Samuel L. Jackson was reading those comics, and when he saw his face in the pages, he gave Marvel a call.

And that's how he was promised the role of Nick Fury, should Marvel ever start making movies.

This almost feels like one of those Hollywood urban legends, but apparently, so as to discourage him from taking legal action, Samuel L. Jackson was promised the role of Nick Fury should Marvel ever make a movie version of the character. (Personally, I think he would've been offered the role anyway, and he would have taken it without hesitation, and that this story was circulated to add to his badass reputation.)

So yes, I do believe that Samuel L. Jackson was in his room looking at these adverts and seething.

Having played him for over 11 years now, it does seem like Samuel L. Jackson has legit affection for the character and is enjoying himself in these movies. So yeah, I could see him being legit pissed about the eye-patch switch.

But still, it feels like there's something else going on.

Now, I know I just admitted to believing Marvel was circulating the story of begging Sam Jackson to take the Nick Fury role so he wouldn't sue, so maybe I'm thinking a little too conspiratorially, but I think there might be more to this eye-patch story than a simple mistake.

Is Samuel L. Jackson really the type to throw someone under the bus?

If I'm Samuel L. Jackson, do I really want some low-level graphic design intern getting fired over this? That feels mean. And he has to know that tweeting about it will bring attention to it, ensuring that whoever made the flub would be punished for it.

So is he trying to draw attention to the eye-switch?

Maybe, after we've all seen Far From Home, we'll look back at this whole "accidental" eye-swap and realize that Samuel L. Jackson — and maybe Marvel itself — was hinting at something. But what could they be hinting at? Strap in for a fan theory, folks.

The Spider-Man: Far From Home villain is Mysterio.

Mysterio's whole deal is using "magic" (read: advanced holographic illusions) to trick people and then, I don't know, commit crimes while they're distracted? He is a very silly character. (Officially, I felt a little bad writing that, because I don't want to spoil Far From Home for those who don't know Spider-Man's history extensively, but then I was like, nah, I don't think that's a spoiler. It's like saying "The Lizard's whole deal is that he is a lizard.")

Could Nick Fury's entire appearance in the film be an illusion?

What if Nick Fury isn't in Spider-Man: Far From Home at all? What if Mysterio's just conjured up a fake Fury to get Spider-Man where he needs to be?

Maybe this billboard is a hint to how Spider-Man will figure out Mysterio's true nature?

On one hand, probably a bad Photoshop. On the other hand, I specifically remember a cartoon where a certain Spider… https://t.co/Wh8jqyuSi1
— Nando (@Nando)1561150866.0

It sounds like there is canonical precedence, and plus, what a cool, clever way for Marvel to let viewers know they were playing fair? We fans could go back and watch it a second time, and see that left-eye-patch Fury was the real Fury, and right-eye-patch Fury was a lie.

It's important to remember that, in a lot of his depictions, Mysterio is very, very dumb and bad.

In the Spider-Man 2 video game, Spider-Man has to do battle with Mysterio, and he just clocks him. One punch and he's out. It's almost strange that Mysterio is the main villain of a Spider-Man film, because he's been treated as such a joke over the years.

So if the Jake Gyllenhaal version of the character is just as dumb...

And while I don't want to be too mean to Mr. Gyllenhaal here, I do think his casting suggests that yes, Mysterio will continue to be dumb and bad.

... I could easily see him forgetting which eye he put the patch on.

Here we see Mysterio shooting out two laser blasts, so look for this moment next week when you watch Spider-Man: Far From Home. Don't be surprised if it's actually Mysterio shooting eye-patches onto both the eyes of his fake Nick Fury, just to cover his bases.