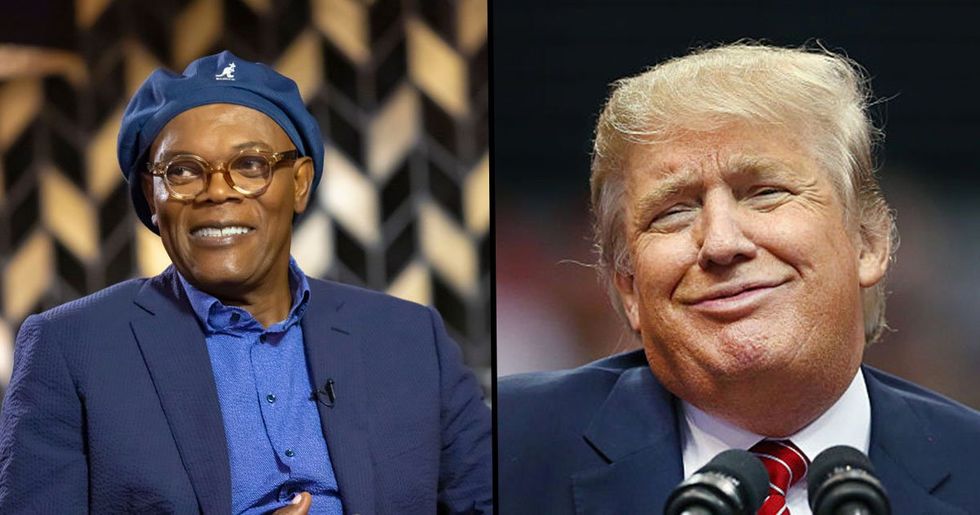 Samuel L. Jackson Taunts Fans Who Threaten to Boycott His Movies If He Keeps Slamming Trump

Politics has always been a topic that most people avoid in conversations. Some individuals can get pretty passionate about it, so it becomes a tricky situation to get out of once you're knee-deep. And if you're someone with a massive fanbase, it becomes a whole other situation. Who wants a bunch of politically-crazed "fans" sending you abuse? I think I'll pass.

However, it seems as if Samuel L. Jackson is not bothered by any of the backlash. He's taking the concept of "being vocal" to a whole new level by taunting Trump fans who have threatened to boycott his movies if he keeps openly slamming the president.

Keep reading to see the hilarious response that he had to Trump's most loyal followers...

It's no secret that Samuel L. Jackson hates President Trump.

He has made sure that his voice is heard when it comes to calling out the President of the United States.

Earlier this year, this is what the big-name actor had to say about him...

In an interview with Esquire, Jackson discussed his political standing when it came to the leader of the free world.

Growing up during the times in which "real" segregation was a prominent aspect of society made him realize the dangers of having a man like Trump sat in the Oval office.

In the interview, he talked about how he felt during those times.

After outlining the fact that he only interacted with white people when he went to work for his grandpa, he tells us about how "normal" it was back then to have black and white towns with separate cinemas and institutes for certain colors.

The seventy-year-old actor recalls the times when he got his grandpa into trouble because he was a "stare-at-white-people dude." But it was always brushed off with the excuse: "Yeah, this boy got a little backbone." He then says: "The only other time I saw white people was when I went to town."

"Did it make you feel angry?"

Jackson mentions that he was never angry about it back then because it was considered the norm. But now, he's much angrier, because he can see all of the similarities between the leaders that ruled then and the ones that we have now. And not just in the United States.

Reading that scared me too.

From hearing someone who lived in both times, who can truly compare the two, isn't it frightening to know that history may be on the brink of repeating itself? Or are we blind to that because it all feels normal now, as Jackson revealed it was back then?

He called out Trump for being an "assh*le" in the same response...

He said: "There was no doubt about where they stood, that you were never going to be their equal and, if possible, they were going to make sure you never had as much sh*t as they had." And he can see those same qualities in the president.

The interviewer asked him a few more political questions, which ultimately revolved around Trump.

I knew that it was going to get interesting when he asked the actor about why he was so vocal about his political opinions, but, judging by his previous responses, and his stories about his childhood and growing up during segregated times, I knew that it wasn't going to be all rainbows and flowers, like his career is always made out to be.

If there's one thing he can do, it's use the word "m*therf*cker" in the appropriate context.

Samuel L. Jackson isn't one to filter his opinions and that's why everyone, besides Trump fans, adores him so much.

The actor was met with intense backlash from white people who love telling black people how they should be feeling, but he had the perfect response to the haters.

Trump fans can't stand it when people insult their tyrant of a leader.

And it seems as if they especially hate it when a successful black man comes for him.

But, to Sam, it's not about his career. This is what he had to say: "If you're not saying anything, then you're complicit. And I wouldn't give a f*ck if I was a garbageman and I had a Twitter account, I'd tweet that sh*t out," the actor continued. "I'm not thinking about who I am and what my job is when I do that sh*t."

He was also asked whether being vocal about politics could jeopardize his career... but he didn't care.

He's Samuel L. Jackson, for crying out loud. That man can say whatever he needs to say and there's not a damn thing that you or any Trump fanatic can do about it.

"What about antagonizing fans?"

Jackson had a swift answer for that question and you guessed it, it involves more than just a few curses. "I know how many m*therf*ckers hate me," he starts.

"If you never went to another movie I did in my life, I’m not going to lose any money. I already cashed that check. F*ck you." It doesn't seem as if Samuel L. Jackson's very apologetic for his critiques and he's certainly not going to give Trump fans the satisfaction of thinking that they could have an effect on his career, not even a tiny bit of an effect.

He continued, talking about how people are always trying to silence him.

"'You’re an actor. Stick to acting.' No, m*therf*cker. I’m a human being that feels a certain way. And some of this sh*t does affect me because if we don’t have health care, sh*t, and my relatives get sick, they’re going to call my rich ass. I want them to have health care. I want them to be able to take care of themselves. This is how I feel. And I count to one hundred some days before I hit 'send,' because I know how that sh*t is."

I don't blame him for standing against Trump. Have you heard some of the BS that comes out of the president's mouth?

Sometimes, all he has to do is open the Twitter app and press "tweet" and he's got us all wondering how he even managed to run for the position!

Have you all forgotten about this?

Trump made vile, stereotypical comments about Kzir and Ghazala Khan, the parents of the late Army Captain Humayun Khan, who was killed in action in Afghanistan.

The fallen soldier had given his life serving the country, only to be met with ignorance from the man who we now refer to as "President."

In a speech at the Democratic National Convention, Mr. Khan called out Trump's bigotry and lack of empathy saying: "Let me ask you, have you even read the U.S. Constitution? I will gladly lend you my copy."

Rather than responding to Mr. Khan, Trump decided to take a low blow instead. Shocker!

You would think that he would have a reply to the comments made by the parents or maybe offer a word of condolence for distraught parents who have just lost their son in a war-zone while defending the country. No, none of that.

Instead, all he had to say was this:

"She probably, maybe she wasn't allowed to have anything to say." Right... great response.

And this is only one of the many heartless things that he has done...

And Jackson's not the only famous face to have publicly called out Trump...

John Legend has also been extremely vocal about what he thinks of the president. And it may or may not involve as many curses as Jackson's comments...