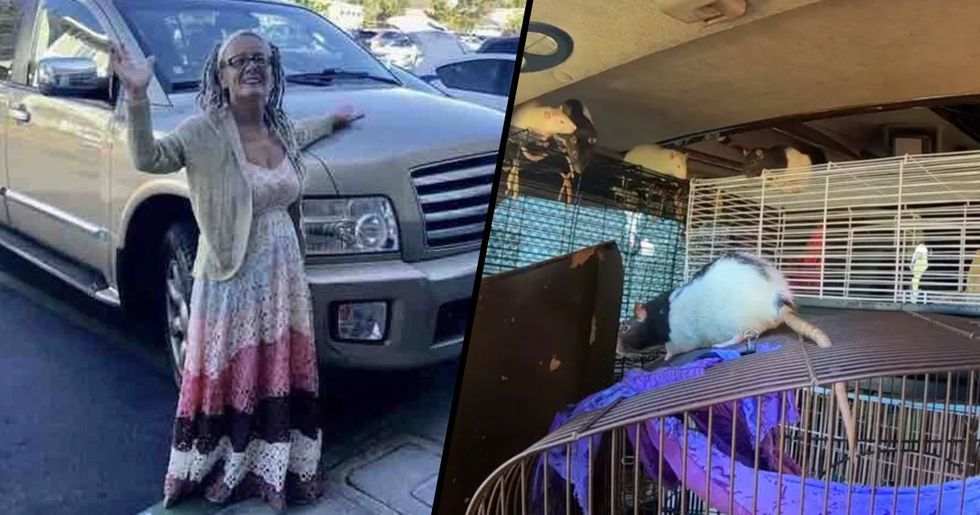 We're all for being an animal lover - but one woman from San Diego took things a little too far. The pet-enthusiast in question, known only as Carla, was discovered in the fancy neighborhood of Via de la Valle by the San Diego Humane Society living in a van with over three-hundred rats. Yep, you read that right.

After many people complained, the van was seized. But there's a surprisingly heartwarming end to the tale, as the entire community has come together to try to help Carla out of her rather odd situation.

There's one thing everyone on the internet seems to agree on.

Pets are almost universally accepted as forces for good in the world, and can really enhance a person's life.

And what pet you choose?

Well, that's totally up to you. Whether it's a cat, a dog, or something a little more exotic, the internet pretty much loves 'em all.

And even if you don't have the space...

Don't let that put you off. There are plenty of pet options for apartment dwellers.

But there is something to bear in mind.

If you do choose to become a pet owner, you need to be responsible with it. Certain pets can breed very quickly - and if not spayed or neutered, you can end up in quite a serious situation.

And there's one pet which is unquestionably the most controversial.

The rat. In spite of them being remarkably smart and loving, many still think of them as vermin - particularly when they're in large numbers.

And boy does this story have a lot of rats.

Over three hundred to be exact - and even worse? The rats were all living together in a van.

And what makes this story even stranger?

The story takes place in one of San Diego's most affluent suburbs - Via de la Valle, outside of Del Mar.

A woman, known only as Carla, found herself homeless after a streak of unfortunate luck.

Her only form of accommodation?

Carla was living in a van - and she wasn't alone. Keen for some company, she adopted two rats - but very quickly, the situation got out of control.

Rats reproduce very quickly, and can often have litters of up to twelve babies. Very quickly, Carla's situation was spiraling out of control.

Worried neighbors complained about the situation.

Not only was the van unsightly, but they were concerned about the safety of the rats. This led to an intervention by the San Diego Humane Society.

Carla had managed to maintain a job.

Her van remained parked by the convenience store where she worked - but without it, she risked losing her job.

The rats were everywhere.

Speaking to the San Diego Union-Tribune, Capt. Danee Cook said, "They could tell immediately that it was a huge amount (of rats). They were living out of the van, coming and going."

The rats were found "in every crevice."

Including inside the seats, within the upholstery, and around the engine and wiring. And to make matters worse? Many of the rats were also pregnant.

Meaning the amount of rats is set to grow.

Rats have a gestation period of just four weeks, meaning it really didn't take long for Carla's rat pair to multiply - and multiply, and multiply.

Unexpectedly, though, the rats were well cared for.

"She was feeding all of them, had water for all of them. This didn't meet the standards of hoarding. This was not a cruelty case, this was a relinquishment, an owner asking for help."

The rats are now living at different locations owned by the Humane Society.

In fact, you can adopt a pair for just $5 - and many more are expected to become available as these rats give birth.

And there's an even more heartwarming end to the story.

The community has set up a GoFundMe page to try to help save Carla, too. "She is an amazing person who has had a string of bad luck," writes organizer Vanessa Hodges Black. "She is NOT looking for a handout at all."

And it's had an incredible reception.

The page has already smashed through the $5,000 target - and one generous neighbor has even donated a new van for Carla.

Let's hope she keeps this one free of rats!

"The community should be VERY proud of themselves for stepping in to help another human being in need, not to mention the helpless rats."