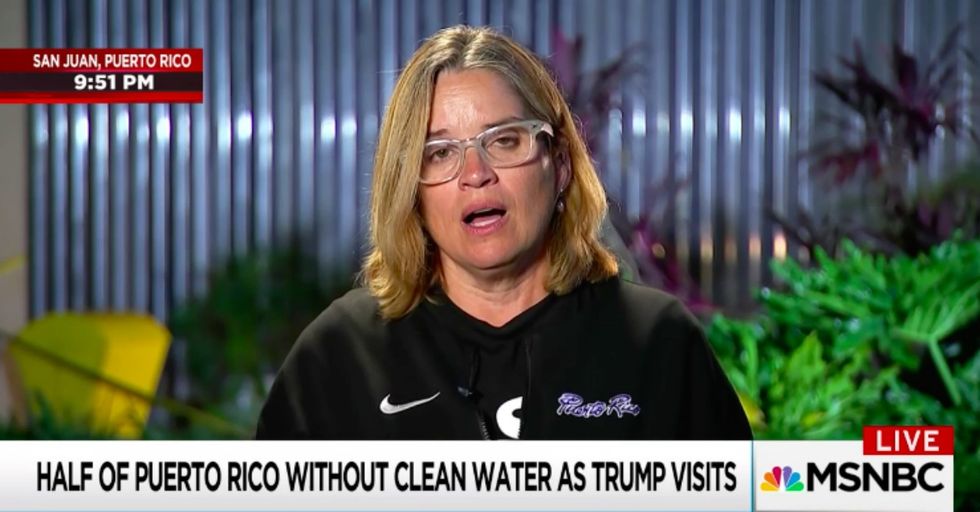 When Donald Trump arrived in Puerto Rico on October 3, he wasted no time making light of the disastrous conditions and joking about how the people of Puerto Rico are throwing "our budget out of whack."

Not very presidential, if you ask, well, many people, including the mayor of San Juan, Carmen Yulìn Cruz. In an interview on MSNBC, she let us know exactly what she thought of President Donald Trump's behavior.

Cruz has been in the news since she publicly slammed Donald Trump for the federal government's lack of adequate response to the disaster in Puerto Rico.

Following Hurricanes Irma and Maria, the entire island of Puerto Rico was left without power. People didn't have water, food, or supplies. U.S. citizens were going to die. Instead of sending help when Cruz begged, Donald Trump personally attacked her for being "nasty."

So when Trump arrived in Puerto Rico on October 3, the tension was already palpable.

In addition to Trump's earlier inappropriate remarks about the budget and comparing Puerto Rico to Katrina, there's the above video of him tossing paper towels into a crowd of people like he's giving away t-shirts at a ball game. These are people who have been without basic life necessities for weeks and he's treating them like a PR stunt.

Needless to say, Mayor Cruz was not happy, and she wasn't going to let Trump off the hook for his behavior.

In this moment, when Cruz and Trump shook hands, she said to him, "It's about saving lives. It's not about politics." Trump didn't even seem to hear her. In an interview on MSNBC, Cruz slammed Trump for his inappropriate comments and actions during his visit to Puerto Rico. "This was a PR, 17-minute meeting," Cruz said. "There was no exchange with anybody, none of the mayors. "In fact, this terrible and abominable view of him throwing paper towels and throwing provisions at people, it really — it does not embody the spirit of the American nation... "He was insulting to the people of Puerto Rico."

She went on to describe how people are dying. They can't get the supplies they need. People who need medical attention have no way of getting treatment. The situation is dire.

Meeting with WH staff productive. They REALLY understood the disconnect between how things are supposed to happen and how they really happen
— Carmen Yulín Cruz (@Carmen Yulín Cruz)1507060204.0

And while Cruz did call Trump the "miscommunicator-in-chief," she tweeted and spoke about the fact that the White House staff — not including Trump — have been supportive and really understood how things need to happen.

Cruz's goal is not to pick a fight with the President of the United States. It's to save the people of Puerto Rico.

Hopefully the newly open channels of communication with WH staff will put in motion what is needed to accomplish our goal: save lives.
— Carmen Yulín Cruz (@Carmen Yulín Cruz)1507060402.0

And while the president has acted incredibly irresponsibly, Cruz has expressed that the White House staff is trying to do what they can to open avenues of communication in order to accomplish the only goal here, which is to save people's lives.