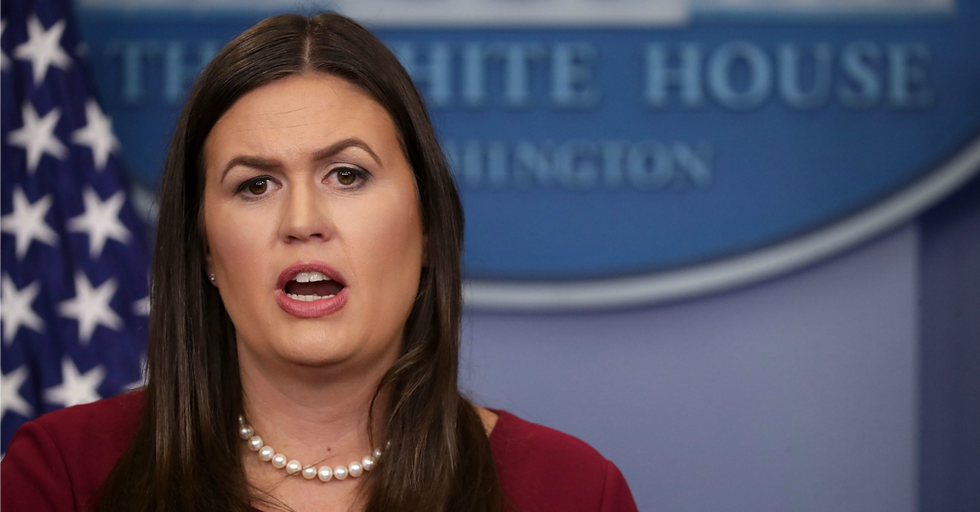 Her slip-up during September 5th's White House press briefing is one for the ages.

You have to see it. It's amazing.

It's only been a few months so far, but while she might regularly spew lies and try to defend Trump's indefensible actions, she hasn't quite lived up to the parade of gaffes that was Sean Spicer.

Ol' Spicey Spicemaster. We miss you.

He was only the press secretary for six months, but in that time, he gifted us a veritable article's worth of major fails. From tweeting out his passwords to wearing mismatched shoes to sincerely retweeting The Onion, we could always look behind the White House press podium if we needed a good chuckle.

Then, the universe was like, "No, you're not laughing enough," and suddenly, there was Anthony Scaramucci.

His whirlwind "career" as White House communications director only lasted 10 days, but it was...quite a 10 days.

Once Scaramucci was out and Spicer resigned, Huckabee Sanders swooped in.

Ever since then, things have pretty much just been normal bad. It's really disappointing.

Who will Melissa McCarthy even play this season on SNL?

Well, come to think of it, McCarthy could pull off a pretty good Sarah Huckabee Sanders. And now, she has good reason to. Huckabee Sanders finally gave us a worthy gaffe during September 5th's White House press briefing. You have to hear it to believe it.

While discussing the administration's horrific plan to phase out DACA, Huckabee Sanders misspoke.

"President Obama is laying out a responsible, 24-month phase out." She continues to speak before she's interrupted by reporters. She apologizes, saying, "Sorry, President Trump." Then, she smiles and laughs. The craziest part is that it looks likes she's reading from a piece of paper! Did someone prank her? Or was it a true Freudian slip?

"We all wish it was Obama," this Twitter user wrote, echoing the sentiments of pretty much everyone.

Stephen Colbert made fun of the slip-up on his show.

Skip to 3:58 for the Huckabee Sanders section, but also watch the rest of it to hear Colbert's spot-on Jeff Sessions and Trump impressions. Following the clip of Huckabee Sanders "Obama" mention, Colbert simply says, "It's OK. We're sorry he's president too."

Some think this is the last we see of Sarah Huckabee Sanders.

Though I don't know why. It's not like Trump particularly likes to tell people they're fired or anything...

We get it. You have to pretend to be on Trump's side because you work for him. But now, there's a crack in the foundation. Let it out, Sarah. We're here for you.

Mostly though, people just thought it was hilarious.

An entire room of fancily dressed people is laughing at Sarah Huckabee Sanders' "Obama" gaffe. Wonder why. It might have something to do with the fact that Trump pushed birtherism for years and is spending his presidency trying to undo everything Obama did for the sole reason that he hates that a black man was president. Or something.

Let's not forget about Obama's feelings during this time.

A moment of silence for Barack Obama, a truly incredible president whose good name was dragged through the mud when it was mistaken for that of a melting orange toddler.

One can only assume that if Trump's people allow him to find out about this, he won't be happy.

We'll be here with our hands over our mouths, awaiting what promises to be his totally childish response to Huckabee Sanders' mistake. In the meantime, Sarah, why don't you give Spicey a call? He's been through this before. He probably has some tips for ya.