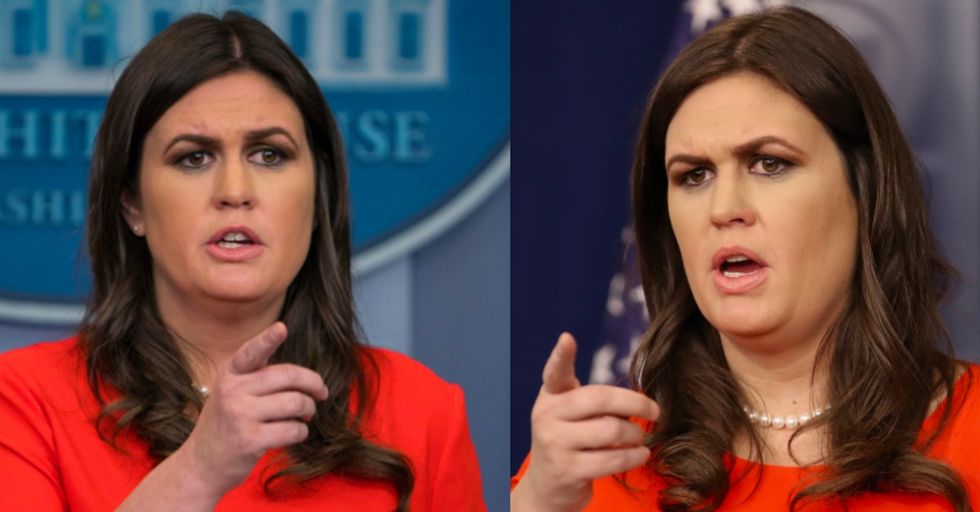 Sarah Huckabee Sanders Admits to the Press What Trump's 'Flaw' Is

Welcome back to the United States' newest, hottest daily soap opera, White House Press Briefing. Last time, we watched Sarah Huckabee Sanders face off against common sense and decency when she defended John Kelly's comments about how the Civil War could have been avoided if people just compromised better. The episode ended with Sanders flying off in a huff while refusing to answer April Ryan's question: Was slavery bad?

The cliffhanger was almost too much for fans to handle, but luckily, the show came back the next day — as it always does — with even more dramatic twists and turns. The plot thickened in this episode, in which Sanders was forced to answer the question, "What are Donald Trump's flaws?"

No doubt the answer will shock you. White House Press Briefing is proving to be America's favorite soap opera that we also hope comes to a crashing and burning end anyyyy day now. Seriously, any day.

During the last episode of White House Press Briefing, Sarah Huckabee Sanders fumbled through a weird defense of John Kelly and Civil War Confederate general Robert E. Lee by saying that all of our leaders are flawed. So this episode, a journalist decided to ask her what Donald Trump's flaws are. He is a "leader," so according to Sanders, he must be flawed too. Her response?

"Probably that he has to deal with you guys on a daily basis," she said, before quickly trying to call on someone else. But the journalist wouldn't let her off the hook that easy. "In fairness, he doesn't deal with us on a daily basis," he said, which is objectively the truth. "I think most every day actually he does," Sanders replied, which is objectively a lie. "So what are his flaws then, I guess," the reporter offered again. "Simple question." "I just gave you one," Sanders responded.

There are a couple things wrong with this response.

First, having to deal with the press is not a flaw of the president. That's not how words or ideas or logic work, Sarah!!!! You don't get to be snarky while ignoring legitimate questions. Second of all, we could be here for the next billion years listing off Trump's flaws one by one — you couldn't even think of one press-room-friendly flaw to spout off?

@EkbMary @kylegriffin1 She thinks she's funny and above the press. I have never witnessed a WH with this much misplaced arrogance.
— hulibow (@hulibow)1509566106.0

We live in a society with a free press. To repeatedly cry "fake news" and paint legitimate press outlets as nothing more than pests or jokes is doing untold amounts of harm to the systems we have in place to keep dangerous people like Donald Trump from destroying our very way of life. But sure, Sarah, laugh off a legitimate question from a reporter and treat the press like troublesome children.

Since Sanders wouldn't take the reporter's question seriously, April Ryan tried to fire back again about yesterday, when Sanders refused to answer her question about whether or not the White House would state that slavery was wrong.

"Does this administration believe, does the president believe slavery was wrong?" Ryan asked Sanders, who was more than irritated about the question that has such an obvious answer it's hard to imagine her getting it wrong again. Ryan launched into an anecdote about Civil War compromise, citing the historian Mary Frances Berry, but before she could get her point across, Sanders answered: "I think it is disgusting and absurd to suggest that anyone inside of this building would support slavery." Then why did it take the White House a day to say this? Why do top White House officials continually try to erase slavery from the discussion about the Civil War? Why does Donald Trump want to save our Confederate statues? Why does he refuse to denounce white supremacy in this county? Ooh, wait, we just answered the first question. You know, the one about the flaws.