In fact, part of why everyone loves Oprah is that we have no real idea what her politics are. | 22 Words 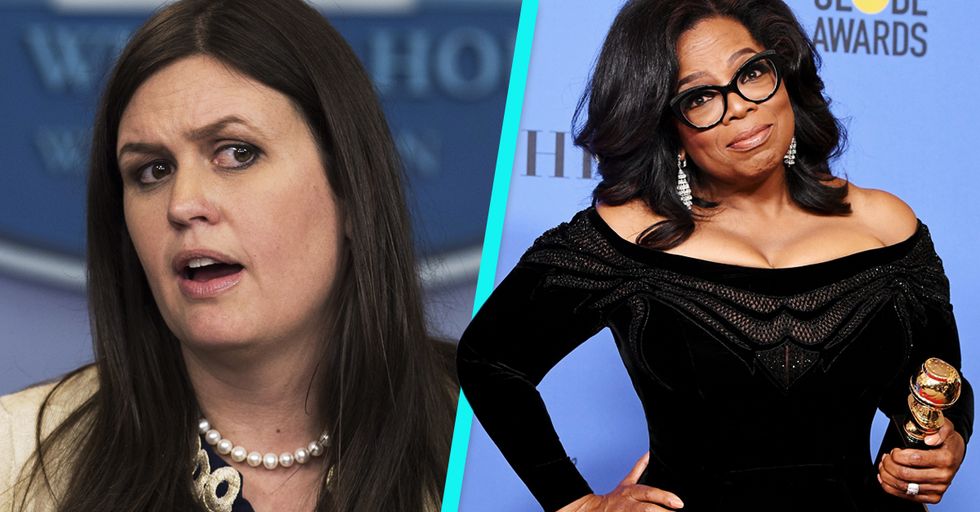 Man, I'd feel really bad for Sarah Huckabee Sanders if she wasn't a straight puppet of the Trump administration. She just messes up so darn much!

Her latest gaffe came when reporters asked her about Oprah running for president, you know, that remote possibility that probably isn't the greatest idea?

Sarah Huckabee Sanders made the mistake of treating Oprah like she's already a candidate, with a platform and policies and everything, clearly forgetting that the woman hasn't even said if she'd run yet!

It did not go well for her. Because a certain boss of hers gets pretty Twitter-trigger-happy, and he might start World War III because of it.

There was also that time she refused to denounce slavery on national television.

That moment might even be worse than the Ted Lieu tweet. What do you think? Just a li'l bit?

Perhaps the worst Sarah Huckabee Sanders gaffe of all was that time she got into a war with reporters over homemade pie.

Ingredients all mixed up and pies in the oven! @AprilDRyan let me know if you need further documentation #piegate https://t.co/OVYLg1gBgO
— Kayleigh McEnany (@Kayleigh McEnany)1513222266.0

Here's the thing, Sarah. Donald Trump is the president and you are an active participant in his attempt to dismantle our democracy. You don't get to joke about pies.

This Oprah moment is the best in a while though. When a reporter asks Sanders for her thoughts about the possibility that another D.C. outsider like Oprah running for president, Sanders' response is priceless.

"I disagree very much on her policies," Sanders said. "Is she a successful individual? Absolutely, but in terms of where she stands on a number of positions, I would find a lot of problems with that."

Um, excuse me, but hhhhwhat?

Because yes, Oprah did give a kickass speech at the Golden Globes.

She spoke eloquently and passionately about the #metoo movement and about her support for all women. What she didn't at all mention were her political leanings or her stance on foreign policy.

In fact, part of why everyone loves Oprah is that we have no real idea what her politics are.

Sure, she loved Obama (who didn't?!) and doesn't seem to be too keen on Trump (who is?!), but she's never really been a political figure. We know she likes books — she has a whole club dedicated to them — and cars (giving them away, mainly).

Oh yeah, and bread. She really loves bread. But other than that, Oprah has no policies.

This makes it completely wrong and unacceptable (some would even say racist) for Sarah Huckabee Sanders to disagree with them. You know, because they don't exist.

The only policy Oprah spoke boldly about at the Golden Globes was respecting and supporting and lifting up women.

If Sarah Huckabee Sanders disagrees with that (which she does because she supports Trump), that's saying something.

In case you missed it the first time:

Oprah has no policies. What Sarah Huckabee Sanders seems to disagree with is Oprah's commitment to viewing women as strong, capable human beings. That's probably not what she meant to say, but that's definitely how it came across. Oops.