Sarah Huckabee Sanders Just Promised Everyone $4,000 — but That's Not How Math Works | 22 Words 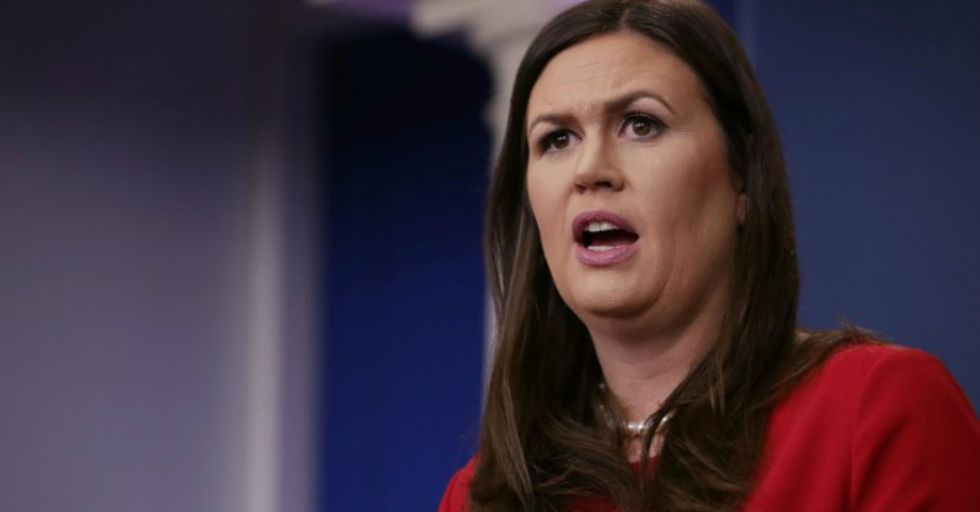 Sarah Huckabee Sanders Just Promised Everyone $4,000 — but That's Not How Math Works

Sarah Huckabee Sanders doesn't have an easy job. As the White House Press Secretary, it's literally her job to act as the spokesperson for the executive branch of the U.S. government. Like, the whole executive branch. Even that one guy. It can't be easy to stand up on an almost daily basis and defend the president's crazed and hyperbolic tweets.

But earlier this week, Sanders was in hot water for a tweet of her own. It contained a convenient misunderstanding of one of the world's handiest tools: math.

A recent tweet from Sarah Huckabee Sanders seems to show that she may not have the firmest grasp on how mathematics work.

And that's not the worst thing in the world. Not everyone can know everything. Sanders' days are already pretty full. But this time, her misunderstanding of math has a real effect on many Americans' lives.

On Sunday, Sanders tweeted the following:

The average American family would get a $4,000 raise under the President’s tax cut plan. So how could any member of Congress be against it?
— Kayleigh McEnany (@Kayleigh McEnany)1508715477.0

According to her, Trump's tax cut plans would result in the average American family getting a $4,000 raise. Sounds great, right?

There's just one problem. That's not how averages work.

As you'll probably recall from your middle school math class, an average is found by taking the sum of a group of numbers and then dividing it by the amount of numbers in that group. Another important lesson from middle school is that averages are not always the best number to use to sum up data. This is because particularly high or low numbers can drastically skew the data. For instance, mathematically speaking, the average person has less than two legs. That may seem like a ridiculous statement, but it follows the same logic as Sanders' claim that the average family will get $4,000. Some families will get a lot of money, but most families will get virtually nothing. It all boils down to this: The tax cuts Sanders is tweeting about would actually mean that the top 1 percent of people would get 80 percent of the revenue.

Luckily for Sanders, the Internet was ready to give her a quick math lesson.

If I give 10 apples to one person and no apples to nine people, the average person has one apple. Why are nine pe… https://t.co/oRyAU7Uhbh
— Franklin Leonard (@Franklin Leonard)1508717623.0

You can always count on the Internet to let you know exactly how wrong you are about something. It's both a gift and a curse.

Here's another handy breakdown of the numbers.

See what we mean? The huge tax cuts that will only apply to the very rich 1 percent of people will completely skew the average. Sanders still wasn't done tweeting about that $4,000, though...

She doubled down on the $4,000 amount and asked people what they would do with that money (which, again, they would not actually ever get).

She even asked people to reply so she could share people's plans in her next press briefing. What a treat!

This person had the right idea:

If you happen to see an extra $4,000 in your account, we recommend you follow this Twitter user's lead. But you won't. Because that's not how math works.